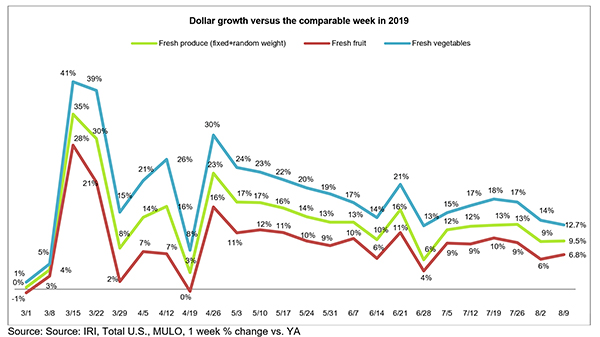 The second full week of August was the fifth of eight non-holiday weeks between Independence Day and Labor Day, in which everyday demand alone had to drive the sales performance. Consumer concern over the COVID-19 pandemic remained highly elevated and several severe weather events rendered many households along the eastern seaboard and Iowa without power.

Additionally, economic pressure is being compounded by uncertainty over the extension of unemployment benefits and second round of stimulus payments.

“IRI primary shopper research released August 11 found that that if Americans were to receive a second stimulus check from the U.S. government, they would be more likely to spend it on meat and produce than other food and beverages,” said Jonna Parker, Team Lead, Fresh for IRI. “In all, 21% of consumers said they would buy more meat, 20% more produce and 7% would purchase restaurant meals more often. This shows the fresh produce department performance is closely tied to financial strength. However, we also asked how the loss of a weekly unemployment benefit of $600 might affect shopping behavior. The top answer among current beneficiaries of the benefit was buy less meat at 35%, followed by buy fewer fresh fruits and vegetables at 29%, buy fewer premium products at 24%, switch more purchases to store brands versus national brands at 19%, and buy fewer convenient meals to instead cook from scratch at 18%.”

210 Analytics, IRI and PMA partnered to understand fresh produce sales at retail throughout the pandemic.

The net result for fresh produce was an increase of 9.5% over year ago during the week ending August 9 — stable over the prior week and on par with the total store trend of 9.4%. Frozen and shelf-stable fruits and vegetables had higher percentage gains but off a smaller base, with particular strength for frozen, at +20.2%. Year-to-date through August , fresh produce department sales are up 11.1% over the same time period in 2019. Frozen fruit and vegetables increased the most, up 27.4% year-to-date.

“Economic pressure tends to have big impacts on grocery shopping, including channel choice, the type of items and quantity bought, the importance of price and promotions and more,” said Joe Watson, VP of Membership and Engagement for the Produce Marketing Association (PMA). “During the next few weeks and months, it will be important to highlight the great value of fresh produce and home cooking. At the same time, consumers appreciate help with recipe ideas and meal planning as that is an increasing area of struggle. We will also keep an eye on back-to-school that will look very differently this year, which will once more impact year-over-year trending.”

Fresh produce generated $1.35 billion in sales the week ending August 9 — an additional $117 million in fresh produce sales over the prior year. This is below the pandemic average for additional dollars, at $177 million per week, as everyday demand continues to see a bit of a slow erosion week to week.

“During the week of August 9, we saw a strong performance of summer fruits and the smallest performance gap between fruit and vegetables we have seen in a long time,” said Watson.

Fruit’s pandemic performance has been a bit more up and down than vegetables. The growth rate for fresh fruit increased versus the prior week level, at +6.8%.

Vegetable gains, while 12.7% ahead of last year, saw the lowest increase since the start of the pandemic sales patterns in mid March, with the exception of the week ending April 19, which went up against the Easter 2019 sales numbers.

“These results certainly show that fruit has big potential in summer,” said Parker. “I suspect decisions on whether kids go back to school in person or partake in education virtually will have a big impact on fruits’ performance in the next few weeks and months.”

Dollar gains continued to track ahead of volume gains ever since the week of May 24. But while dollar gains for total produce increased, volume gains decreased — leaving a wider gap. For total produce, dollars tracked 2.6 percentage points ahead of volume the week of August  2nd and 3.7 points the week ending August 9 — pointing to slightly higher inflationary pressure than we have been seeing. Additionally, the total department view is a bit misleading with many areas seeing double-digit inflation or deflation.

Both fruit and vegetables saw dollar sales gains track ahead of volume gains, but the gap was significantly larger for fruit. Fruit volume gained 2.7% over the same week last year, showing demand is up but not quite keeping pace with other foods. Vegetable volume growth remained in double digits during the week ending August  9.

While overall produce inflation was relatively mild at +3.5% versus 2019, supply and demand continue to be out of sync in many areas, causing double digit gaps in dollar gains and volume gains in either direction. Ample supply drove double-digit deflation for items such as pomegranates, avocados and plums. On the other hand, dollar gains far outpaced volume due to double-digit inflation for items such as mangoes, berries and cucumbers. This was the first in many weeks that both corn and cherries were back in single-digit, year-over-year inflation.

The grocery channel is the main beneficiary of the channel switching that has taken place amid the pandemic as many shoppers aimed to minimize the number of trips to the store. Particularly during late March and early April, when shelter-in-place mandates were in force for the majority of states, supermarkets’ share of market grew. Channels that have lost some share for fresh produce sales amid the pandemic include specialty grocery, discounters and mass/supercenters.

The top 10 in absolute dollar gains completely changed from the week prior yet again. Taking over from tomatoes, cherries contributed $12.6 million in new sales versus year ago as the number one in absolute dollar gains. Lettuce was second with a gain of $12 million. Tomatoes dropped from first to third and berries from second to fourth.

“The top 10 in absolute dollar gains shows how much sales contributions can change each week,” said Watson. “The strength of fruit sales this week is reflected by an equal division of the top 10 in absolute growth in fruit and vegetables. In fruit, cherries, berries, melons, oranges and lemons all made the top 10. Oranges, the pandemic consumer favorite with its numerous immunity benefits, made it back into the top 10 on weaker corn and onion gains, that dropped out of the top 10.”

“In fruit, berries and melons dominated total weekly sales the second week of August,” said Watson. “One important reason why fruit sales are falling behind vegetables each week is because three categories lost ground versus year ago. In other cases, such as avocados, demand is very high but dollar sales gains were pulled down because of continued double-digit deflation.”

During the week of August 9, double-digit gains in the top 10 sellers were reserved for cherries, tangerines and oranges. Oranges jumped back into the top 10 biggest sellers with year-over-year gains of +29.4%. Sales of apples, grapes and bananas tracked in negative territory versus year ago.

“While in fruit sales gains were a mix of double-digit, single digit and negative growth, all top 10 vegetables increased in dollar sales versus year ago and seven in 10 did so with double-digit gains,” said Watson.

The order and items in the top 10 sellers was unchanged from the prior week, with the exception of broccoli that gained a spot as the new number nine on the list. Lettuce was the dominant seller, more than twice the size of number two, tomatoes, yet up 7.8% versus the same week year ago.

A big part of total lettuce sales was made up by fresh-cut (bagged) salad. Dollar gains for fresh cut salad remained stable, at +7.7%. Volume sales increased 5.2%.

All temperature states of fruit and vegetables had double-digit gains during the week of August 9, with the exception of fresh fruit. Frozen fruit had particularly high gains this week, at +33.2%. The continued strength of frozen fruits and vegetables goes hand-in-hand with strong frozen foods performance overall.

Floral sales at retail had another strong week, up 11.1% over the same week last year. With the exception of the week of May 17, sales have been in positive territory since early May.

The fresh perimeter performance equaled that of total store, but center store edible sales once more outpaced both during the week of August 9. The fresh perimeter gain of +8.9% was driven by strong meat and seafood sales. Produce’s performance was also slightly above the fresh average. Total deli, which encompasses non-UPC, random-weight deli cheese, meat and prepared foods, remained pressured, due to heightened pressure on the foodservice offering.

Consumer concern over COVID-19 is high but stable. Everyday spending on groceries, including fresh produce, will increasingly depend on shoppers’ individual financial situation as economic pressure and uncertainty is mounting. Back-to-school season is in full swing, though it looks very differently from prior years in most states. This will continue to impact year-over-year trend lines, particularly for produce items affected by breakfast and lunch occasions with many more children at home while participating in virtual education.

Between the continued social distancing mandates, highly elevated consumer concern about the virus, economic pressure and the impact of virtual schooling, produce sales are likely to remain highly elevated for the foreseeable future.