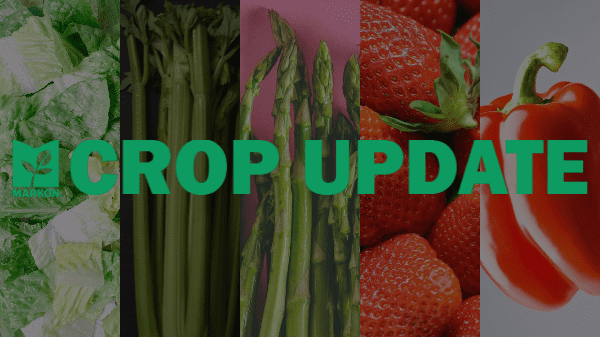 Most crops have a hard time adjusting to changing demand, so the pandemic, which shut down most restaurant dining rooms in mid-March has caused wild swings in many fruit and vegetable markets.

But in a few months, we’ll start to see some adjustments to planting, said Mark Shaw, vice president of operations for Markon Cooperative, BB #:123315 Salinas, CA.

Blue Book has partnered with Markon to provide crop analysis from Markon’s Fresh Crop Report, which it releases each week.

In early May, lettuce is being grown in the Salinas Valley, Santa Maria and Oxnard areas of California.

In the meantime, many lettuce varieties will be a good value for buyers.

Other crops are in transition, so supplies are lighter and prices higher.

Peppers: Prices are still on the rise for green and red peppers, Shaw said. The Mexican season is ending quickly, and Florida is transitioning from winter supplies to spring, so volumes should be low and prices higher until about mid-May.

Asparagus: Prices are rising as the northern Mexico season is winding down. Domestic supplies from Michigan and Washington are still a week or two from hitting the market in any kind of volume.

Celery: Prices have been on the rise for several weeks. Supplies are mainly from the Oxnard area, and rain and cold in April has slowed growth, as has the soil disease fusarium, Shaw said, which has reduced yields and sizing. “There’s no relief until the Salinas area starts in three to four weeks,” he said.

Tomatoes: Mexican crossings have been below normal, and cooler weather is also limiting volume. Florida supplies have struggled to produce strong volume, but Shaw expects volume to rise in the next few weeks. He said the high prices should start to come down by mid-May.

Strawberries: All three California growing regions are producing volume now. Quality is very good, he said, and with the heavy supplies, prices are pretty low and should continue for several weeks.

Onions: The Northwest storage onion season is ending, and quality is struggling to match that of new crops. Fresh-run onions from California, Mexico, and Texas are now available. Supplies from New Mexico will enter the market in early May.