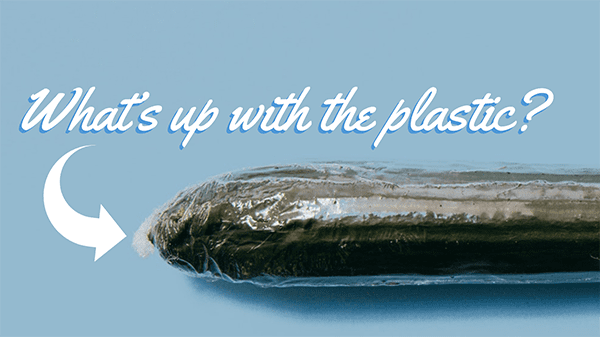 A new study by Wrap, a British organization promoting sustainability, has released a study contending that wrapping certain fresh produce items, notably apples, potatoes, bananas, broccoli, and cucumbers in plastic is not necessary and promotes waste.

Marcus Gover, Wrap’s chief executive, said the organization’s 18-month study indicated that plastic wrap “doesn’t necessarily prolong the life of uncut fresh produce,” adding, “It can in fact increase food waste in this case”—in part because packaging multiple items together may cause people to buy more than they need.

“We found that for most items, the plastic packaging they were sold in made little or no difference to their shelf life,” Gover added. Buying the right quantity and storing them properly (for example, keeping apples in the refrigerator) were far more significant as savings measures.

The produce items studied were among the more durable (potatoes, apples, and bananas). An equivalent study covering more delicate items might conclude otherwise.

In relation to cucumbers, one Swiss study contends the opposite: “Cucumber wrapping leads to food waste reduction and results in a net benefit in climate change impact in the current supply chain, even when the added impacts of the packaging are taken into account. Every unwrapped cucumber thrown away has the same impact on climate change as the amount of plastic used to wrap 93 cucumbers.”

Both the Wrap study (as reported in the general media) and the Swiss study significantly omit mentioning which kind of cucumbers is in question. The familiar slicer cucumbers have a thick skin, which protects them more. As a result, they are usually sold unpeeled (although they are often waxed), while English cucumbers are more thin-skinned and so are usually sold wrapped.

Although it is plausible to argue that plastic wrapping does not add much to the life of potatoes or bananas, it would seem that the answer for cucumbers would very much depend on the type in question.

Whether this is so or not, the produce industry overall seems to be following trends in most other industries—more packaging, rather than less.