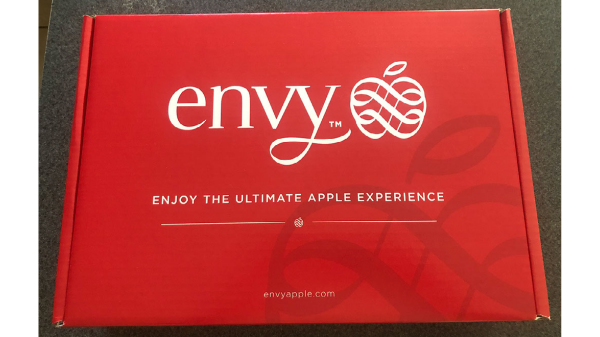 “Jonagold. Granny Smith. Pink Lady. Cosmic Crisp. Gala. These names may sound exotic to us today, but in the early twenty-first century, they were among Americans’ favorite types of apple.”

So may write a produce reporter in the future.

The apple is (we hope) eternal, but varieties of the versatile fruit come and go according to needs and tastes. Unlike Americans a century ago, few of today’s consumers are likely to care whether a particular variety will store well over the winter in a cellar barrel.

The Envy variety caught my attention when it was named as a “kitchen essential”. The website promoting it said, “A brilliant cross of Braeburn and Royal Gala, Envy apples make all the other apples jealous. You know . . . if apples had feelings. Each one is crisp and refreshingly sweet.”

I searched (though not exhaustively) for Envys in my area—Blue Book Land in the far western suburbs of Chicago—but didn’t come across any. (Evidently, they are carried many local Jewel Osco’s, among other chains.)

I mentioned my lack of Envy in a previous column, and Cristie Mather, vice president for food for Curious Plot, reading this, remedied the problem by kindly sending me a box of the apples.

I will give you an uncensored version of my first response upon biting into an Envy: “Wow! This is the best apple ever!” A more objective description would mention its bright, uncomplicated sweetness along with a distinct crispness and pleasant aroma.

Others agree. One consumer survey, conducted in 2019 by Forward Agency, ranked Envys as number one for taste, crispness, aroma, and appearance. As of August 2021, Nielsen AOD data shows that Envy was the best-selling premium branded apple for more than 52 weeks.

Even so, Envy will not necessarily be everyone’s favorite. My taste in apples tends toward the sweet; I shy away from tart and sour flavors in general (too much lemon in the Dover sole for last week’s dinner, for example).

I would imagine that people who love tart tastes will stick to something like the Granny Smith, while those who like a nuanced blend of tart and sweet will go with one of the variations on the Honeycrisp.

My friend Francis, who bought two Envys in a Providence, RI, Trader Joe’s, liked them and pronounced them “sweet” but said he preferred Gala and Pink Lady.

Actually, “Envy” is the trademarked name for the Scilate variety, the result of a natural cross between Royal Gala and Braeburn. It was developed by T&G Global, Ltd. BB #:163999, in New Zealand in 2008.

Envy apples are available in the U.S. market year-round, with the apple being grown in both Northern and Southern hemispheres. In the U.S., Envy is grown in Washington State and sold by Oppy, Rainier Fruit, and CMI Orchards between November and May. From June to October, the U.S. supply is imported from New Zealand and Chile. (The ones I sampled were from New Zealand.)

Today Envy apples are grown under license in thirteen countries worldwide and sold to consumers in more than sixty countries.

All evidence indicates that it will be a very long time before Envy is added to the list of obsolete apple varieties.