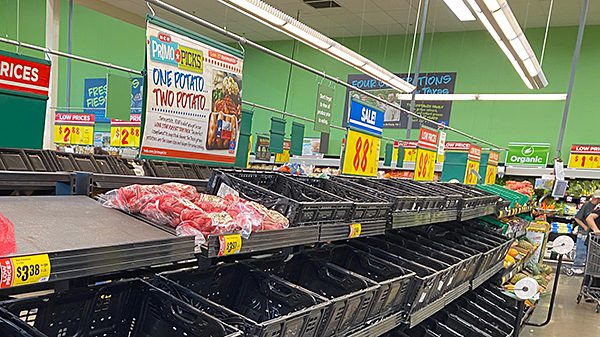 The potato aisle at my H-E-B is one of the few in fresh produce that has been consistently picked clean by pantry-stocking consumers. Potato sales were up 72% year-over-year growth in the week ending March 15.

Panic buying caused a 77% surge in meat sales, but there’s one vegetable keeping up with that pace.

While we saw noticeable gains in fresh produce sales the week ending March 8, it was the second week in March that many industry observers, including myself, were waiting to see.

What kind of insane sales numbers would retail see thanks to panic-stricken consumers and their coronavirus stock-ups?

Well, they’re here. The week ending Saturday March 15 saw a year-over-year jump in sales of more than 33%, according to analysis by IRI and 210 Analytics.

Vegetables were the big winner—up more than 40%—led by a commodity that shouldn’t surprise you.

Potato sales were up more than 72% in consumer frenzy-buying to stock their “pandemic pantries.” Greg Johnson reported yesterday that the Idaho Potato Commission is seeing demand exceed the holidays, and that’s saying something.

In the first rush of shopping, people are filling their pantries for the long haul.

I’ve read a few reasons why consumers are flocking to potatoes, but I think the biggest factor is perishability. Consumers don’t know what’s going to happen over the next few weeks. Stores don’t appear to have much stock, although we’ve heard from multiple sources that if the panic-buying would ease off for just 5-7 days, the supply chain could catch up.

That’s not happening in my neighborhood. I see posts several times a day with people looking for items they can’t find at the store or asking what the stock levels look like at the store.

The Costco near my house posts out-of-stocks on a white board daily, and the line stretches around the building (helped in part by the 6-foot separation between customers).

People are not letting up – yet.

While fresh produce lagged behind non-perishables and the easily-frozen meat in outrageous growth, it’s not like people aren’t buying it.

I think the gains in canned and frozen will level out quickly – there’s only so much pantry space available — but produce will continue to post double-digit year-over-year growth as long as foodservice is out of the picture.

Speaking of, the next big items to post huge year-over-year gains likely will be related to foodservice, as the items in the supply chain that typically go to restaurants and institutional accounts (PLOT – Potatoes, Lettuce, Onions, Tomatoes) will find their way to retail, priced to move FAST.

I already see huge displays of “salad tomatoes” at my local H-E-B, and I rarely see those get any shelf space.

Anne-Marie Roerink of 210 Analytics, and Jonna Parker of IRI plan to continue producing weekly sales reports during the COVID-19 crisis, so stay tuned for more from this series.