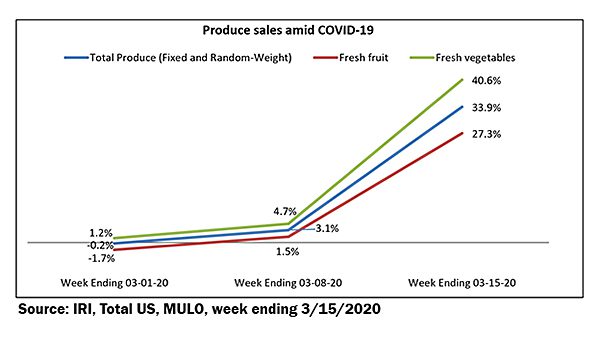 As coranavirus social distancing measures are tightening and the number of confirmed cases are growing, retail sales are surging. Shoppers are stocking up on staples and fresh foods, and produce is no exception.

Over the week ending March 15, total produce sales increased by more than one-third over the comparable week in 2019. Vegetables were up nearly 41% over 2019 and added $242.2 million. Fruits gained 27% over the week of March 15, which translated into an additional $150.2 million.

According to Jonna Parker, Team Lead, Fresh for IRI, the sales increases are near universal across all fresh produce, both fixed and random weight. “We’re seeing big gains for nearly all fresh fruits and vegetables with incredible acceleration for items such as potatoes, yams, oranges and mandarins. Additionally, shoppers’ stock-up mindset is driving a huge surge in demand for frozen and shelf-stable fruits and vegetables that have longer shelf-life.”

While stocking fridges and freezers are a big part of the sales surge, home cooking and snacking became much more prevalent as well. The week of March 15 saw more school and office closures, increased working from home and some cities/states started mandating restaurant seating to be closed. Sales surges in apples, berries, oranges, etc. are without a doubt related to the desire to eat healthful snacks to build the immune system.

On the fresh vegetable side, shoppers are stocking up on items with longer shelf life, in particular. One of the most impressive categories were potatoes. Potatoes are the second largest vegetable seller with the highest growth, at +71.6%. The same is true for onions that generated more than $53 million in the week of March 15 and gained 59.2%.

It is important to remember that these kinds of sales surges are only possible thanks to the heroic work of the entire produce supply chain, from farm to retailer. As COVID-19 related measures continued to sharpen during the subsequent week, it is highly likely we’ll continue to see produce sales surge. 210 Analytics and IRI will provide weekly updates, every Tuesday.

Anne-Marie Roerink is the principal of 210 Analytics, a Lakeland, FL-based research firm focused on grocery and consumer behaviors. She is the author of the Power of Produce, the Power of Meat, and the Power of Deli, among other retail-focused research reports.