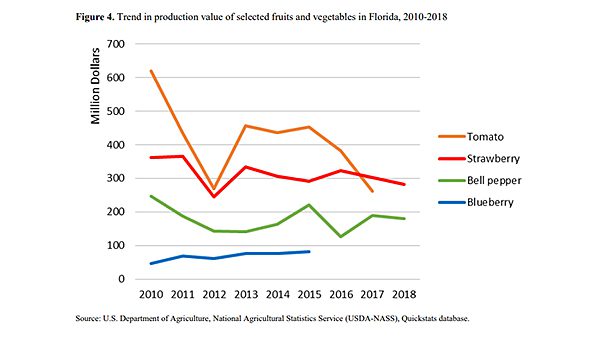 An Economic Impact Analysis from the University of Florida warns of significant losses for the Florida fresh produce industry if the current trajectory of Mexican imports continues.

The study, “Potential Economic Impacts in Florida of Increased Imports of Mexican Fruits and Vegetables,” analyzed three commodities — tomatoes, strawberries and bell peppers – and found that the production value of each decreased by 58%, 22% and 27% from 2010 to 2018, respectively.

The unsold volume, which researchers attributed to poor market conditions, nearly doubled in 2018 to more than 90 million pounds, or 2.7% of all vegetables produced, according to the study.

Researchers said in the study the passage of the North American Free Trade Agreement, hurricanes, competition, and regulations contributed to “significant” increases in Mexican imports, and the Trump Administration’s replacement for NAFTA provides no relief for U.S. producers.

“Similar to NAFTA, the current version of the proposed United States-Mexico-Canada Agreement (USMCA) does not provide protections for U.S. growers, particularly those that produce for the winter season market, from seasonal losses,” the report said.

Mexico “appears to be continuing to invest in infrastructure related to fruit and vegetable production,” and this is expected to contribute to significant losses for Florida growers.

With 25% growth, total losses in tomatoes, strawberries and bell peppers are forecast to be $88 million. With 50% import growth, losses are estimated at $266 million and losses are projected at $389 million with 75% import growth.

“Those losses reflect both depressed prices and abandonment of unharvested crops due to low market prices,” researchers said. “Strawberries would be abandoned during the last six weeks of the season in this scenario.”

The report echoes a recent study by the University of Georgia, which forecast “catastrophic” losses if protections for growers are not added to USMCA.

Agriculture Secretary Sonny Perdue pushed back against the remarks, saying the “sensational assertions are flat wrong,” and that “USMCA is good for Georgia’s Farmers and all American agriculture.”