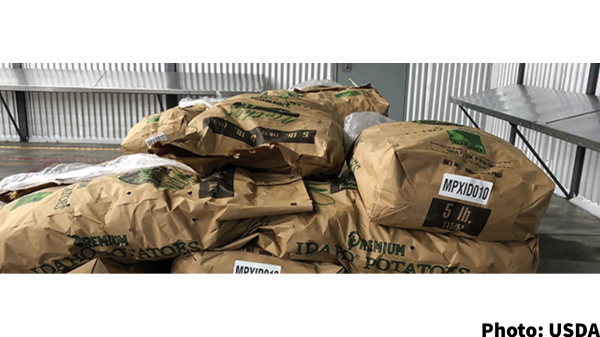 We have seen a day that the potato industry has long awaited.

USDA has announced that Mexico is granting full market access to U.S. potatoes, pursuant to the USMCA trade agreement.

Furthermore, Idaho has shipped its first load of potatoes to Mexico under the agreement, according to an announcement by Idaho senator Mike Crapo.

Previously the Mexican market was open to U.S. potatoes only along a roughly 16-mile (26-kilometer) area along the two nations’ border.

“Mexico is the largest export market for U.S. potatoes and products, valued at $394 million in 2021,” reports the National Potato Council.  “Despite the previous restriction to the 26-kilometer border region, Mexico was the second-largest market for fresh potato exports in 2021, accounting for 124,449 metric tons valued at $60 million last year. The U.S. potato industry estimates that access to the entire country for fresh U.S. potatoes will provide a market potential of $250 million per year, in five years.”

In the first week of April, USDA secretary Tom Vilsack and Mexican secretary of agriculture and rural development Victor Villalobos reached an agreement that finalized expanded access to the entire Mexican market no later than May 15.

Mexico and the United States had previously been involved in intricate negotiations about opening the U.S. market to Mexican avocados and the Mexican market to U.S. potatoes under the USMCA agreement. Mexico received expansion, but U.S. growers did not.

It is likely that the brief but sharp closing of the U.S. market to avocados in February (ostensibly due to phone threats against an American inspection worker) was a salvo in this battle.

It may have had its intended effect.

Nevertheless, the open market is not to be taken for granted.

“Addressing this decades-long dispute is a significant step forward in improving and strengthening our trade relationship with Mexico,” said Crapo. “While this is a positive development, we must continue to monitor Mexico’s compliance with USMCA to ensure every aspect is fully enforced and the agreement lives up to its full potential.”

“Today’s development has been a long time in the making. I’m glad to see this initial shipment of fresh Idaho potatoes granted access to Mexico, but this needs to be the first step of many,” said Idaho senator Jim Risch. “Potato growers in Idaho and across the country were promised meaningful market access more than 15 years ago, and Mexico has a responsibility to make good on its pledge to our farmers.”