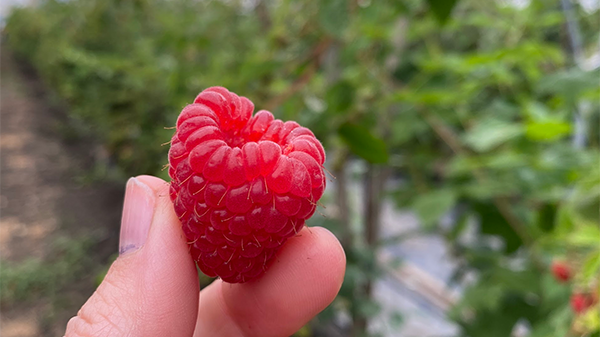 Raspberry availability has increased more than 350% in the past 10 years, thanks to greater supply…and a shift in consumer behavior.

It still shocks me when my family mows through a club store size clamshell of raspberries. I guess I come from a time when raspberries were a rare treat, served one per slice of cake, basically a garnish.

They came in the tiniest clamshell possible, a single-layer 3.4-ounce square, just a squishy burst of flavor.

Something changed about 10 years ago, from a consumer standpoint. The clamshells were no longer these miserly portions, sold for $4 or $5 each.

Instead, we’re seeing quadruple, or more, of the volume put into a club store package, but sold everywhere. I recall a tour of Rochester, NY-based Wegmans Pittsford store with Bill Pool, then director of produce safety, where he pointed to the club store size display of raspberry clamshells, saying Wegmans was one of the – if not the – top volume mover of raspberries in the U.S.

It was all thanks to the larger packs, he said. Consumers were starting to see them as a snacking option, not a guilty pleasure, a treasure to be hoarded and saved for a special occasion.

Behind the scenes, there’s a great explanation of raspberries’ steep increase in volume, consumption, and share of the category.

The U.S. Department of Agriculture started tracking availability of fresh raspberries in 1992. At that time, about 10.6 million pounds were available for food use, with the bulk produced in the U.S.

In 2019, the most recent year data is available, that number increased to 285.2 million pounds, up about 2,600 percent. The percentage increase is dramatic, of course, because of the small number to start with.

During that time, we saw a lot of dramatic changes, and market response, in the raspberry category. Imports ramped up quickly, from about 32 million pounds in 2010 to more than 200 million pounds in 2019. There was also a change in the way the USDA tracks U.S. production.

Without processed raspberries included, U.S. production continues to increase, though outpaced by imports.

What else was happening?

New varieties, bred to maintain flavor with a longer shelf life, specifically. Driscoll’s, the largest raspberry supplier in the U.S., found a “needle in a haystack” with its Maravilla variety, according to R&D director Fred Cook, in this article on the Driscoll’s site.

“Maravilla was an outlier—a total needle in the haystack. It’s a beautiful, glossy berry. It doesn’t mold, it doesn’t darken. It’s got a pretty good fruit size, and the yields are pretty good on the plant—it’s a very healthy plant. Maravilla raspberries aren’t too sweet, aren’t too sour, and have a consistent flavor,” Fred says with a smile.

The Watsonville-based company applied for a patent for Maravilla in 2002, and it was granted in 2004.

I toured the R&D facility for Driscoll’s this summer, plucking fresh fruit right off the vine. It was a marvelous experience to taste new varieties the company has in the pipeline.

The company is hoping to strike gold – or rose gold – with other varieties and has recently introduced specialties like Rosé berries and Sweetest Batch.

But I have to be honest. Of the half-a-dozen or so up-and-comers I tried, I’m still a huge Maravilla fan.

So, we have the perfect storm of supply increasing through domestic and import production, newer and hardier varieties able to make the trip to the store in good condition with extended shelf life, and better packaging to maintain that shelf life.

And, just as important—in my opinion—bigger packs.

Bigger clamshells sell more berries. I don’t just mean the simple numbers of the equation. A bigger container of raspberries changes the attitude consumers have toward snacking on them. There’s no hoarding, no rationing berries. Consumers can feel free to eat as many as they want.

They don’t have to feel guilty for their kids eating an entire clamshell in one sitting. Or before they’ve left the store (though of course it’d be great if your kids would let you wash them first…not that I have any firsthand experience with that problem…)

From a consumer—and avid raspberry fan—standpoint, the changes over the past decade have been nothing short of marvelous.