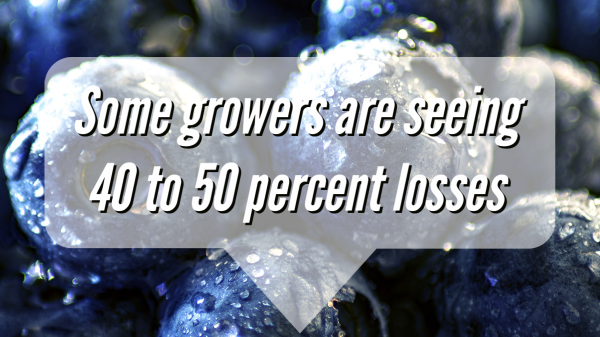 The record-breaking heat in the Pacific Northwest will lower yields for berries, with blueberries hit especially hard.

Some growers are seeing 40 to 50 percent losses and have asked Oregon and Washington governors to declare a state of emergency.

The U.S. Highbush Blueberry Council released a podcast June 29 featuring several Northwest growers, who said it will take a while to determine all the damage, which happened at a critical time at the start of peak season.

In its weekly Fresh Crop Report, Markon Cooperative BB #:123315 warns customers that blueberry prices are on the rise.

“The Pacific Northwest season is starting, but excessive heat in the growing region has stunted growth and affected quality,” the report says. “Overripe berries and softness are issues. Market relief is expected in August when the new crop Mexican harvest ramps up.”

The late-June heat wave was so intense that grocery stores in Washington and Oregon were forced to pull perishables from shelves because they couldn’t keep them cool.

According to weather.com, at least 25 locations in the western U.S. and 34 in western Canada have tied or set all-time record high temperatures during the heat wave.

While blueberries and other berries will see damage and volume drops from the heat, cherry growers seem to have the problem more under control.

In late June James Michael, Vice President of Marketing, North America for Northwest Cherry Growers BB #:162657 and the Washington State Fruit Commission BB #:162666, said the high temperatures will have some affect, especially on outer edges of trees, but growers have ways of dealing with heat, such as sprinklers and netting.

This year’s Northwest cherry crop is projected to reach 22.4 million 20-pound cartons, according to Northwest Cherry Growers, which would be up 17 percent over last year’s 19.8 million cartons.