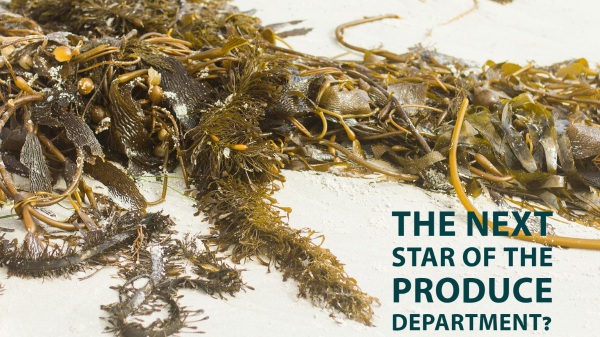 Like everyone, I suppose, who has ever strolled along a beach on the California coast, I have been awed by the specimens of giant sea kelp that have washed up.

They exert an uncanny fascination. It’s like coming across the corpse of an extraterrestrial. But appetizing they are not.

Now, however, we have to consider the possibility that kelp, along with other sea vegetables, is about to enter the mainstream of the eating world—or at any rate to become the latest food fad. Writing for Forbes, Daphne Ewing-Chow gives several reasons why sea vegetables could be part of the future of produce. They include:

Higher nutritional value. “Ounce for ounce, seaweed contains more nutrients than any food on the planet,” writes Ewing-Chow. It is rich in protein, iodine, fiber, and vitamins A, B, C, and E.

They are delicious, being like green vegetables “but more savory in flavor.” For example, she writes. “sea asparagus has been described as a saltier version of land-based asparagus.”

If you’re a sushi fan, you’ve no doubt eaten nori, a dry, black, paper-like substance that is used to wrap rolls. Spirulina, which is in its most recognizable form is green pond scum, has long been a favorite supplement for health-food enthusiasts. Even kelp, which looks so intimidating on California beaches, is increasingly added as flavoring to soups and stews.

Products like these have one big advantage: as befits their origins, they are salty. And as you can remember from the last time you bit into a potato chip, for the American snack consumer, salty is good. (Whether Americans need additional sodium in their diets is quite another question.)

But most sea vegetable products available on the American market, like the ones I’ve mentioned above, are dried. What about fresh sea vegetables?

Availability could well be a problem: I don’t find a single fresh sea vegetable on the Whole Foods site.

Frieda’s, long a promoter of the exotic, doesn’t have any either.

Even Rising Tide Sea Vegetables, which harvests kelp and other forms of seaweed on California’s Mendocino County coast, only features dried products.

MarxFoods will sell you micro sea beans, except they’re out of stock as of this writing.

On the other hand, Olokai in Hawaii will ship you some fresh sea asparagus at a price of $23 per pound. Or you can get it from Direct Food at $16 a pound.

That’s for the consumer, of course. Wholesale is quite another matter.

Fresh sea vegetables still seem to be far not only from the mainstream, but even from the more culinarily adventurous consumer. But far stranger things have become regular features of American cuisine: in the sixties and seventies, people routinely laughed at the Japanese for eating raw fish. Today’s culinary panoply includes truck stop sushi.

Why not consider this easy quiz?

I personally would put my X next to “almost certainly will . . . ”

Fresh sea vegetables—a trend to keep an eye on, but not necessarily to jump into right now.