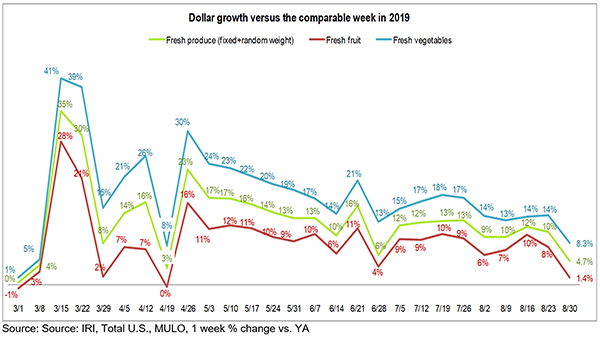 The last full week of August saw the smallest increases since the start of the pandemic across virtually all departments. Prior months had shown weak final week of the month sales and, in this case, the results were further influenced by a much earlier Labor Day in 2019 that fell on September 2. That means the sales results of the week ending August 30th 2020 went up against the 2019 Labor Day sales.

Labor Day has always been a massive holiday week for grocery — making it a much harder holiday to beat than ones that had more of a split retail versus foodservice nature in typical years, such as Mother’s Day. Additionally, sales were negatively affected by more extreme weather events, impacting large parts of Louisiana and east Texas.

The net effect for fresh produce was a much smaller gain than those seen since the last week of June. For the week of August 30, fresh fruit and vegetable sales increased 4.7% over 2019. Frozen fruits and vegetables had a much higher percentage increase, at +17.7% but is the smallest of the three temperature zones. Year-to-date through August 30, fresh produce department sales are up 10.9% over the same time period in 2019. Frozen fruit and vegetables increased the most, up 26.8% year-to-date.

“At first sight these results look surprisingly low after settling into a comfortable 10 percentage points above last year’s levels for weeks on end,” said Joe Watson, VP of Membership and Engagement for the Produce Marketing Association (PMA). “However, when realizing this week is going up against the Labor Day performance in 2019, the near 5% gain is actually quite remarkable. It indicates that today’s everyday fresh produce demand actually lies higher than last year’s holiday demand, particularly on the vegetable side.”

Fresh produce generated $1.26 billion in sales the week ending August 30 — an additional $56 million in fresh produce sales over the prior year. This is far below the pandemic average for additional dollars, at $179 million per week due to going up against the 2019 Labor Day performance. Vegetables grew 8.3% versus year ago and fruit dropped down to +1.4% during the week of August 30.

Fresh produce commanded an 81.4% share of total fruit and vegetable sales across all three temperature zones during the week ending August 30 — unchanged versus the week prior. “Frozen fruit and vegetables have gained share amid the pandemic despite still being down double digits in the average number of items per store on the fruit side,” said Jonna Parker, Team Lead Fresh with IRI. “Consumers are giving frozen fruits and vegetables credit for shelf life and that is an important lesson for us on the fresh side.”

The week of August 30th experienced a 0.5% volume increase — 4.2 percentage points less than dollar gains. A look at category-level price information shows continued areas of high inflation and high deflation that, to an extent, are counterbalancing each other to result in fairly mild inflation.

Both fruit and vegetables saw dollar sales gains track ahead of volume gains. Vegetable volume growth dropped to its lowest level, at +3.0% during the week of August 30th and fruit volume sales dropped below last year’s levels, at -1.2%.

“Berries claimed the number one slot in the Top 10 absolute dollar gains for the third week in a row with an additional $18 million versus year ago,” said Watson. “But many others changed position, came into the top 10 or dropped out of the top 10. Tangerines were the fastest riser, jumping into sixth place with gains of $3.4 million.”

Many more fruits and vegetables had double-digit inflation versus deflation during the week of August 30. Corn led the list of items with inflation, at +22.4% versus year ago, followed by peaches and limes.

“In fruit, berries remained dominant in sales as one of the few in double-digit increases over year ago,” said Parker. “The impact of going up against Labor Day 2019 can be seen in items, such as melons, which resulted in down results in both dollars and volume. But I fully expect to see that turn around in next week’s report when we will see the effects of the holiday week this year.”

During the week of August 30, double-digit gains in the top 10 sellers were reserved for berries, tangerines and cherries.

The top 10 in sales on the vegetable side included five items that had double digit increases versus year ago. While much better than fruit, this is down from the typical seven or eight items featuring double-digit growth — reflecting the impact of going up against the 2019 holiday performance. “Much like melons on the fruit side, we see the holiday effect here in items like corn,” said Watson. “Corn is big for the last official grilling holiday of the season and everyday demand this year just could not tip holiday demand in 2019, resulting in dollars being off 13.6%. Mushrooms continued their pandemic strength with another double-digit increase, along with lettuce, tomatoes, peppers and cucumbers.”

More than three-quarters, 78.3%, of total lettuce sales was made up by fresh-cut (packaged) salad. Dollar gains for fresh cut salad remained in double digits, at +11.1% versus year ago levels. Volume sales increased 7.3% and units (transactions) grew 3.1%.

The week of August 30 experienced a dip across produce offerings with the exception of frozen fruit that continued to sit well above +30% versus year ago levels. Shelf-stable fruit sales dipped below 2019 levels, at -1.0%, and canned vegetables fell into single digits, just like fresh fruits and vegetables.

Floral sales remained well above 2019 levels despite going up against the holiday weekend last year. Gains were above those of produce. With the exception of the week of May 17, sales have been in positive territory since early May.

The downward effect of going up against last year’s holiday performance effected all departments. For instance, the meat department had a 23-week streak of being in double-digit gains, and came in at +2.0% over year ago this week. Total deli, which encompasses non-UPC, random-weight deli cheese, meat and prepared foods, remained pressured, due to deli-prepared sales’ continued struggles.

Next week’s report will the last in the weekly series IRI, PMA and 210 Analytics have produced since the week of March 15, after which the report series will continue on a monthly basis. Next week will also show the results of the 2020 Labor Day weekend sales, which should be impressive going up against an everyday week in 2019.

Additionally, everyday produce demand remains strong. Restaurant transactions continue to recover but remain below last year’s levels. With case count for new COVID-19 cases down across many states, consumer concern is starting to moderate a bit. And aided by the effect of virtual schooling, produce sales are likely to hold well above 2019 levels for many weeks to come.

We encourage you to contact Joe Watson, PMA’s Vice President of Membership and Engagement, at jwatson@pma.com with any questions or concerns. Please recognize the continued dedication of the entire grocery and produce supply chains, from farm to retailer, on keeping the produce supply flowing during these unprecedented times. #produce #joyoffresh #SupermarketSuperHeroes.