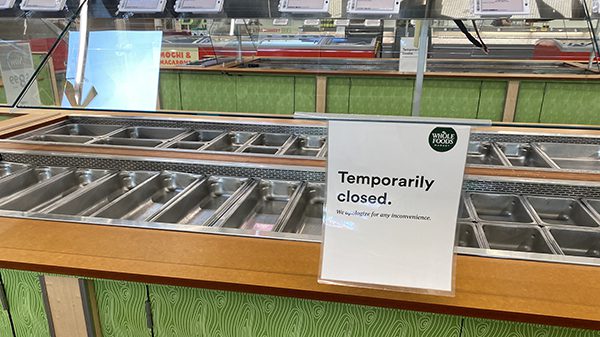 Salad bars aren’t the only things temporarily closed at Whole Foods as the company has turned six stores dark to facilitate growth in e-commerce.

When Amazon bought Whole Foods BB #:147784, I immediately thought Amazon would convert part of each of the 400+ Whole Foods physical locations to facilitate roll-out of online order and grocery pickup.

Perhaps they were being cautious because the market wasn’t ready for it. And now, the company is closing sales floor space and opening so-called “dark stores” for online order fulfillment.

The latest to go dark is a store in Chicago. Business Insider reports six of the company’s brick-and-mortar stores were shifted to a dark concept. Three were under construction and the company pivoted to online instead of opening sales floor, a move the company says is temporary.

The back-and-forth of Amazon Prime grocery and Amazon Fresh contraction and expansion over the past three years has been a puzzler for me. Amazon is an e-commerce company. They bought a grocery store. Why was this not a better marriage?

And now, amid arguably the biggest crisis for the American food supply chain, retailers find themselves behind the 8-ball trying to ramp up online grocery to meet staggering demand.

Imagine if Whole Food stores had been better positioned for online grocery fulfillment two years ago.

Imagine if Amazon’s massive network of e-commerce was better suited to fresh foods.

Actually, the more I think about it, this would have been a nightmare for mainstream retail in the U.S. Amazon would have sucked a huge portion of that hesitant online grocery shopper into the gooey, warm embrace of Prime and they wouldn’t have come back.

I’m one of an estimated 112 million Amazon Prime members in the U.S. I check Prime first for everything. I just bought catnip seeds and yoga pants on Amazon Prime (two separate orders, of course, because who cares when shipping is free with no minimum order?) and they’ll be here tomorrow.

It’s so easy, but we all know grocery is not yoga pants and catnip seeds, and traditional grocers have a leg up when it comes to fresh.

Now is the time to ensure every online shopper is happy with their order, and coming back for more.