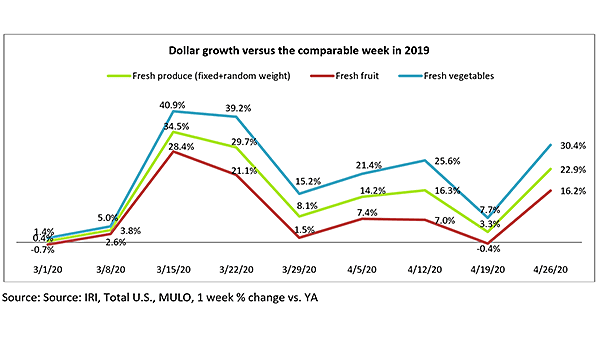 During the last full week of April, grocery shopping patterns remained vastly different. Since early March, food spending has been highly elevated, trips have been shifting away from the weekend to weekdays, baskets have become bigger as shoppers seek to minimize trips and prepare more meals at home, and online engagement continues to grow. 210 Analytics, IRI and PMA partnered to understand the effect for produce in dollars and volume throughout the pandemic.

Following a tough week that went up against the Easter 2019 sales bump, fresh produce gains jumped right back into the double-digits the final week of April. Fresh produce growth for the week of April 26 versus the comparable week in 2019 increased 22.9%. Fresh vegetables continued to easily outperform fruit, but the latter was back in the high teens and not all that different from gains seen in shelf-stable fruit that was up 28.2%. Meanwhile, consumer interest in all three fruit and vegetable offerings continued, with dollars split between fresh, frozen and shelf-stable. Frozen produce once more had the strongest gains, up 57.6%.

“Last week was a hard one to judge because of the Easter effect,” said Joe Watson, VP of Membership and Engagement for the Produce Marketing Association (PMA). “It is terrific to see that retail produce sales did very well this week. This is great momentum as we get ready for the summer fruits and vegetables to hit the market. With at least some states starting to reopen restaurants, albeit at limited capacity, foodservice orders may help strengthen the overall produce demand further in weeks to come.”

Fresh fruit and vegetables are roughly equal in size, but vegetables had been outgrowing fruit for more than a year and this pattern has been strengthening ever since the onset of coronavirus in the U.S. For the week ending April 26, fresh vegetable growth once more far exceeded that of fruit, at +30.4% versus +16.2%. Fresh vegetables have enjoyed double-digit growth for seven out of the latest eight weeks. Compared with the same week in 2019, fresh produce generated an additional $256 million in sales.

“These numbers very clearly show that higher everyday demand driven by in-home consumption is here to stay for the foreseeable future,” said Jonna Parker, Team Lead, Fresh for IRI. “As the market is settling in to its new realities, headwinds are starting to ease, though some lingering supply chain issues remain. Then there is an entirely new shopping dynamic that affects everything from the demand curve to having to find new ways to drive impulse.”

One shopper said, “Produce is looking pretty sad but I am sure this is due to the supply chain difficulties you encounter as well.”

Another said, “After all these weeks it is still difficult to see such a lack of produce, meats, center aisle items and I know it is not your fault. We need to open up this country so that the shortages do not get worse than they are now!”

One of the shifts in shopping has been a surge in online orders, many placed by first-time users. A late March survey by 210 Analytics showed that 32% of consumers had ordered groceries online in the past month, of whom 28% were first-time users. This translates into roughly 40 million new online households since the onset of coronavirus. The share of first-time users among consumers ages 65+ was much higher, at 42%. Among shoppers who ordered online in the past month, 42% believe they will continue to do so. This can dramatically change online grocery shopping, in terms of engagement among older demographics, who tend to order different items, represent smaller households, with very different underlying reasons for ordering online, being safety versus convenience. The COVID-19 surge in online ordering has also changed geographic engagement, shifting from the two coasts, large metropolitan areas and high-income zip codes to include shoppers in all areas of the country. Based on pre-pandemic shopping behavior we are likely going to see a combined online/offline shopping pattern, much like we saw among the pre-pandemic online shoppers.

One shopper noted on CCF, “This was my first time doing online shopping and it was a success!! I will definitely be doing it again!”

Another shopper noted, “All has been very good and a life saver. My husband had a bone marrow transplant recently, so we are high risk. Getting all of the groceries that we need has been beyond helpful and has reduced our stress level. We are regular shoppers, so knowing the store and fresh quality has made this transition a lot easier. I miss shopping in the store, but online is next best!”

It is also important to point out that percentage-wise, gains in fresh produce are bound to be lower than frozen and shelf-stable due to its share of total produce. For the week ending April 26, fresh produce made up the majority share of total store produce sales, at 79%. “This is the third week in a row that fresh produce has increased its share of the total fruit and vegetable dollars across the store,” said Parker. “Shares are not quite back to normal yet, but they have come a long way from the key panic buying weeks ending March 15 and 22, when the share of fresh was down to 70%. Consumers remained highly engaged with frozen and canned, but fresh is making a comeback.”

Additionally, distributors have been finding creative ways of going consumer-direct and some restaurants are now selling groceries. Those sales are not reflected in the IRI numbers and affect fresh produce sales disproportionally. 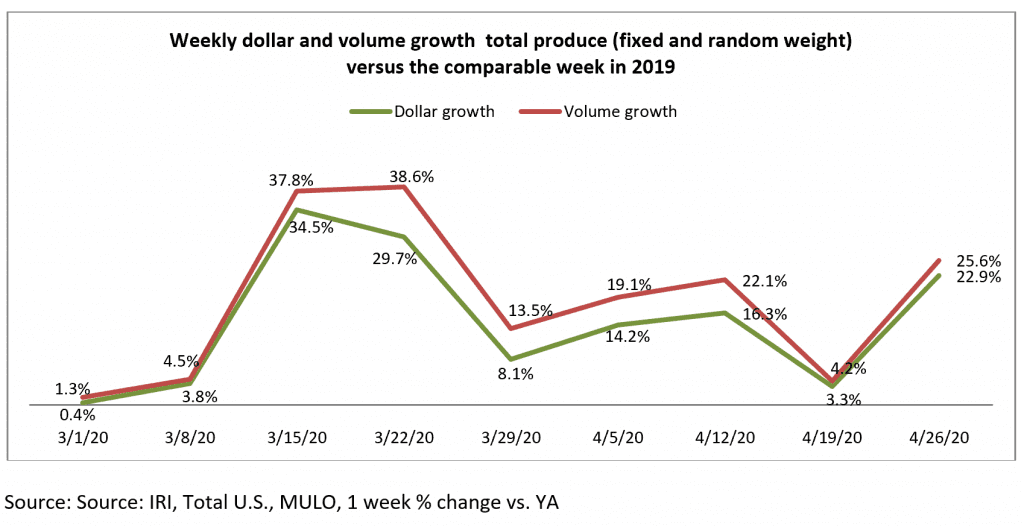 Both vegetables and fruit saw volume tracking ahead of dollars the week of April 26 versus the comparable week in 2019. The gap for vegetables was slightly bigger, at 3.6 percentage points.

The top three growth items in terms of absolute dollar gains over the same week in 2019 were berries (+$35 million), lettuce (+$29 million) and potatoes, +$24 million. However, at the category level, big differences continued to exist between dollars and volume, driven by deflationary pressure.

Going up against Easter 2019 resulted in flat sales for fresh fruit in last week’s report. Free of holiday effects, the week ending April 26 was strong for most fruits. The top 10 items in terms of dollar sales saw flat sales for two items (grapes and melons) but double-digit increases for seven. “This was an important week to see how much the elevated everyday demand pushed sales past the 2019 level,” said Parker. “Oranges continued their hot streak with another terrific 71% gain versus year ago. Highlighting nutritional benefits, particularly Vitamin C, in many other fruits and vegetables may benefit sales in weeks to come.”

All top 10 vegetable items in terms of dollar sales gained double-digits the week ending April 26, with increases ranging from +20.4% for lettuce to +50.8% for potatoes.

Lettuce was the top sales category and the top contributor to dollar growth in vegetables, adding $29 million in sales versus the comparable week in 2019. Potatoes were the second-highest driver of additional dollars, up more than $24 million, followed by tomatoes that added $21 million this week. Other impressive growth categories were peppers, onions and mushrooms.

Packaged salad sales had a very strong last week of April, with double-digit sales increases over the comparable week last year. This was the strongest sales week since March 22, ringing up an additional $20 million. 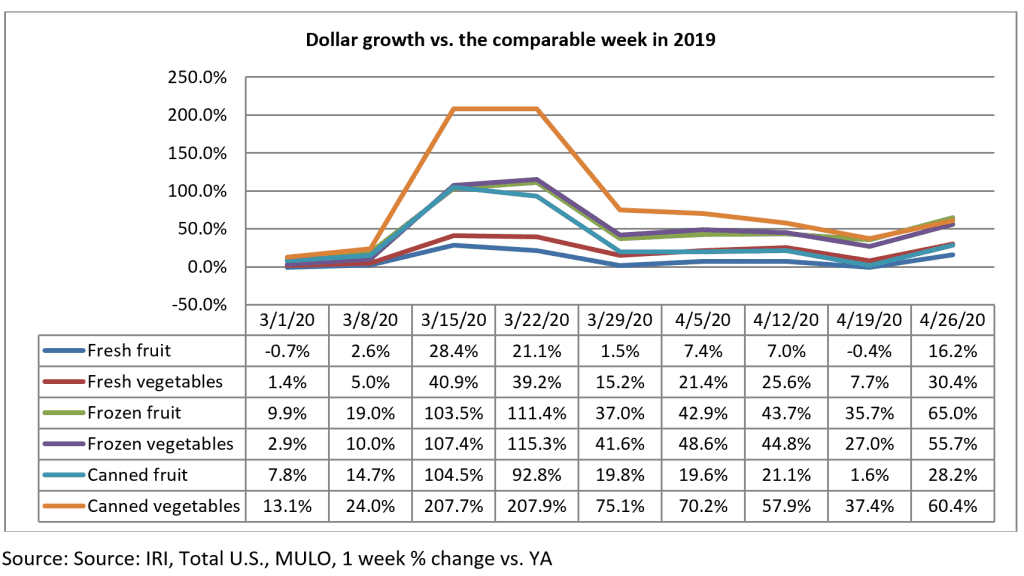 Food categories across the store did well the week of April 26. Edibles excluding fresh were up 31.4% and the total fresh perimeter was up 23.1% — much in line with total produce growth. Meat, once more, was the star of the perimeter, while sales in both the fresh bakery and deli departments continued to struggle. 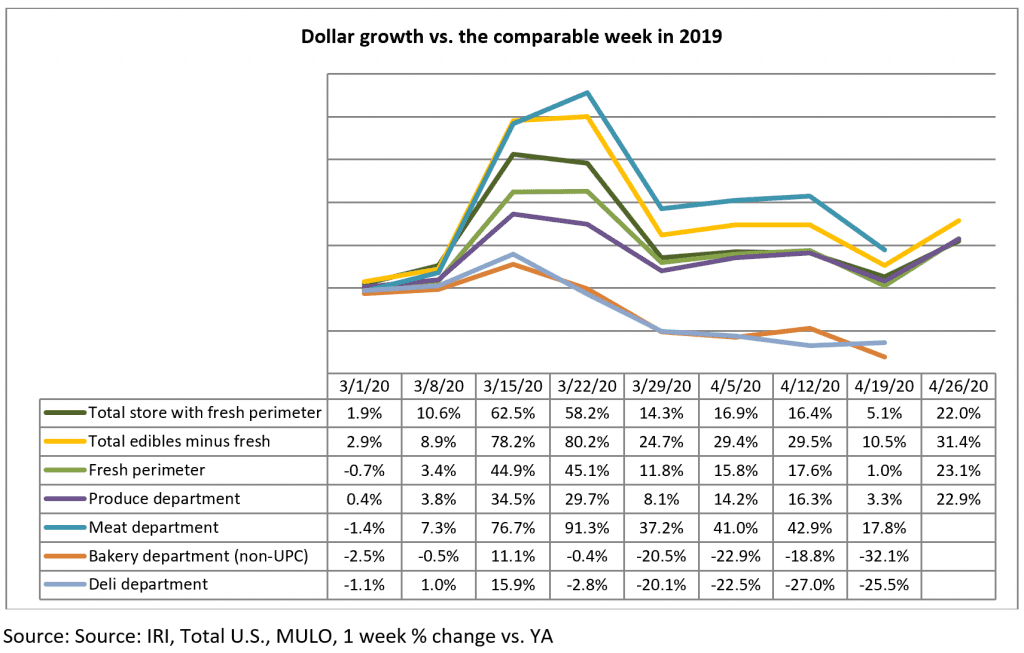 Going into May, several states have released detailed plans for re-opening in phases. In some, restaurants could reopen starting May 1, though often with social distancing and occupancy rate restrictions in place. This may result in a bump in produce demand over the severely diminished volumes seen these past few months.  The reopening of restaurants in these states may provide an indicator of consumers’ mental readiness and economic ability to re-engage with foodservice. The widely covered meat shortages in consumer media caused a renewed run on meat the first week of May, which likely caused a subsequent boost for produce sales. For the foreseeable future, it is likely that grocery retailing will continue to capture an above-average share of the food dollar.

Please recognize the continued dedication of the entire grocery and produce supply chains, from farm to retailer, on keeping the produce supply flowing during these unprecedented times. #produce #joyoffresh #SupermarketSuperHeroes. 210 Analytics and IRI will continue to provide weekly updates as sales trends develop, made possible by PMA.  We encourage you to contact Joe Watson, PMA’s Vice President of Membership and Engagement, at jwatson@pma.com with any questions or concerns.