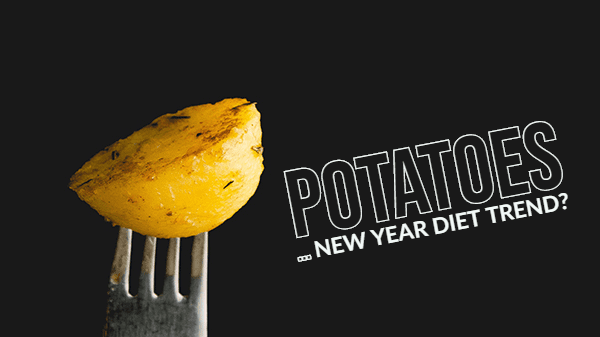 Thanksgiving and Christmas typically are the two biggest holidays for home cooking, which makes them the biggest sales periods for supermarkets, but I hope produce departments across the U.S. are bracing themselves for January 1.

I’ve done my fair share of holiday eating over the past six weeks or so, and let’s just say I’m about to have my last hurrah. I usually don’t do New Year’s Resolutions but I’m ready for some vegetables, and I think the rest of my family is ready to clean up their act, too.

(And if they’re not…well…I’m the one who does most of the meal planning and prep, so buckle up, kids! It’s going to be a great ride.)

Keto seems to be a pretty popular diet lately, but I really think January is prime time for Whole 30. The diet, co-founded by Melissa Hartwig, involves basically a one-month purge of all the things that aren’t great for you, from caffeine and alcohol to sugars and refined foods.

It’s also a perfect recipe for consumers to continue shopping and cooking for themselves, because it’s a nightmare to follow at a restaurant – at least, that’s what I hear from friends.

Phoenix-based Sprouts Farmers Market is getting ahead of consumers and has published a Whole 30-friendly shopping list, which mostly includes brands that have signed up for the Whole 30-approved certification, like Austin, TX-based CeCe’s Veggie Co. and Hint Water.

While I suspect the primary driver behind the list is brand-engagement for sponsors, I do note that the first suggestions are fruits and vegetables.

I don’t think I’m ready for the kind of commitment that Whole 30 requires, but I’m definitely up for bringing fruits and vegetables back to the center of my plate, and I don’t mean dipping more apples into fondue.  (Which I’ve done several times over the past few weeks because fondue is amazing and Opal apples in fondue cheese is probably the best thing I ate this holiday season.)

Retailers may be bracing for increasing demand for salads, juicing greens and cucumbers in the new year, but I have a few suggestions based on diet trends that may not be on your radar:

Celery – Last January’s celery juice craze hit at the same time as bad weather in growing regions, which put the market at an all-time high. The good news, at least so far, is that supply outpaces demand right now in California according to the latest market reports from ProAct and FreshPoint. FreshPoint notes that the holiday pull is slowing but I suspect Celery will enjoy a bump in demand as the new year starts.

Raspberries – Raspberries have been enjoying a boom over the past few years thanks to increased production, hardier varieties, larger pack sizes and the Keto diet, of all things. Raspberries are widely considered “keto-friendly” because of their low sugar content. Whole 30 doesn’t take as strong of a stance on whole fruit-based sugar, but does suggest participants monitor their fruit intake and recognize if they’re using it to feed cravings.

Potatoes – Did you hear the news? Potatoes are back on the menu for many dieters as WW (formerly called Weight Watchers) now officially recognizes them as a ZeroPoint food. That means consumers can eat all the potatoes they want (within reason, I’m sure). This is an argument I’ve seen for more than decade, as promotion organizations point toward what we add to the potato (butter, sour cream, bacon…) as the bad guy in potato dishes.