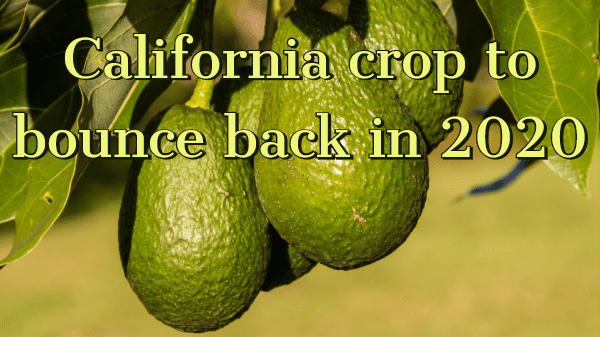 Jan DeLyser, vice president of marketing for the California Avocado Commission, BB #:145028 Irvine, said during PMA Fresh Summit that after recent crop meetings, the state’s pre-season estimate is 350 million pounds, which would be more than 60 percent larger than 2019’s 215 million pounds.

“We are looking forward to having promotable volume out of California this season,” she said, noting that avocados are alternate bearing.

DeLyser said the season officially starts November 1 and runs to October 31, but the California crop should become available in February with peak volume from March to September.

American consumers’ demand for avocados year-round has caused other countries to see the U.S. as a strong export market.

California crops are generally getting larger, but its share of the U.S. market is dropping.

“If we’re at 3 billion pounds in the U.S., and we’re 300 million, we’re 10 percent,” she said. “So, we can be much more targeted, to have that niche and deliver on it.”
DeLyser said the commission plans to have new promotions next season that will highlight California’s differentiation in the market.

The 2019 crop was the state’s smallest in a decade, and that brought high prices of $70-80 per carton last summer.

DeLyser said demand remained strong all season, but the smaller crop meant most of shipments stayed in the Western United States. A larger crop may allow retailers in the Midwest and East to run some promotions in 2020, she said.