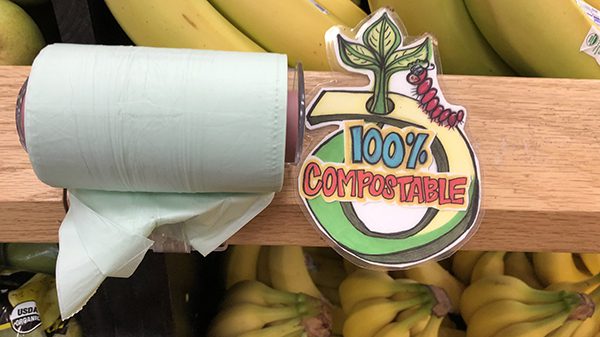 (Photo by Pamela Riemenschneider) Trader Joe’s replaced the usual plastic produce bags with a 100% compostable option at its store in Austin, TX.

Trader Joe’s, a haven for hipsters, walks a strange line with its shopper appeal because almost everything there, especially in produce, is packaged. I’ve often wondered how shoppers are reconciling themselves with this, and it appears that Trader Joe’s is addressing the issue.

I saw it myself the last time I stopped by an Austin, TX, location a couple of weeks ago. The bags for bulk produce are now 100% compostable, and I’m not sure if it was just me or if there really were more options for bulk produce.

I went again last week to a store in San Francisco, and sure enough – there was more bulk produce.

TJ’s sells everything by unit price, so switching away from packaged produce will be an interesting challenge. Will they switch entirely to compostable or more sustainable packaging options, or will it go to so-called “food in the nude,” which this New Zealand retailer is using as a catchy slogan for its “Project Naked” packaging-free fresh produce campaign.

A couple of retailers in Europe also have embraced packaging-free or low-packaging options in the produce department, including Marks & Spencer, Iceland, Nada in British Columbia, and Ekoplaza in the Netherlands.

But will consumers buy it?

Plastic-free is one of the latest buzz campaigns, with many consumers saying they want to explore these options, but is it really going to catch on when it comes to what makes it in a shopper’s cart?

One of the first packaging-free stores, Ingredients, opened in my own home town of Austin, and closed last year after five years in business.

A recent study by Ink Research in the U.K. delved in to consumers’ actual behaviors when it comes to sustainable packaging. Barry Noble, Managing Director at Ink Research, said in a blog post the group wanted to see if consumers would put their money where it matters.

“Shoppers all like to think they’re doing their bit and the media is full of surveys in which they claim they would change behavior – and pay more – to help the environment,” the post said. “But when given a choice will shoppers put their money where their mouth is and pay a premium for plastic-free packaging?”

Ink found while consumers were willing to pay more for plastic-free packaging, they placed higher value on locally-grown produce than plastic-free.

I’m still not sold on consumer commitment to 100% bulk produce. There are a lot of good reasons to package some items, and shippers and retailers are going to fight this trend tooth and nail.

To see how this plays out in the U.S., I’ll just keep stalking Trader Joe’s and report back.