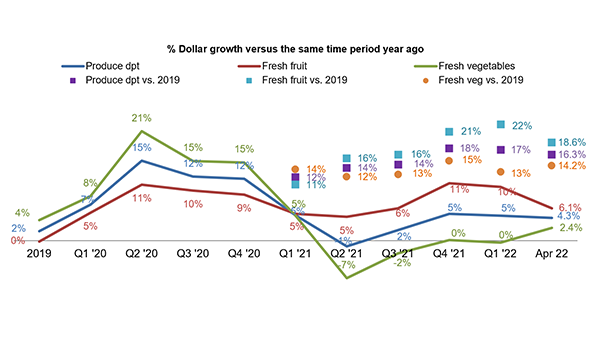 The shift in Easter/Passover dates from early- to mid-April moved holiday dollars from March to April, and as such, from the first to the second quarter. Easter is typically a big selling season for fresh produce and was the most disrupted of the major holidays in 2020 when most states were under shelter-in-place mandates.

In its Easter 2022 overview, the National Retail Federation found that consumer engagement was nearly back to pre-pandemic levels, with 80% celebrating. Average per person spending on all holiday-related purchases was $170 — a three-year low. Amid 40-year high inflation, consumers expected to spend more on food, but pulled back on spending in all other categories, including clothing, gifts and decorations.

Inflation not only took the headlines for the Easter holiday, but also dominated everyday spending.

“The April 2022 IRI survey of primary shoppers found that 90% of consumers believe food prices are somewhat or a lot higher than last year, of whom 96% are concerned about it,” shared Jonna Parker, Team Lead Fresh for IRI. “This includes 53% who are extremely concerned — the first time this number has moved past half of the population. This compares to 23% of consumers being extremely concerned over coronavirus in this same survey — meaning inflation has a far greater grip on the nation’s food spending than COVID-19 at this point in time.”

As a result of inflation, consumers are taking a wide variety of measures, according to the April IRI survey:

“These consumer money-saving measures combined with the continued volatility on the supply side are creating an environment of continued change and uncertainty,” said Joe Watson, VP, Retail, Foodservice & Wholesale for IFPA. To document the ever-changing nature of the marketplace, IRI, 210 Analytics and IFPA continue to team up to bring the latest trends and analysis relative to the produce department.

The price per unit across all foods and beverages in the IRI-measured multi-outlet stores, including supermarkets, club, mass, supercenter, drug and military, accelerated further to an increase of 10.7% in the four weeks ending April 24, 2022 (“April”) versus the same four weeks in 2021. Inflation was in the double digits in the center of the store as well as in perishables and compared to April 2019, prices across all foods and beverages were up 21.3%.

Fresh produce prices were also up from last year, at +8.7% level on a per unit basis and +10.1% on a per pound basis. The increases are predominantly driven by fruit, that had double-digit inflation once more in both the four-week and 52-week view.

“The average price per pound across fruits and vegetables was $1.89, unchanged from March,” said Watson. “The moderation in inflation on the vegetable side is finally leading to some price stability month-over-month, even if compared to year ago, we are still looking at robust increases. Based on input from retail produce professionals around the country, I remain positive going into the summer season. While elevated freight costs will likely persist, summer typically means more regional crops, which could lessen the burden of high transportation costs.”

The four April 2022 weeks brought $56.2 billion in total food and beverage sales, which was up from $54.3 billion in March — likely boosted by the later Easter/Passover timing. Compared with April 2021, dollars increased 8.0% and compared with pre-pandemic, April sales were up 22.0%. Inflation played a significant role with year-on-year unit sales down 2.4%. Perishables, including produce, seafood, meat, bakery and deli, had slightly above average growth, at +7.6%. Frozen foods had the highest increase versus pre-pandemic, at +29.5%.

April 2022 fresh produce sales reached $5.7 billion, surpassing the record set in 2021 by 4.3%. Month-over-month, April sales were slightly higher than March, likely because of the shift in Easter/Passover timing. However, looking beyond dollars that were highly affected by inflation shows unit and volume declines.

“There are many forces at play relative to the volume pressure,” said Watson. “Restaurant sales are ticking up a bit again, frozen and shelf-stable play a role, and there is the impact of supply chain disruption and out-of-stocks. Assortment has been affected by the labor, transportation and other supply chain issues. We can’t sell what we don’t have, so some of the unit and volume pressure may simply be our inability to meet demand. Fresh mushrooms are a good example of that.”

The changes in the timing of Easter/Passover prompted some ups and downs in the individual April weeks. As Easter fell on April 4th last year, sales were down year-on-year the first week of April.

However, sales during Easter week this year reached $1.6 billion, the biggest week of the four. That translated into a 13.4% increase over year ago and a 5.5% increase in volume. The non-holiday weeks generated about $1.4 billion, each, which is very similar to the weekly levels seen in the December through March weeks.

April was the first time vegetable sales were decidedly above year-ago levels since the second quarter of 2021.

Shelf-stable fruits and vegetables had double-digit inflation in April 2022 compared with April 2021. This resulted in above average dollar gains. Both frozen and shelf-stable are heavily impacted by supply chain disruptions. Both assortment and inventory levels have been down significantly over recent months.

Fresh produce pound sales trailed behind year ago levels all throughout 2021 and the first quarter of 2022. In April 2022, pound sales were down 5.2% year-on-year — its lowest level since the second quarter of 2021. Importantly, compared with 2019, the pre-pandemic normal, dollars remain 16.3% ahead (green triangles) but pound sales were a mere 0.7% higher (purple squares). When following the purple square trendline (pounds versus 2019), there is a continued month-to-month decrease from +10% in the first quarter of 2021 to +0.7% in April 2022.

“The volume pressure came from the fruit side,” explained Parker. “Fruit pound sales were down 1.6% versus the pre-pandemic normal of 2019. Vegetables, on the other hand, did still sell 3.2% more in pounds than they did in April 2019.”

“April, unsurprisingly, saw continued dominance in berries with sales more than double that of the second-largest seller, apples,” said Parker. “Pineapples were of course the Easter seasonal highlight, but grapes were an interesting story as the only other category besides berries to achieve volume gains.”

“Seven out of the top 10 vegetable sellers grew sales versus year ago,” said Watson. “Pound sales were down for most fresh vegetables, with a few exceptions, being potatoes, onions and cucumbers.”

“The top 10 in absolute dollar gains shows the overwhelming strength of berries in today’s marketplace as well as Easter dinner staples in potatoes and onions,” said Parker. “Berries have, by far, the lowest level of inflation, at +2.0% and yet added $70 million in new dollars. The inflation boost was clearest for limes, at 44%, resulting in $13 million in new dollars.”

In April, total perishables grew 7.6%, with above-average increases for bakery and refrigerated, which includes dairy. The highest gain versus the pre-pandemic normal was generated by meat, up 24.3% in April of 2022 versus April 2019. The departments still selling more units in April 2022 than they did in April 2019 are deli and produce.

The war in Ukraine, the renewed COVID lockdowns in China, record inflation, labor shortages and supply chain challenges will have a continued effect on food and frozen food sales in the months to come.

The next report, covering May, will be released in mid-June. In addition to the data provided here, the IFPA also now offers InSite – an online interactive data set covering both produce and floral performance as well as a look at the 2021 consumer sentiment surveys. Start your free trial today! See www.freshproduce.com/insite for more detail. We also encourage you to contact Joe Watson, IFPA’s VP, Retail, Foodservice and Wholesale, at jwatson@freshproduce.com with any questions or concerns. Please recognize the continued dedication of the entire grocery and produce supply chains, from farm to retailer. #produce #joyoffresh #SupermarketSuperHeroes.