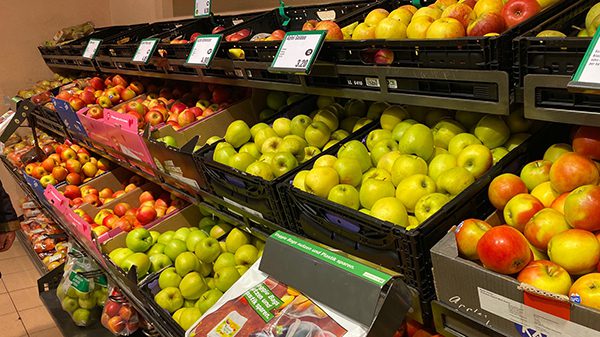 “Apples are sad here,” my expat friend told me, as we shopped at Migros in Zurich. I have to agree.

As I bite into a crisp, crunchy Cosmic Crisp apple for breakfast this morning, I am reminded that millions – no, billions – of people are not having the same “off-season” apple experience we do in the U.S.

I often encounter people turning up their nose at our lack of seasonality in some categories, saying maybe we shouldn’t have some fresh produce items on shelves 52 weeks a year and should learn to appreciate produce that is at its peak and turn to other foods in the off-season.

I respectfully disagree in some cases, and especially with apples.

I had the pleasure of store-checking in France, Germany, and Switzerland with some expat friends recently, and both of them bemoaned the state of apples in their produce departments.

And they have a point. At an otherwise beautiful Migros in Zurich, the apple category was…sad.

They had maybe five varieties available – a green Granny Smith lookalike that my Swiss expat friend says does not deliver the sour punch Americans are used to, two varieties I’m not familiar with but looked and felt suspiciously mealy, Kanzi, Jazz and Pink Lady.

What is it with Pink Lady’s stranglehold on the apple landscape in Europe? She’s the Queen of Branded Apples – sometimes the only branded apple – in most stores I’ve visited. In the U.S. she’s hardly royalty —   treated more like Cinderella under her variety name cripps pink.

Contrast that with the dozens of apples we have on our shelves, well into the spring and summer months, each with their own eating experience. Honeycrisp – the darling of our category for the past decade – is virtually nonexistent across the pond. Of course, it could be that European growers aren’t that interested in dealing with the Minnesota-bred treasure that has a reputation for tender flesh and finicky storage.

Speaking of storage…is it a lack of usage of controlled atmosphere storage that makes their apple categories so disappointing? I am all for cracking into a fresh pallet of apples deep into March that taste and appear no different than they did half a year prior.

U.S. consumers often don’t realize what goes into having great apples in the springtime. Controlled atmosphere has revolutionized the category – for better, in my opinion.

As for the dearth of springtime apple delights in Europe, there’s hope. After trials last year, Cosmic Crisp launched in Europe commercially on March 1.