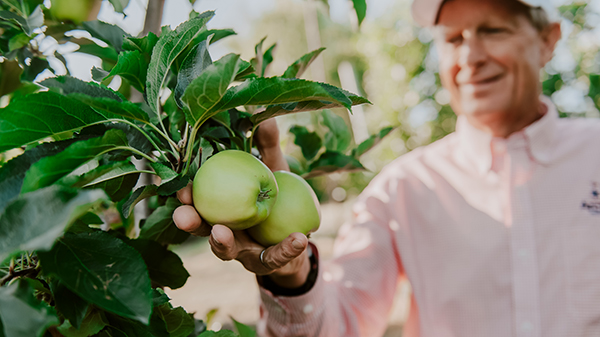 Would it surprise you to know that the world’s first bioengineered apple is more than 20 years old?

Summerland, BC-based Okanagan Specialty Fruit BB #:337660 is celebrating its 25th anniversary in 2021 with look back at a tech-loving apple grower with a vision to reduce waste and revitalize the apple category.

Click here to launch the story, or read below.

Arctic Apple founder Neal Carter’s family has deep roots in farming, having been in the business since 1908. Carter and his wife Louisa began growing apples in their own orchards in 1995.

But how does a guy from a century farming background decide to get into the business of bioengineering apples?
“It wasn’t a single moment where we decided to try bioengineering, but really a culmination of things,” he says.

Apple consumption was declining, an alarming trend for growers with trees in the ground.

“Less demand means lower prices,” he says. “The situation does not bode well towards long-term sustainability.”

Waste also is a problem.

“The number of apples wasted…post-harvest handling is a significant cause of apples being wasted due to various reasons – bag rub, bin rub, or finger bruising,” he says. “We’ve seen 30% culls due to finger bruising.”

Enter an apple grower with a love for technology.

“I’m a techie, the widget and gizmo guy,” Cater says. “My background is in engineering and I am always looking for the latest technology that can help us be more efficient.”

At the same time, the fresh-cut market was exploding in the U.S. and Canada.

“It became clear that we needed to reposition the apple business,” Carter says. “We needed to create demand much like we saw in the bagged fresh-cut lettuce and cut and peeled carrots.”

There’s not an easy solution without affecting the quality, flavor, and texture of the fruit.

Over coffee with a friend, Carter heard about Australian research to turn off the polyphenol oxidase (PPO) in other crops. PPO is responsible for the enzyme that causes browning.

After looking into the research, Carter found that Canada had initiatives to match the research and development investments, along with other resources.

“Essentially, we were able to complete ground-breaking research for fifty cents on the dollar, so away we went,” he says.

Arctic Goldens were the first to reach the market, followed by Arctic Granny. Arctic Fuji is up for a Fall 2021 harvest.

They solve a lot of pain points, besides the non-browning feature popular with consumers.

They reduce grower level shrink like bag rub, finger rub, and finger bruising, and shrink in the harvest, handling, and grading process.

“Arctic apple slices have a longer shelf life than conventional sliced apples,” Carter says. “Less shrink at retail is something we are proud to say our product offers.”

“The slices have a flavor you have to taste to believe,” he says.

And for consumers, that’s a big hit. Pre-sliced apples taste like home-sliced.

The company has had some pretty lofty goals and targets, Carter says.

“We’ve delivered on a vast majority of them and have exceeded expectations in many ways,” he says.

Five years ago, the company hoped to have Arctic Fuji and Arctic Gala in the orchard. Arctic Fuji’s commercial launch is approaching, though Arctic Gala’s regulatory approval process has been slower than expected.

Okanagan Specialty Fruit also hoped to have 1,000 acres in production, and exceeded that target by 350 acres.

“We have established an excellent footprint,” he said. “From a marketing point of view, we have created a large-size group of supporters, and we’ve done well with our consumer outreach and education.”

Over the next five to ten years, Carter hopes to have greater market coverage for Arctic Apples, a broader range of products, like cider, in addition to sliced, diced, and dried products currently available.

“Our vision is to see Arctic apples differentiate themselves in the apple business,” he says.

But it’s not only apples on the horizon. The gene editing process used to produce Arctic Apples can be used for other tree fruits, like cherries.

It hasn’t been an easy road. Being the only so-called GMO apple brings its fair share of challenges.

“Being a trailblazer is a tough job,” Carter says “Through each phase we have had to learn, educate and develop. The science was hard. The regulatory was hard. Product development and commercialization were hard. For the first 10 years, nobody else was doing what we were doing.”

The company had to navigate through a frugal existence, much like other start-ups.

“We have covered a lot of ground and have successfully traveled an arduous path and expect more challenges ahead,” he says.

The rewards are many, however. The people involved have been passionate about the product and have seen it in action and believe in it, Carter says.

“It’s not just about me being passionate about the business,” he says. “When we share the project with a veteran in the produce industry and their takeaway is that ‘this is amazing!’ that is very satisfying.”

What’s next for Arctic apples? Arctic Gala is in the pipeline, and the much-awaited Arctic Honeycrisp is entering the regulatory process.

“Cherries will be the next fruit,” Carter says.

And if you ever wanted to have something in common with Arctic Apples, here’s your trivia:

“Interestingly, the technology behind the Moderna and Pfizer vaccines use mRNA technology – the same technology we use to silence the PPO gene in Arctic apples,” Carter says.