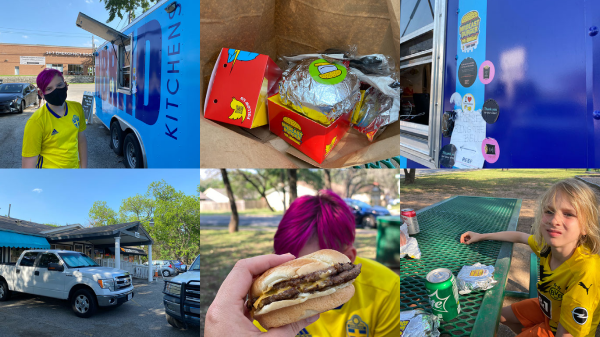 The burger was great, but a ghost kitchen doesn’t really make for a fun branded experience.

My sons are 7 and 12 and, like many kids their age are obsessed with the YouTuber MrBeast. They’re currently binge watching the back catalog. (I highly suggest the one where they buy everything in a Save A Lot store – relevant for our industry!)

MrBeast (AKA Jimmy Donaldson and his friends) has quite the social media empire, with 61.5 million subscribers on YouTube. He has a robust merchandise store and has now expanded into a burger chain.

The original concept was a free restaurant – something his videos became known for, and the reason my sons love him so much. He literally gives away money, video game consoles, houses, cars – you name it. We watched a video yesterday where he gave a Lamborghini to an Uber rider.

My sons didn’t know there was a MrBeast burger location in Austin until recently, and they’ve been begging to go ever since.

Of course we had to try it!

Here’s where the ghost kitchen comes in, and why I’m not sure this concept is right for most brands.

Ghost kitchens are essentially a commissary where many different restaurant products can be assembled by one crew. They’ve gained a lot of popularity, especially during the pandemic, because they’re essentially designed for delivery and carryout only.

The lower overhead allows a restaurant concept to expand rapidly. MrBeast Burger was created on December 19, 2020 and already has 600 locations. That’s outrageous in this industry.

To place an order, you either have to download the app, or use a third party delivery provider like DoorDash.

I recommend using third party delivery instead of picking up at the ghost kitchen. Here’s why.

If you’re looking for the feeling of a branded experience, being part of the magic that is MrBeast, you’re NOT getting it from the Anderson Mill location in Austin.

This morning, I asked my 12-year-old son Ike what his first impression of it was: “It was sketch.”

In 41-year-old mom that means “This was a sketchy, unmarked food truck in a Boost Mobile parking lot where this weird lady in ill-fitting cowboy boots was banging on the door demanding to buy a cell phone after the place had apparently closed.”

I’m not kidding. We pulled up and couldn’t figure out where to get the food. There was this mysterious blue trailer with no visible MrBeast branding at the end of the tiny parking lot. I figured that must be it. I ordered from the app for a 5:30 pickup. It was 5:31, so Ike and I went up to the window and waited.

There were two people inside, an older woman who appeared to be doing the cooking, and a younger woman handling the order tech. She asked for my name and looked around and didn’t have an order. She apologized because her tablet had crashed and she had to restart it. When she did, our order popped up.

She apologized again and said she’d have our order ready in about five minutes.

That gave Ike and I the opportunity to enjoy the sketchy splendor in the parking lot. Weird boots lady was blocking another person in, and had to move her truck. She clomped around in these boots falling off her feet and backed up this ancient Toyota pickup full of random buckets and construction stuff.

Then another gal rolled up looking for an order. She was a DoorDash driver, but couldn’t tell that this was the MrBeast location, either.

Sketchy boot lady came out of the Boost Mobile and tried to go back in and found the door locked. She proceeded to bang on the door loudly. Ike was really unnerved by it.

After about 10 minutes of waiting, our order was ready.

We took it to a nearby neighborhood park and had a picnic.

The burgers were excellent. I like the smashburger crispy thin patty style, and the flavor balance was awesome. My husband Brian got the Dream style burger (apparently named after another YouTuber?) which had a healthy dollop of avocado on top.

The fries were meh. They tasted like middle school French fries with some season salt on them. A real kitchen could be cranking out some fresh-cut potato fries, but this little trailer probably can’t handle them due to space issues.

The packaging was fun, but the overall experience was kind of a letdown. Ghost kitchens are great for expanding concepts, but not so great for an immersive experience.

I don’t think too many brands would survive in this environment. A little bite of MrBeast was enough to make my kids happy, but I don’t know if they’d want to go back.

Pamela Riemenschneider is the Retail Editor for Blue Book Services .