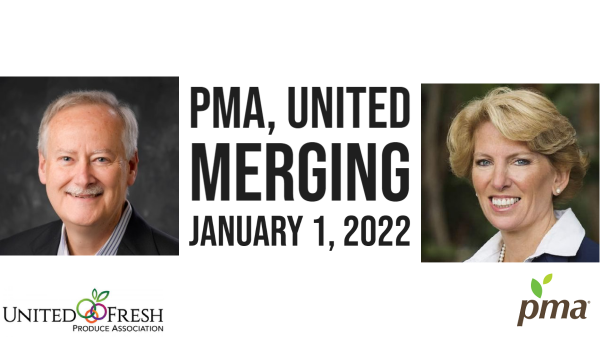 Ten years after the last negotiations, the Produce Marketing Association and United Fresh Produce Association are making it official.

It’ll be a long engagement for the organizations, as the merger is not expected to be official until January 1, 2022.

At a virtual press conference held on April 1, leaders from both organizations shared some insight into why they’re coming together now, after decades of speculation and nearly a decade after previous negotiations fell apart.

United Fresh CEO Tom Stenzel and PMA CEO Cathy Burns said the relationship has always been friendly, with both acknowledging the strengths of individual organizations. Recent collaborations in food safety and the Ethical Charter on Responsible Labor Practices pushed the organizations even closer together, Stenzel said.

“I think we were both in a safe place to start this conversation,” he said. “We didn’t know where it might go but the conversation was ‘Do you think we could be better together?’ And that was really the origin of it all.”

How long have talks been ongoing?

Burns and Stenzel said talks started among board members in the fall, about six months ago. The March 31 announcement was made shortly after staff was notified.

Where will the organization be located?

What staff changes are expected?

Leaders from both organizations were optimistic, saying no changes are happening right now.

“We both are pretty lean with our operations right now,” Stenzel said. “And what we’re looking to do is how do we combine these for greater member value. Again, this ain’t driven by cutting costs.”

Stenzel plans to remain in 2022 as co-CEO with Burns, and will transition away from the organization after that. He said he doesn’t have a firm plan for his post-United/PMA career but has considered consulting.

What will the combined organization be called?

Burns and Stenzel said there will be a thorough branding process for the new organization.

“For a skinny minute Tom and I tried to name the association and we said ‘Oh my gosh people smarter than us need to be involved in this,’” Burns said.

When will we expect to see the new vision?

The Fresh Summit stage is a good time and venue, Stenzel said, though there will be talks and interim steps announced throughout the summer.

“I’m looking forward to Fresh Summit in October,” Stenzel said. “I hope that we’re standing there on the stage together and we roll out the whole picture.”

And, what about membership and events?

There will be a thorough review of both organizations’ events to determine which ones bring the most value to members. Fresh Summit will remain.

A new membership dues structure will be created, Stenzel said.

“We are committed to having one big trade show, but we also do other events throughout the year as well,” he said. “We need to look at programs we’re currently doing…and blending the best of those, double down on some, and we may be sunsetting some. We just don’t know yet. That’s the work ahead of us.”

The bottom line: Better together

The theme of the press conference was the organizations are better together.

“I strongly believe we’re only going to get better as we bring these organizations together and be very diverse and well represented to take on those challenges,” Burns said.