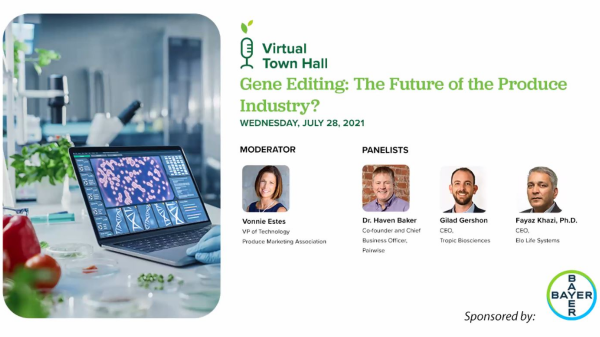 I spent part of my workday on Wednesday watching a rerun. It was of a Virtual Town Hall meeting entitled “Gene Editing: The Future of the Produce Industry?”, by the Produce Marketing Association BB #:153708, originally broadcast July 28.

PMA broadcast it again because of its popularity.

It answered one of the proverbial dumb questions that journalists, if no one else, should ask. In this case, what’s the difference between genetic engineering and gene editing?

A rigorous answer to this question would depend on your location because various nations define (and regulate) the two differently.

This is essentially the difference: if an organism has been modified by the insertion of foreign DNA, it’s genetically modified (a GMO, for short).

Gene editing, on the other hand, is modifying genes in a way that could be achieved by plant breeding, except gene editing takes much less time. (For details, see here).

USDA issued this statement in March 2018: “USDA does not regulate or have any plans to regulate plants that could otherwise have been developed through traditional breeding techniques as long as they are not plant pests or developed using plant pests. This includes a set of new techniques that are increasingly being used by plant breeders to produce new plant varieties that are indistinguishable from those developed through traditional breeding methods.”

As an example of gene editing, panelist Haven Baker, cofounder and chief business officer of Pairwise, points to one of his company’s current projects: the pitless cherry.

“With conventional breeding, it would take 150 years,” he remarks. But his company is three years into the project. He predicts that pitless cherries will be on the market by the end of the decade.

Seedless blackberries are further along: Baker estimates they will be available “in a couple of years.”

Another item: a watermelon that produces a natural zero-calorie sweetener, which panelist Fayaz Khazi, CEO of Bio Life Systems, says is “producing to scale” now.

One example is TR4 Fusarium wilt, which afflicts Cavendish bananas and, if not checked, can destroy the world banana industry as it is now known.

“We try to identify genes that affect Fusarium resistance, and try to fit them to consumer needs,” Khazi says.

The panel kept returning to one major theme: the importance of consumer wants in gene editing crops. “We try not to guess what the market needs,” stresses Khazi.

Indeed, the disconnect between real and perceived consumer needs is the biggest bottleneck, Khazi adds. Surprisingly, “the biology of the plant is never the bottleneck.”

Currently, no produce items are on the market in this country that are products of gene editing, the panelists noted, although Japan has introduced a tomato with a high GABA content that is available there.

Eventually, Khazi predicts, the two categories of GMO and gene editing will merge.

In any case, gene editing is part of the produce industry’s present and will become an increasingly important element of its future. Think of it as plant breeding on fast forward.