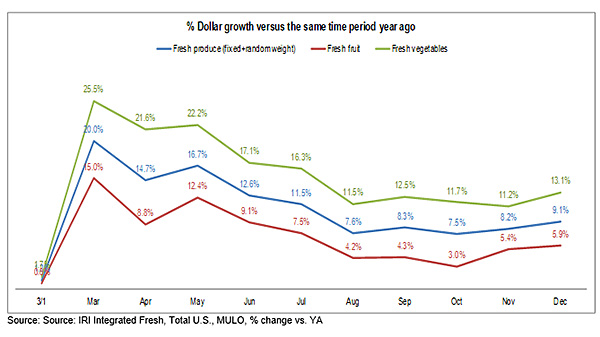 November and December sales were dominated by the holidays along with the consumers’ response to rapidly rising new COVID-19 cases across many states. Some states and cities enacted renewed shelter-in-place mandates which impacted grocery retailing in many ways. In December, consumers’ trip frequency fell below last year’s levels, much like it had in early April, while e-commerce transactions made a return to spring levels. Holiday celebrations were vastly different for Thanksgiving and the December holidays alike. There was less travel, gatherings were much smaller and many consumers shopped much earlier or online to avoid holiday crowds. But unlike the spring when similar conditions drove grocery sales double digits above year ago levels, December grocery spending was the most subdued it has been since the onset of the pandemic. December sales for all food-and-beverage-related items (total edibles) increased 8.1% versus 2019 levels, which was down from +9.7% in November and +8.5% in October.

“Produce at retail delivered its strongest month since July whereas total store had the weakest gains since the onset of the pandemic,” said Joe Watson, VP of Membership and Engagement for the Produce Marketing Association (PMA). “In March through May, we saw consumers fall back in more conservative eating patterns. But as COVID continues, health is becoming a bigger focus once more, particularly with an eye on immunity building. People continue to consume many more meals and snacks at home and with healthful choices top-of-mind, fresh produce delivered strong results.”

Looking at total fruit and vegetable dollars in fresh, shelf stable and frozen shows a majority share for fresh, at 76%. While this is below average against the entire 2019 calendar year (84%), this share moves up and down throughout the year. In November 2019, the fresh share of total dollars was 76.6% versus 76.1% in 2020.

“In December, fresh gained back a bit of the ground lost to shelf-stable in November,” said Jonna Parker, Team Lead for Fresh at IRI. “But either way, there seems to be a continued relationship between new COVID-19 cases, trip frequency and consumers’ focus on shelf-life. The slight share bump in December versus November may point to consumers looking to plus their winter holiday meals a bit more than the subdued, hunkering down which permeated Thanksgiving. Plus, we know fresh produce highlights warm-up meals like soups and stews. With health top of mind for January, fresh produce focusing on convenience and ease-to-table could be big opportunities in the first quarter of 2021.”

In September, volume sales briefly exceeded dollar sales on aggressive Labor Day pricing. But in the next three months, including December, dollar gains once more outpaced volume driven by vegetables.

“Retail fruit sales were perfectly in balance,” said Watson. “Both volume and dollars were up 5.9% in December versus year ago levels. Vegetables had an increase of 13.1% in dollars and 10.4% in volume. That marks the first time since September that vegetable volume growth jumped back into double digits.”

“The December Top 10 in absolute dollar gains reflects some familiar faces, led by berries, tomatoes and lettuce,” said Watson. “To provide some more insight into the enormous popularity of salad kits, we broke out loose lettuce from salad kits. The latter came in as the number two in terms of the highest absolute dollar gains in December, with a 21.4% increase in dollars. Oranges re-appeared into the top 10 and mushrooms and cucumbers are holding on strong as smaller, but mighty categories.”

“In fruit, berries remained dominant in sales but the strength of citrus is tremendous,” said Parker. “Citrus fruit was up 12.8% year-over-year in December, the highest of all the areas within fruit. Another area that is doing well is tropical fruit, with a gain of 6.6%, whereas mixed fruit was down 16.3%.”

“Whereas November was dominated by Thanksgiving classics such as potatoes, yams and celery, the December top 10 is very similar to what we have been seeing all year,” said Watson. “The dominance of potatoes, tomatoes and salad kits is astounding, with great strength in size and growth for lettuce, onions and peppers as well. Mushrooms have also been a pandemic powerhouse in retail, placing in the top 10 month after month despite being a much smaller seller.”

Fresh versus Frozen and Shelf-Stable Fruits and Vegetables

December gains in frozen fruit and vegetables were strong once more, with fruit falling slightly behind the November gains and vegetables slightly ahead. Sales of shelf-stable fruits continued to see the slow month-over-month erosion we have been documenting since July, but canned vegetables saw a bit of a rebound in both November and December.

A look across departments shows that only meat remained in double digits in December 2020, with the second strongest performance for fresh produce. The deli department remains slightly below year-ago levels driven by deli prepared whereas deli cheese and meat are strong performers. 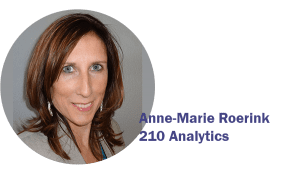 Everyday demand continues to drive strong vegetable sales and slightly weaker fruit sales — though still well ahead of last year’s levels. The first quarter outlook for 2021 is likely going to continue to be dominated by news and concern over the virus and the vaccine. The mid-December shopper survey by IRI found that consumers’ expected length of the health crisis had shortened slightly this month since the vaccine distribution began, however the majority of Americans are braced for the health crisis to last through most of next year.

Interest in getting the COVID-19 vaccine grew over the past month, with over half now planning to get it, and more eager to get it as soon as possible. Still, 22% say they will not get it and 23% are not sure yet. Increased interest spanned demographics, with the strongest gains among age 55+ and Hispanics. Shoppers with lower incomes, those without college degrees, and younger Americans showed increases versus last month, but remain less interested than their counterparts.

The next report, covering January, will be released in mid-February. We encourage you to contact Joe Watson, PMA’s Vice President of Membership and Engagement, at jwatson@pma.com with any questions or concerns. Please recognize the continued dedication of the entire grocery and produce supply chains, from farm to retailer, on keeping the produce supply flowing during these unprecedented times. #produce #joyoffresh #SupermarketSuperHeroes.