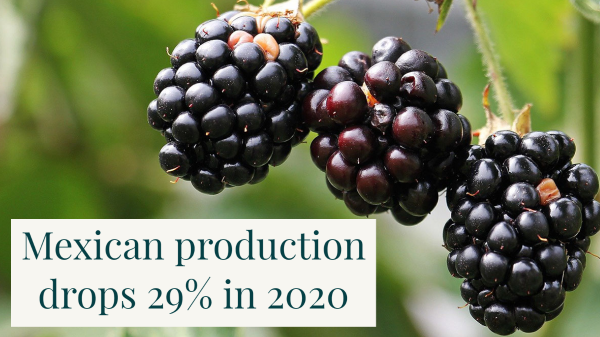 The Food, Agriculture, and Fisheries Information Service (SIAP) reports that blackberry production in Michoacán has plummeted by 29 percent, as reported by La Voz de Michoacan.

With just over 148,000 tons during the first ten months of the year, the production of this fruit in 2020 looks to be the lowest in the last five years and seems to be catching the economic slowdown that prevails in the state.

This compares to January to October 2019, where 208,046 tons of blackberries were shipped, reflecting a decrease of 28.9 percent.

Michoacán accounts for 93.5 percent of the total production of blackberries in the country and brings together nearly all the product destined for export, which has had its ups and downs due to harvest problems and border closures throughout the year due to the COVID-19 pandemic.

In addition to this problem, the president of the National Association of Berries (Aneberries), José Luis Bustamante Fernández has pointed out that the pandemic has been particularly detrimental to Mexican berries, not only in terms of production, but also in the channels of commercialization.

The health contingency impacted the issue of internal sales channels for at least four months, but it especially affected the logistics of routes and export processes for strawberries, raspberries, blueberries and blackberries, especially with the neighboring U.S.

The municipality of Los Reyes, with 69,663 tons, is the main producer in Michoacan, representing 40 percent of the blackberries that are produced, as well as 95 percent that are exported.