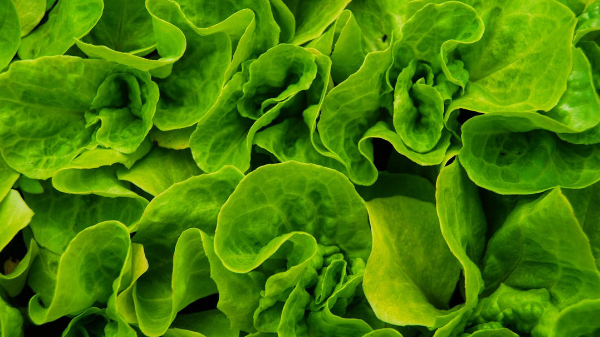 If life were simply a video game, I think we might be able to come to a consensus to hit the “restart” button and try 2020 over from the beginning.

We’re seeing everything from civil unrest to a global pandemic and of course now wildfires in California. While fires in California aren’t a surprise in themselves, the intensity with which they rage this year goes beyond the scope of normal.

As an industry, the impact can be felt in the heart of our lettuce supply where ash continually falls from the sky and gets into the plants themselves.

Blue Book has teamed with Agtools Inc., BB #:355102 the data analytic service for the produce industry, to look at a handful of crops and how they’re adjusting in the market during the pandemic.

While the ash itself can be washed away, the bigger concern we are faced with is cloud cover from the smoke. The lack of light during the day will most certainly impact the longevity of this crop, causing a potential supply gap before moving to Yuma, AZ, and the desert area.

You can see below that volume from central California is key to our national supply of lettuce, making up 63 percent of the total volume produced. 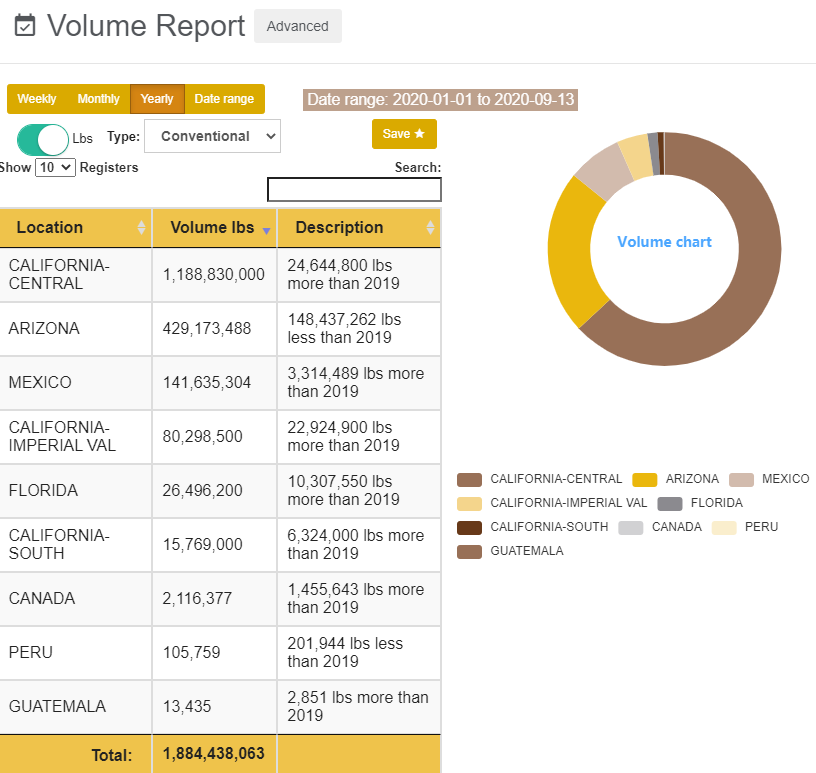 When considering what it means this time of year, the chart below shows that central California makes up 96 percent of our supply. 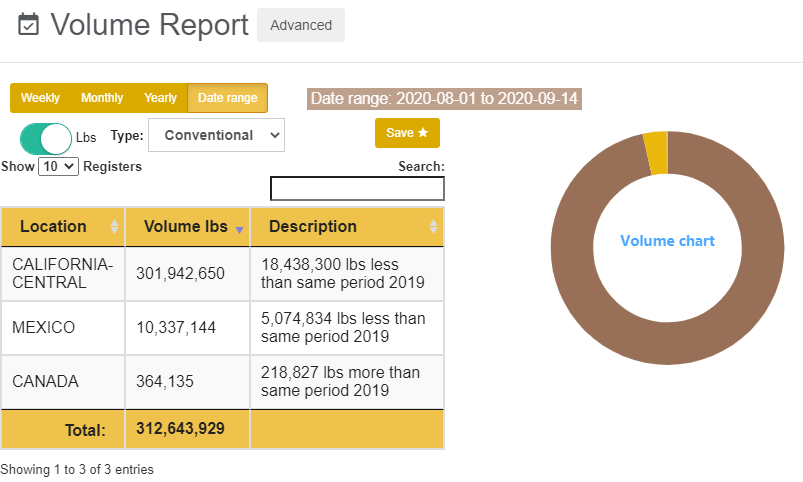 While supply remains a concern, pricing has remained steady considering everything that has happened this year.

In fact, when we compare this season to 2019 and 2018, the one thing that stands out is that inevitable spike in price between May and August. Prices in 2020 out of central California only exceeded the $20 F.O.B. mark for a couple weeks, while spending months over that mark in 2018 and 2019. 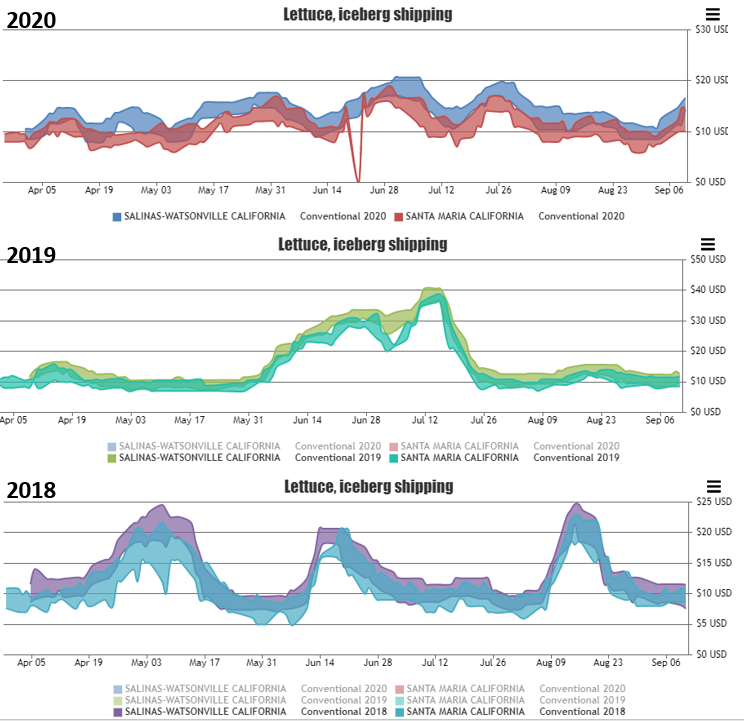 In a big brother/little brother way, it is interesting to see how lettuce from Santa Maria stays just below the Salinas market on a consistent basis.

Enough doom and gloom – let’s have a little fun with the data.

With the lack of sporting events in the first half of the pandemic, we decided to hold the Retail Pricing Battle of the Regions.

For fun, we seeded the regions and had them face-off against each other to see which region would own the belt with lower retail prices.

Our number 1 seed, the Southwest, destroyed the #6 seed Northeast, by posting multiple retail prices south of $0.50, while only exceeding the NE five times all year.

A major upset took place when the 2nd ranked Northwest faced off with the 5th ranked Midwest. While closer in proximity to the source, retail in the NW was consistently above $1 while the Midwest outperformed the Northwest in all but three weeks.

The closest battle of the regions took place when #3 South Central tangled with #4 Southeast. While the South Central region only exceeded the Southeast on a handful of occasions, the fact the Southeast outperformed them when we looked at lowest retail price, was enough to send them to the championship round.

When we compared the three winners, it came as no surprise that the Southwest was the most aggressive region when it comes to regional retail price, but surprisingly, the Midwest was second. Given the Vikings performance last Sunday, it’s nice for this Minnesota boy to see some good news for his region.

While that highlights my longing for live sports, a serious issue remains that is out of our control – upcoming weather. 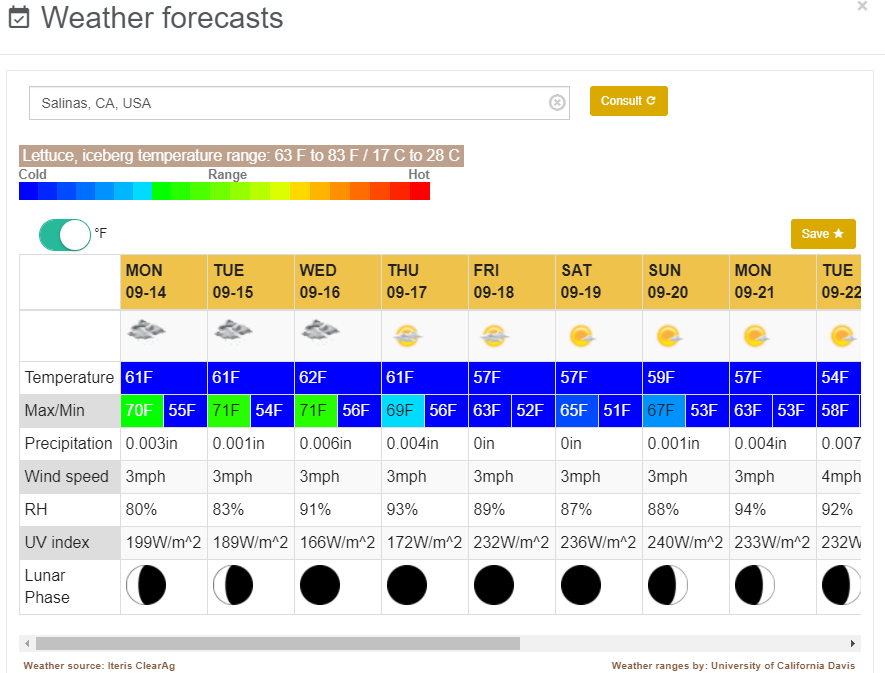 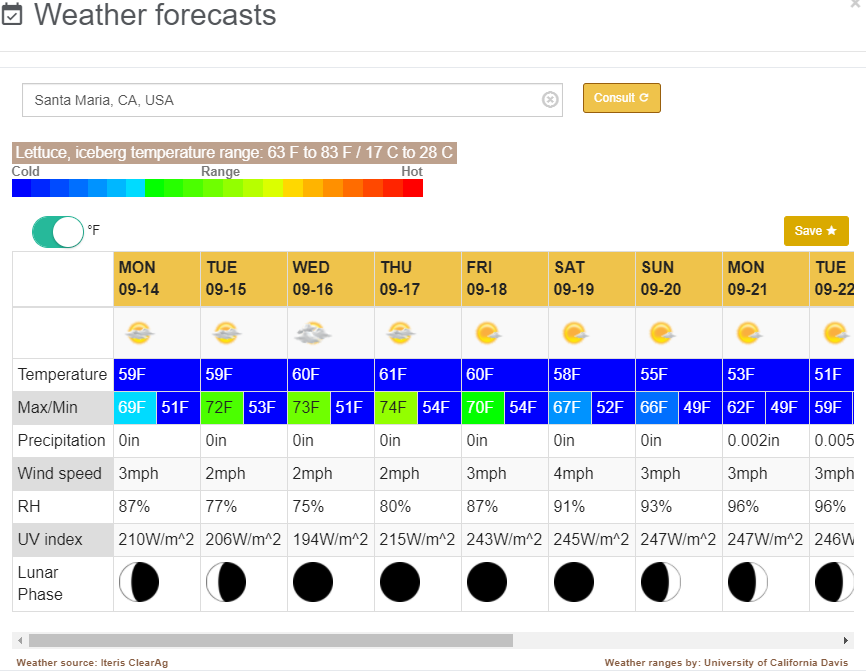 Continued cloud cover, coupled with the predicted weather pattern, could mean an early end to the Salinas growing season. Either way, it is something to keep an eye on as you plan supplies for the Fall.

Matt DeBoer is senior vice president of sales for Agtools Inc. He has more than 20 years of experience in the produce industry.