“Potential causes for the deflationary position of organic produce can be summarized in a couple of ways,” said Joe Watson, VP of Membership and Engagement for the Produce Marketing Association (PMA). “For years, organic production tried to keep up with demand as more consumers outside of the core organic customer were drawn to organic category for many reasons, including better availability, perceived safety, quality and price parody to conventional produce were key drivers. When the pandemic arrived in March, supply chains were disrupted as the foodservice channel was brought almost to a complete halt, right at a key seasonal production transition period. Demand for the top selling fresh produce items skyrocketed and consumers were not as discernible when it came to buying organic or conventional. Another consideration is that early in the pandemic, consumers tried to minimize trips and consolidated much of their purchases in their grocery channel, leading to an erosion of market share among specialty retail formats, which overindex for organic. But even with the increased demand as evidenced by high dollar and volume gains for organic produce, the sheer mass of total fresh produce dollar and volume gains pushed organic share down from their early in the year position.”

The produce department has seen unprecedented changes since the onset of coronavirus in early March. Initially, produce benefited from a surge in shoppers preparing for life in quarantine. This included the week of March 15 and March 22 which were two of the biggest weeks in the history of grocery retailing. During those two weeks, sales for fresh produce surged along with the rest of the store. At the same time, the share of fresh produce fell to as low as 70%, from its typical share of 84%, as shoppers were in a stock-up mindset and bought a disproportionate share of canned and frozen fruits and vegetables versus fresh. The panic buying weeks were followed by a period of fewer trips and bigger baskets and highly elevated fresh produce gains versus the same period in 2019, except when going against Easter 2019 sales during the week of April 19. Fresh produce sales gains in May continued to sit in the mid-to-high teens versus the 2019 baseline due to the many more at-home meal occasions and the share of fresh produce started to make its comeback. Throughout the pandemic, vegetable growth has outpaced gains in fruit sales.

Organic produce sales gains followed a very similar pattern to those of total produce throughout the pandemic. During the first four-week period ending March 22, total produce sales increased 18.0% versus the same period in 2019. Organic produce sales gains during this period were +21.5%. The difference narrowed a bit during the second four-week period and widened again in the third, the four weeks ending May 17, with organic produce up +20.3%. In fruit, organic sales initially far exceeded those of total fruit, but the gap disappeared over time with equal gains of +13.1% during the May sales period. In vegetables, organic fell behind total vegetable growth from the start and has trailed behind throughout the pandemic.

As organic sales make up less than 10% of total produce sales, the percentage increases for organic fruit and vegetables are somewhat higher. While the percentages tell one story, absolute dollar gains tell another. Year-to-date through May 17, the produce department has sold an additional $2.35 billion in fresh produce versus the same period in 2019. Organic produce has sold an additional $256.3 million during this same time period.

During the first four-week period ending March 22, organic produce sales were just shy of $528 million. Total produce department sales were just over $5.5 billion. This translates into a 9.6% share for organic produce during that first four-week period. As conventional benefitted from robust sales gains off the $5.5 billion base throughout the pandemic, the share of organic produce versus the total department has actually dropped somewhat despite higher-than-average growth percentages. During the most recent four week period ending May 17, the dollar share for organic produce is down to 9.0%. Year-to-date through May 17, the share stood at 9.4%.

Given its higher price per pound, organic produce makes up a smaller percentage of total produce volume than its dollar share. In volume, organic represents between 5% and 6% of pounds. Throughout the pandemic, organic has tracked ahead of the total in pound growth percentages. However, this is completely driven by fruit where gains are roughly double for organic versus the total in the March and April time periods. The gap narrowed significantly in the May time period. For vegetables, organic produce gains trail conventional in each.

While percentage gains for organic paced ahead of the total, the difference was not enough to maintain share. During the first four-week block, share stood at 5.8%, but this dropped to 5.1% during the May period. Year-to-date through May 17, total produce sold an additional $1.8 billion pounds of fruits and vegetables versus the same period in 2019. In contrast, organic sold an additional 127.0 million pounds during this same timeframe.Source: IRI, YTD and 4 weeks lbs sales growth vs. same weeks year ago

Organic fruit experienced stronger volume than dollar gains throughout the pandemic, which signals deflationary pressure. Moreover, the volume/dollar gap is growing wider, at 6.2 percentage points during the May time period.

Top Organic Sellers During the Pandemic

Berries were easily the top organic fruit seller during the pandemic, generating $217 million in sales, up +15.8% in dollars and 17.6% in pounds. Apples and bananas close out the top three.

Most top 10 selling fruits saw volume increasing more quickly than dollars, pointing to deflation. The volume/dollar gap was in the double digits for apples, pears, grapes and kiwis. Only two categories, avocados and tangerines had slightly higher dollar than volume gains. 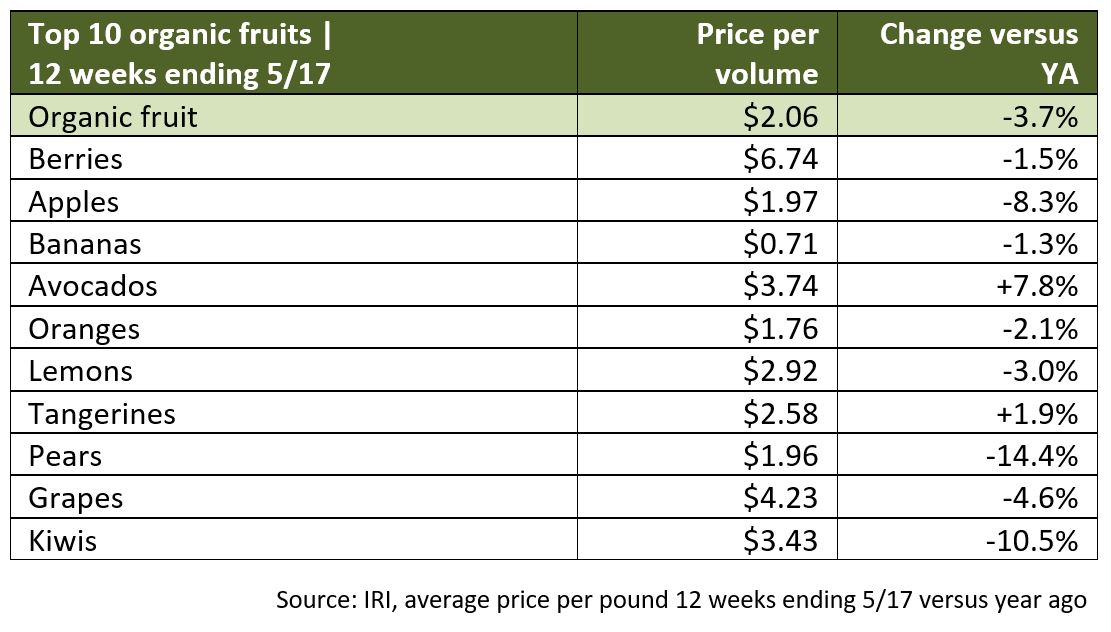 Despite double the gains during the first eight weeks of the pandemic and double-digit growth throughout, organic fruit lost share. During the March time block, organic sales as a percentage of total fruit sales stood at 7.5%. During the third four-week period, this share had dropped to 6.5%.

Like its fruit counterpart, organic vegetables experienced stronger volume than dollar gains throughout the pandemic. The gap was at its widest during the March time block. Year-to-date through May 17, volume gains outpaced dollar gains by 4.7 percentage points.

Top Organic Sellers During the Pandemic

Lettuce and salad is the top organic seller and more than three times bigger than the number two, carrots. Dollar and volume gains are up for all top 10 sellers. In some cases, volume gains significantly outpaced dollar growth, for instance for onions and celery. In others, dollars paced ahead of volume gains, such as in tomatoes, peppers and cucumbers. 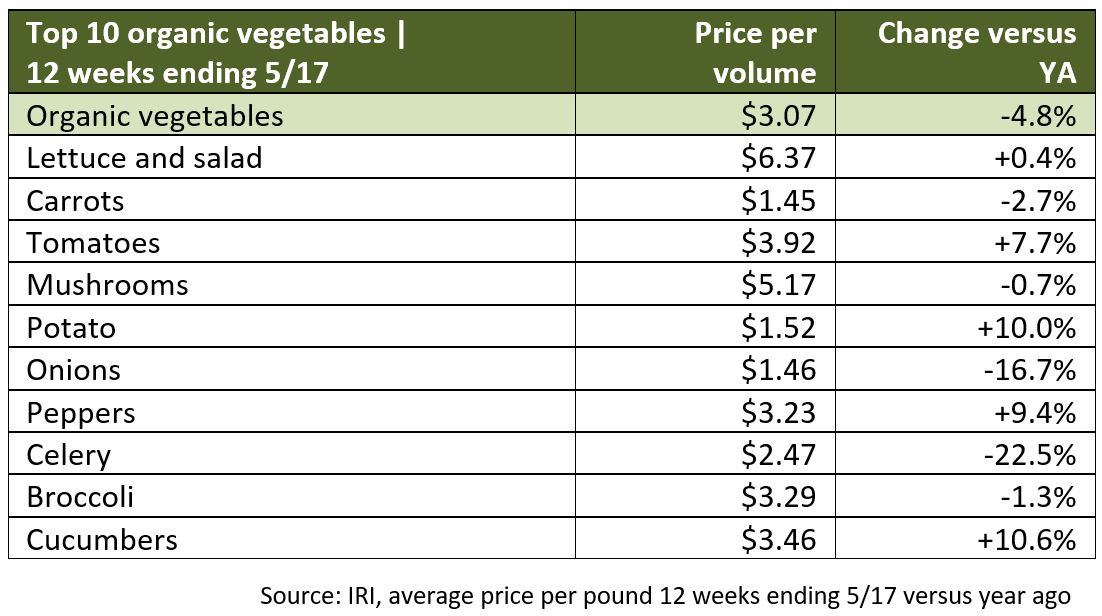 With dollar gains for organic vegetables tracking behind total vegetables throughout the pandemic, the share dropped from 11.1% during the first four weeks to 10.7% in the April time block. The dollar share recovered slightly in the third time block.

In the next four-week time block, total produce flipped from being deflationary to inflationary and dollar and volume gains continued to set comfortably above last year’s base line. Once organic produce numbers will be available for the June time block, PMA will provide an update on the organic side of the story to track whether sales shares have recovered along with the fresh produce comeback.

Please recognize the continued dedication of the entire grocery and produce supply chains, from farm to retailer, on keeping the produce supply flowing during these unprecedented times. #produce #joyoffresh #SupermarketSuperHeroes. We encourage you to contact Joe Watson, PMA’s Vice President of Membership and Engagement, at jwatson@pma.com with any questions or concerns.