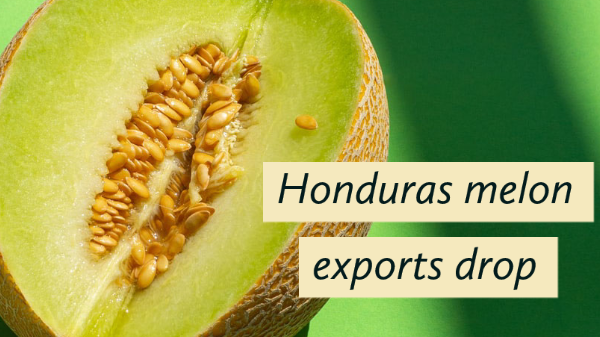 Honduran melon exports have been negatively affected by COVID-19.

Exports totaled $86.1 million during the first four months of this year, reflecting a decrease of 16.5 percent in comparison to the $103.1 million exported in the same period the previous year, as reported by La Prensa.

The biggest factor in the drop in external sales was a 12 percent reduction in volume and a decrease in orders, especially from the United States and the Netherlands, who together account for 87 percent of Honduras’ fruit exports.

Prices have also played a role, as prices have dropped to a two-year low, or 5 percent contraction.

Erick Martinez, director of the National Program for Agricultura Food Development (Pronagro) of the Ministry of Agriculture and Livestock (SAG) said, “The sanitary crisis produced by the COVID-19 pandemic has affected most of Honduras’ export crops due to the reduction of demand, caused by the closing of markets in destination countries, and to an increase in production costs.”

Second only to bananas, melons bring in an average of $400 million to Honduras’ economy each year. In 2019 melon exports increased by $26 million over the previous year due to better international prices and higher volumes shipped. That year melon exports reached more than $92 million.

The pace continued this year in key markets, such as the United States, where the first two months of the year reflected higher orders compared to the same months the previous year. The pandemic bought that to a halt in mid-March.