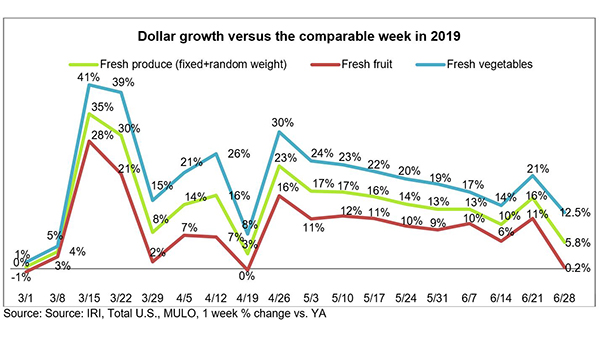 The week ending June 28 was the week in between Father’s Day and the Fourth of July, which means everyday demand alone was driving the sales numbers.

Food and beverage sales remained well above last year’s levels as consumers bought for the additional at-home meal occasions, particularly breakfast and lunch. At the same time, shoppers continued to mix and match fresh with center store items, including for produce, where gains for frozen and canned remained highly elevated. 210 Analytics, IRI and PMA partnered to understand how produce sales continue to develop throughout the pandemic as some states have reversed the relaxation of social distancing measures, including the reopening of bars and restaurants.

During the week ending June 28, elevated everyday drove gains of 5.8% for fresh produce — the lowest growth rate since April 19 when sales went up against the 2019 Easter holiday bump. Frozen and shelf-stable fruits and vegetables did continue to see double-digit gains, with particular strength for frozen, at +22.0%. Year-to-date, fresh produce sales are up 10.6% over the same time period in 2019. Frozen fruit and vegetables increased the most, up 33.6% year-to-date. This is in spite of limited assortment of frozen vegetables and fruit, down 13.1% in average items per store selling.

“Banking on elevated everyday demand alone, we expected this week to be down from the prior week,” said Joe Watson, VP of Membership and Engagement for the Produce Marketing Association (PMA). “However, the decline to single-digit gains shows that we need to continue to work hard to stay ahead of last year. Next week, we will have the benefit of the July 4th holiday, but after that, we have many regular weeks until Labor Day and going back to our basic merchandising principles to optimize planned and impulse purchases is key.”

Fresh produce generated $1.36 billion in sales the week ending June 28 — an additional $75 million in fresh produce sales. Vegetables, up 12.5% from the prior year, had a 12.3 percentage point lead over fruit. Fruit gained a mere 0.2% over last year, despite price increases. This was the lowest gain since the week of April 19 (Easter 2019) for both fruit and vegetables.

“The meager fruit gain is a bit worrisome,” said Jonna Parker, Team Lead, Fresh for IRI. “With the great assortment of summer fruits and all the added meal occasions, fruit should have good opportunity to gain year-over-year. At the same time, we know fruit is much more impulse driven versus vegetables and the lack of trips no doubt has a negative impact. That means the solution is optimizing planned fruit purchases by driving demand beyond the four walls of the store.”

Despite much lower gains for fresh versus frozen and canned, the produce department held steady at 83% of total fruit and vegetable sales across the store. At $1.36 billion in sales during the week of June 28, fresh produce is significantly larger than shelf stable ($155 million) and frozen fruits and vegetables ($124 million), which means growth percentages are likely to be much lower.

“It is good to see that despite the drop in sales gains, fresh produce maintained its share,” said Watson. “That means that shoppers were simply buying less overall, not just fresh produce. However, while climbing back up, foodservice sales continue to be down and this is retail’s time to help grower/shippers offset the loss in business on the restaurant side.”

After narrowing significantly during Father’s Day week, the volume/dollar gap jumped back up to reach its highest point since the onset of the pandemic. Across all fresh produce, dollar gains paced 4.2 percentage points ahead of volume gains.

The gap was driven by both vegetables and fruit. After tracking behind dollars the first two weeks of June, fruit volume once more outpaced fruit dollars the week ending June 21. In a pandemic first, fruit volume actually declined versus last year the week of June 28, down 2.5%. In vegetables, dollar gains also outpaced volume, at +12.5% versus +8.1%. At 4.4 percentage points, the gap reached its widest point since the onset of the pandemic.

In the ever-changing top 10 in terms of absolute dollar gains, tomatoes took over as the new leader from berries during the week of June 28 versus year ago. Berries dropped to third, whereas lettuce remained in second place. “This week we are seeing a big reshuffle in the top 10, both new items and a completely different order,” said Watson. “Cherries, the number one just a few weeks ago, dropped out of the top 10 altogether, as did melons that did well just last week for the Father’s Day holiday. Newcomers are cucumber and lemons, whereas oranges continued its unbelievable sales streak, up 51.8% the week of June 28. Perhaps very telling is the fact that only three out of the 10 items are fruit.”

Dollar gains, however, do not tell the full story. Supply and demand continued to be out of balance for some categories, though significantly fewer than last week. Ample supply is driving higher volume than dollar gains for items such as avocados, celery and Brussels sprouts. On the other hand, dollar gains are far outpacing volume for items such as corn, cherries and potatoes. “Corn on price per volume basis is up 44.2% versus the same week last year,” said Watson. “Typically corn is a great impulse item during grilling season and can become the basket anchor for complementary purchases in meat and other departments. However, in the current corn market this is hard to accomplish and one area where shoppers will switch to frozen and canned in response to pricing.”

“The weak fruit gains relate back to declines in several key summer categories, including melons, cherries, grapes and peaches,” said Parker. “Only the orange category is left with high double-digit gains, with others in low or mid single digits. I think there is a big lesson in the strength of oranges since the onset of the pandemic and that is nutritional benefits. Consumers equate oranges with vitamin C and, in turn, equate vitamin C with building the immune system. Many fruits, and vegetables, have strong nutritional benefits and highlighting those more clearly can be a big win for fruit during the summer weeks.”

Whereas the week prior, five out of the top 10 items saw double-digit dollar gains, only oranges achieved that this week. Instead, three categories, melons, cherries and grapes were down by double-digits versus the same week year ago.

In contrast to fruit, all top 10 vegetables increased in dollar sales versus year ago and many did so with double-digit gains. Lettuce was the top sales category at nearly double the sales of tomatoes and potatoes followed in third. “The strength in the overall vegetable number comes from high consumer engagement across the board versus just a handful of big sellers,” said Parker. “These are all cooking and snacking basics that show consumers are still preparing breakfast, lunch and dinner at home at greater rates than they were pre-pandemic. With carrots and broccoli sharing the number nine slot, squash made it into the top 10 this week — a great example of how the summer harvest can help boost department sales.”

Fresh cut salad continued to be a strong performer over the week ending June 28, but did drop back to single digit gains. Dollar gains were 8.2% over the same week year ago versus volume gains of 5.8%.

Frozen fruit and vegetables had another double-digit gains performance during the week ending June 28 versus year ago, and paced well ahead of canned items. The continued strength of frozen fruits and vegetables is remarkable, underscoring that frozen served as a means to stock up on items in March during the panic buying weeks, but are also being used and replenished at high rates. While growth rates for frozen and canned have consistently exceeded those of fresh, the latter’s size drove much higher absolute dollar gains every week.

Floral sales had a strong Father’s Day week and kept the momentum going into the last week of June. Dollar sales were up 3.4% versus the same week year ago.

The fresh perimeter departments had a strong week during Father’s Day, but center store gains once more topped those in fresh the week of June 28. Total edibles increased 13.1% and the fresh perimeter increased 8.2%. Both meat and seafood had higher than average gains, but the single-digit performance in produce along with down or flat sales in bakery and deli pulled down the perimeter average. 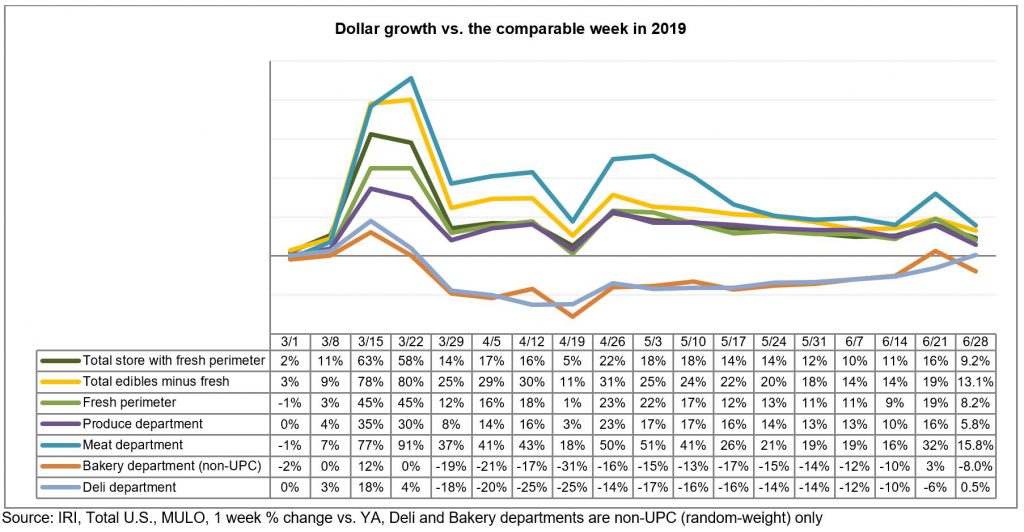 Next week’s report covers Independence Day, which is traditionally a strong produce holiday, driven by get-togethers and cookouts. Based on the results of the spring and summer holidays thus far, July 4th sales will likely be strong as more than half of shoppers expected to celebrate the holiday differently, with less travel and smaller, backyard celebrations.

Engagement with foodservice continues to be in flux, particularly as the past few weeks have seen spikes in COVID-19 cases and hospitalizations in some regions that had previously relaxed restrictions. Florida, Texas and California all rolled back some of the reopening decisions, which is likely to impact business activities, restaurant engagement and shopper behaviors in those regions. Between the continued impact of COVID-19 and significant economic pressure, the retail demand for produce will continue to track well above 2019 levels for the foreseeable future. One of the biggest opportunities for the produce supply chain lies with helping consumers with meal planning. IRI’s weekly survey found that consumers, who were initially taking to preparing more scratch meals, are running out of meal ideas. Pre-pandemic, it was exactly this meal fatigue that drove consumers to eat out.