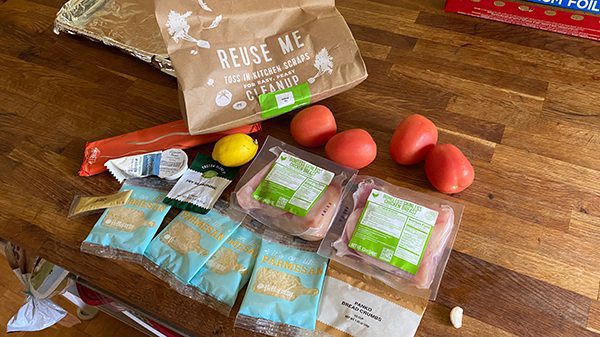 Unlike my previous experiences, everything arrived in good condition.

I didn’t turn to HelloFresh because I wanted to save money, but I still did a cost comparison when I was done – mostly because I felt ripped off.

I, like many other Americans, am so over the quarantine kitchen lifestyle. Baking sourdough and coming up with creative ways to use fresh produce was fun for the first month. Now that we’re rounding the corner into month five, I’m at the “cry for help” stage.

While retail executives like Kroger’s Rodney McMullen predict at-home cooking is here to stay, I’m frustrated and exhausted with the day in and day out of meal prep.

I just wanted someone to take the thinking away from me, but also not feed my family burgers, fried chicken, or pizza – their usual choices for takeout.

So, meal kits it is.

I went with HelloFresh because they seemed to weather tumultuous market over the past four years, still innovating and growing. Over the past few months the company has been at the forefront of the meal kit market.

Several of my friends have been eating Hello Fresh a few times a week and assured me the 4-person meals are a lot different than they were when we tried them four years ago. Coincidentally, we cooked a HelloFresh meal kit exactly four years ago today, and I did a live video on my Facebook feed to talk about it. The memory popped up for me this morning.

This weekend, I cooked the first of two meals I ordered – Parmesan-Crusted Chicken with Creamy Lemon Tomato Spaghetti and it was…ok.

I wasn’t wow’d. The meal prep wasn’t that complicated, but that doesn’t mean it was fast, and the end results were just…ok.

My initial thoughts when I opened the packaging were promising. All of the problems I’ve had with previous meal kits related to logistics and packaging seem to be resolved. The meat was cold, not leaking and separate from everything else. Packaging was streamlined — there weren’t a dozen hard plastic cups, although they did send four packets of parmesan, which seemed excessive.

Once I got into the cooking, it was easy enough. Cut the (very underripe) roma tomatoes and spread out on a sheet pan. Zest the lemons, mince garlic and toss tomatoes with olive oil, garlic, salt, and pepper.

Then you “mound” the panko breading mix on top of the chicken breasts and bake hot until everything looks good. It took five extra minutes for the chicken breast breading to look crispy, and ten extra minutes for the tomatoes to soften, although they weren’t the roasted tomato amazingness I’m used to when I select my own (much more ripe) tomatoes to roast.

When I was done with this experiment, I felt ripped off. So, just to reinforce it I looked up the cost of ingredients and felt even more ripped off.

I signed up and took advantage of one of those “please come back!” deals with some complicated math of savings over the next several weeks of meals, which made this kit about $25 instead of $40.

I went to Grocery.Walmart.com to compare prices. To buy a whole package of everything in the kit (not just the individual portions) it was less than $20, and I would have a ton left over. I didn’t count Hello Fresh’s “fry seasoning” which the internet tells me is equal parts garlic powder, paprika and onion powder. I figure the packet was about 20 cents’ worth of seasonings.

When I re-joined HelloFresh, it automatically signed me up for discounts over the next six deliveries.

I already started the cancellation process.

Back to the drawing (or in this case, cutting) board.