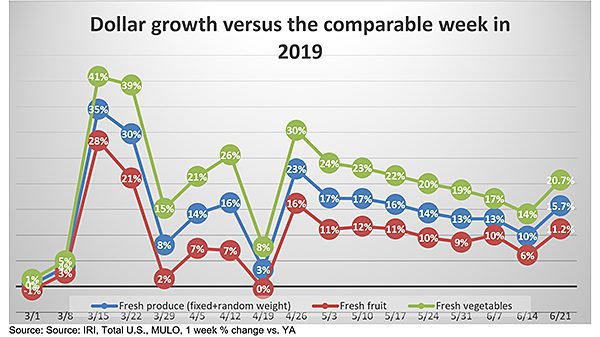 The week ending June 21st was Father’s Day weekend and it resulted in a significant boost for fresh produce, both fruit and vegetables. At the same time, the demand for center-store items, including frozen and canned fruit and vegetables, also remained strong.

This points to consumers still celebrating special occasions at home in addition to the many more at-home everyday meal occasions. As a result, grocery sales, and produce along with it, remained well above the 2019 base line. In fact, the fresh perimeter (meat, bakery, deli, produce, seafood and floral) doubled last weeks’ growth rate, at 19.1% for the week ending June 21 — three percentage points higher than the total store growth rate. 210 Analytics, IRI and PMA partnered to understand how produce sales continue to develop as states continued to loosen social distancing measures, including the reopening of restaurants.

During the week ending June 21, the combination of elevated everyday plus the holiday demand drove gains of 15.7% for fresh produce. Frozen and shelf-stable fruits and vegetables were up 28.3% and 18.3%, respectively. Year-to-date, fresh produce sales are up 10.8% over the same time period in 2019. Frozen fruit and vegetables increased the most, up 28.4% year-to-date and during the third week of June. This gain is in spite of limited assortment availability for frozen vegetables and fruit, down 11.9% in average items per store selling.

“We expected Father’s Day week to provide an above-average boost and it sure did,” said Joe Watson, VP of Membership and Engagement for the Produce Marketing Association (PMA). “The bump put us right back at mid April levels with double-digit gains for both fruit and vegetables. There is a valuable lesson in this for holidays to come. Consumers are still celebrating, but most are doing so at home in smaller numbers — boosting grocery spending far above prior year levels. This means we have to adapt our merchandising and marketing tactics accordingly.”

Fresh produce generated $1.4 billion in sales the week ending June 21 — an additional $193 million in fresh produce sales. Vegetables, up 20.7% from the prior year, easily outperformed fruit. However, at +11.2%, fruit had its highest gains since mid-May. Despite this significant bump in performance, the gap between fruit and vegetables was the widest in several weeks.

“The boost in fresh produce came hand-in-hand with a very strong week for the meat department, particularly grilling items,” said Jonna Parker, Team Lead, Fresh for IRI. “Despite all that has changed in the past four months, meat and produce continue to rule the grocery world. Now the question is how we can maintain this positive momentum. Clearly, firing up the grill bodes well for fresh sales. Our survey data at IRI shows one-quarter of consumers cook more meals from scratch now than they did pre-pandemic, however, shoppers are running out of ideas. Grilling season provides us with a host of new recipes for tried-and-true vegetables and fruits.”

The 15.7% sales increase drove the fresh produce share to 83% of combined sales, just one point shy of its 2019 average of 84% and the highest point since the start of the pandemic. Shoppers on the Retail Feedback Group’s Constant Customer Feedback (CCF) program commented on the improved availability, quality and freshness in the produce department in recent weeks. Out-stock-comments were few and far between, and IRI data shows an increase of 1.8% in the average number of fresh produce items sold per store the week of June 21 versus year ago.

One shopper wrote, “I’ve been impressed with the range of produce offered during the coronavirus. Keep up the good work!”

On the other hand, assortment and availability in frozen fruits and vegetables has been down for months by about 10%, according to IRI.

“The store did not have any of the frozen vegetables I usually buy,” said a shopper on CCF.

“After stalling at 82% for several weeks, fresh is now within one percentage point of its typical cross-store share,” said Watson. “To maintain this share, it will be important to keep people engaged with fresh produce across all meal occasions, from breakfast to dessert and the morning to the evening snack. This means an important role for fruit, that has seen a bit more of an up and down performance throughout the pandemic.”

After tracking behind dollars the first two weeks of June, fruit volume once more outpaced fruit dollars the week ending June 21 by half a percentage point. In vegetables, dollar gains did outpace volume, at +20.7% versus +17.9%. At 2.8 percentage points, the gap has narrowed somewhat from 4.1 points the week prior.

Berries took over as the top growth item in terms of absolute dollar gains for the week of June 21 versus year ago. Lettuce and tomatoes are second and third.

“This week we are seeing many of the same suspects in the top 10, but a completely different order yet again,” said Watson. “Number one just a few weeks ago, cherries dropped to seventh place just behind oranges, that continued their hot streak with another +63.2% week. Melon was this week’s newcomer  with an additional $12 million in dollar gains over the same week last year.”

“The later Father’s Day meant a bit of a down week for melons and corn last week, but good recovery this week,” said Watson. “Corn is a strong item for cross-merchandising during grilling season. However, the corn market is making it hard for retailers to promote it at the moment and that is one of the reasons why we saw it drop out of the top 10 items in terms of absolute dollar gains.”

After a drop the week ending June 14, gains jumped back up to May and early June levels.

“It is important to keep in mind that Father’s Day 2019 fell a week earlier on June 16,” said Parker. “This week, we have the benefit of holiday sales going against a regular week in 2019, so we will have to see if we can keep the momentum going and stay in the double digits.”

Up from three items last week, five out of the top 10 items saw double-digit dollar gain increases during the week of June 14 versus the comparable week in 2019. Peaches and grapes saw dollar sales pressure.

All categories but carrots increased sales by double-digits the week ending June 21 versus year ago. Lettuce was the top sales category followed by tomatoes and potatoes. Asparagus made it back into the top 10 lineup, dropping corn to number 11.

“The strength in the overall vegetable number comes from high consumer engagement across the board versus just a handful of big sellers,” said Parker. “That bodes well for consistency and many more weeks of high gains for vegetables, especially as produce price inflation has been far less than in other fresh departments.”

Fresh cut salad continued to be a strong performer over the week ending June 21. Dollar gains topped 15% over the same week year ago — its highest gain since the end of April.

Frozen fruit and vegetables saw robust gains during the week ending June 21 versus year ago, but canned items only saw a mild boost. The continued strength of frozen fruits and vegetables is remarkable, underscoring that frozen served as a means to stock up on items in March during the panic buying weeks, but are also being used and replenished at high rates. While growth rates for frozen and canned have consistently exceeded those of fresh, the latter’s size drove much higher absolute dollar gains every week.

Floral sales had a strong Father’s Day week, up 14.1% over the same week in 2019. This is up from being right around last year’s levels the past three weeks.

The fresh perimeter departments’ dollar gains exceeded those of total store and matched the gains in center-store, at +19.1%. While produce came in slightly below the total perimeter, it was the very strong meat performance that pulled up the total fresh number to its highest point in about a month. For the first time since March, fresh bakery (non UPC, random weight), showed an increase over the same week last year and the deli department has cut its losses down from 25% in mid April to just 6% the third week of June. 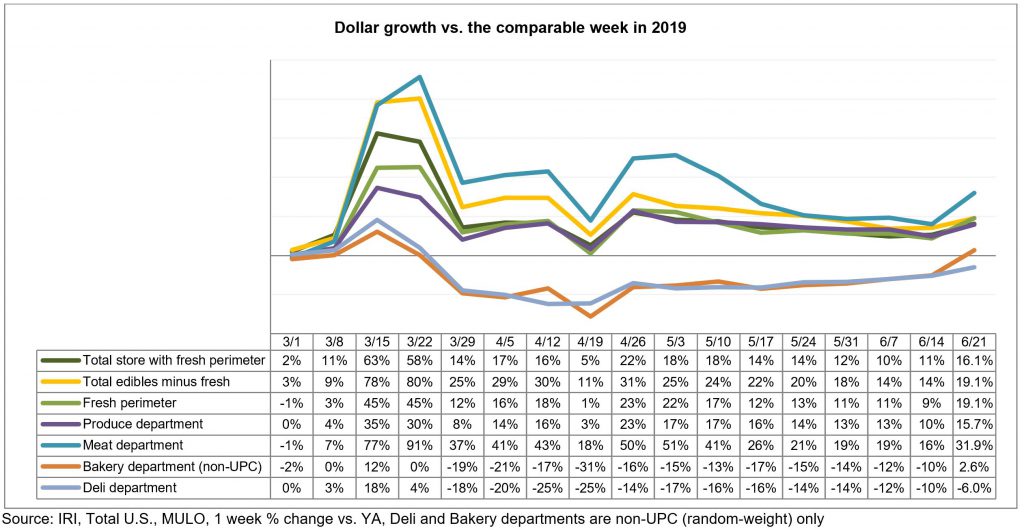 Produce demand continues to be in flux as consumer engagement with retail and foodservice is still evolving. The past few weeks have seen spikes in COVID-19 cases and hospitalizations in some regions that had previously relaxed restrictions. The new outbreaks are likely to impact business activities, restaurant engagement and shopper behaviors in those regions. These outbreaks are also likely to prompt the continuation of social distancing measures and behaviors in hard-hit states. In IRI’s ongoing consumer sentiment tracking survey, nearly half of Americans are still extremely concerned about the Coronavirus. Also, the share of consumers more concerned about COVID-19 than the week prior is up from 15% to 22%. The Trump administration announced last week that it is preparing for a second wave of COVID-19 that could hit the country in the fall. Between the continued impact of COVID-19 and significant economic pressure, it is likely that demand for produce in retail will remain strong in the next few weeks and months.

Next week’s report will cover the last full week of June, followed by the week of July 4th. Depending on the level of preparation, consumers may have started on their July 4th shopping. Independence Day is traditionally strong produce holiday and much like Memorial Day, about half of shoppers are expecting to celebrate the Fourth differently, with less travel and smaller celebrations.