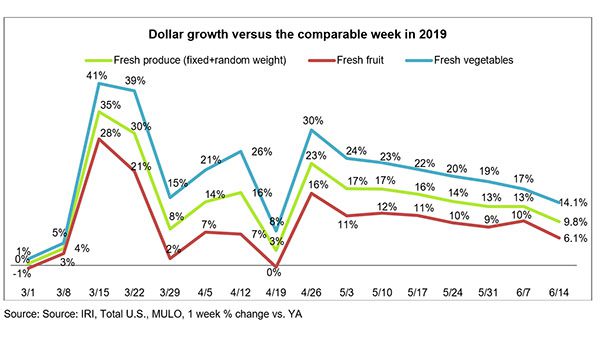 While summer sales patterns are in full swing, demand for fresh, frozen and canned produce continues to shift.  Consumers increasingly have the opportunity to dine out and many are fatigued with their tried-and-true recipes. Restaurant transactions and spending gained back ground during the second week of June, but grocery sales, and produce along with it, remained well above the 2019 base line. This is in spite of going up against the Father’s Day 2019 sales bump that fell one week earlier than in 2020. 210 Analytics, IRI and PMA partnered to understand how produce sales continue to develop as states are emerging from the sales effects of the pandemic.

During the week of June 14, elevated everyday demand drove high gains for fresh, frozen and shelf-stable fruits and vegetables. Fresh produce year-over-year growth for this week versus the comparable week in 2019 increased 9.8%, down several points from the week prior. Year-to-date, fresh produce sales are up 10.6% over the same time period in 2019, a steady hold from prior week. Frozen fruit and vegetables increased the most, up 22.7%. This gain is in spite of limited assortment availability for frozen vegetables and fruit, down 9.0% in average items per store selling.

“Seemingly, fresh produce has entered into a more consistent sales trend over the past four weeks,” said Joe Watson, VP of Membership and Engagement for the Produce Marketing Association (PMA). “However, looking deeper, inflation is also rising in produce, fresh, frozen and canned. While the two big summer holidays, Father’s Day and July 4th have the ability to significantly boost produce sales at retail, states are continuing to open more widely. It will be interesting to see how consumers re-engage and we will be watching demand on key items. Retailers are gearing up for the strong summer season with fruit taking center stage now through Labor Day.”

Fresh produce generated $1.4 billion in sales the week ending June 14 — an additional $125 million in fresh produce sales. Vegetables, up 14.1%, still outperformed fruit (+6.1%), but the gap remained in the single digits. While the steady erosion of gains seen since the last week of April took a pause last week, it started back up second week of June, eroding about three percentage points.

“More than three months since the two biggest panic buying weeks in the history of grocery retailing, vegetable gains are still in the mid teens versus year ago whereas the fruit performance is much more up and down,” said Jonna Parker, Team Lead, Fresh for IRI. “Gains in vegetables illustrate that consumers are still engaging in a lot more at-home meal occasions and the challenge now becomes how to keep those meals fun and varied. Provide tips and recipes on social media and in-store to help consumers with their meal line-up fatigue.”

Shoppers on the Retail Feedback Group’s Constant Customer Feedback (CCF) program commented on the improved availability, quality and freshness in the produce department in recent weeks. Out-stock-comments were few and far between, and IRI data shows an increase of 1.6% in the average number of fresh produce items sold per store the week of June 14 versus year ago.

One shopper wrote, “I was very pleased with the selection and freshness of the produce. I know it has been hard to keep up with and they have done a stellar job!”

On the other hand, assortment and availability in frozen fruits and vegetables has been down for months by about 8-10%, according to IRI. “The selection of frozen vegetables was terrible again. The case was half empty,” said a shopper on CCF.

At $1.4 billion in sales during the week of June 14, fresh produce is significantly larger than shelf stable ($166 million) and frozen fruits and vegetables ($134 million). This means that despite lower growth percentages, fresh has been gaining back much of its lost share.

“It is good to see fresh has regained most of the dollars it lost to canned and frozen during the height of the pandemic,” said Watson. “Whether we can make the push to regain the last two points will highly depend on the performance of fresh fruit in the next few weeks.”

With dollar gains at +9.8% during the week ending June 14, and volume sales at +7.6%, the gap between fresh produce volume and dollar gains narrowed slightly to 2.2 percentage points. This marks the fourth week where dollar sales outpaced volume sales, but compared with the 15-point volume/dollar gap in fresh meat, produce inflation remained relatively mild.

Both fruit and vegetables saw volume growth tracking ahead of dollars the week of June 14 versus the comparable week in 2019. However, the volume/dollar gap for fresh vegetables was increased to more than four percentage points. In fruit, dollar gains tracked just 0.2 points ahead of volume this week, less than the week prior.

The top three growth items in terms of absolute dollar gains for the week of June 14 versus year ago were lettuce, tomatoes and berries.

Strong demand is driving volume along with dollar gains across the board. While some fruits and vegetables are seeing inflation, for others, prices remain depressed. Inflation is seen for several tropical and citrus fruits, including mangoes, papayas, tangelos and tangerines. On the vegetable side, inflation is seen for items such as asparagus, beans, corn, garlic and potatoes. Continued volume/dollar gaps persist for other areas, including avocados, cherries, Brussels sprouts and celery.

“The strengthening demand coming out of foodservice combined with the continued elevated demand seen in retail will continue to balance out supply and demand in the coming weeks,” said Watson.

Reversing the prior week’s acceleration of sales gains, growth for the week ending June 14 declined several points. “It is important to keep in mind that Father’s Day 2019 fell on June 16 so sales gains for this week had to go up against last year’s holiday bump,” said Parker. “With Father’s Day being a big grilling holiday, we would typically see big spikes in things like corn, melon and the fixings for fruit platters and salad to go along with the dad’s favorites on the grill.”

Just three out of the top 10 items in terms of dollar sales saw double-digit increases during the week of June 14 versus the comparable week in 2019. Peaches are a newcomer in the top 10 in weekly sales, despite gains being down in both dollars and volume versus the same week year ago. Several others, including melons and grapes, saw dollar sales pressure. Tangerines gained for the second time in four weeks.

The top 10 fresh vegetable items looked very different in performance than fruit. All but one vegetable category grew the week ending June 14 versus year ago and eight gained double digits. Lettuce was the top sales category followed by tomatoes and potatoes. Mushrooms have emerged as a strong seller during the pandemic as well, with double-digit gains ever since the second week of March. Corn sales were off, likely directly related to the different timing of Father’s Day.

Fresh cut salad continued to be a strong performer over the week ending June 14. Dollar gains topped 11% over the same week year ago once more.

“Lettuce has been a strong performer throughout the pandemic,” said Watson. “Fresh cut salad is ideally positioned to help consumers create a quick meal, whether lunch or dinner as life, and with it the pressure of time, is starting to get back to normal for many shoppers.”

Frozen fruit gains held steady the week of June 14 and has been the area with the highest growth for weeks. Canned fruit and vegetables held stable as well, demonstrating that consumers may have stocked up in great numbers in March, but are also using their stash and looking to replenish. While growth rates for frozen and canned have consistently exceeded those of fresh, the latter’s size drove much higher absolute dollar gains every week.

Produce remained a steady, middle of the road performer during the week of June 14 compared with the other perimeter departments. Meat continued to lead all dollar gains, at +15.9%. But fresh bakery and deli continued to pull the overall average for the perimeter departments down. While deli meat and cheese have been selling above last year’s levels, deli-prepared remained a struggle with many self-serve counters closed and/or converted to pre-packaged sales. In all, the fresh perimeter gained 8.7% over last year, which was about 6 points less than center-store edibles. 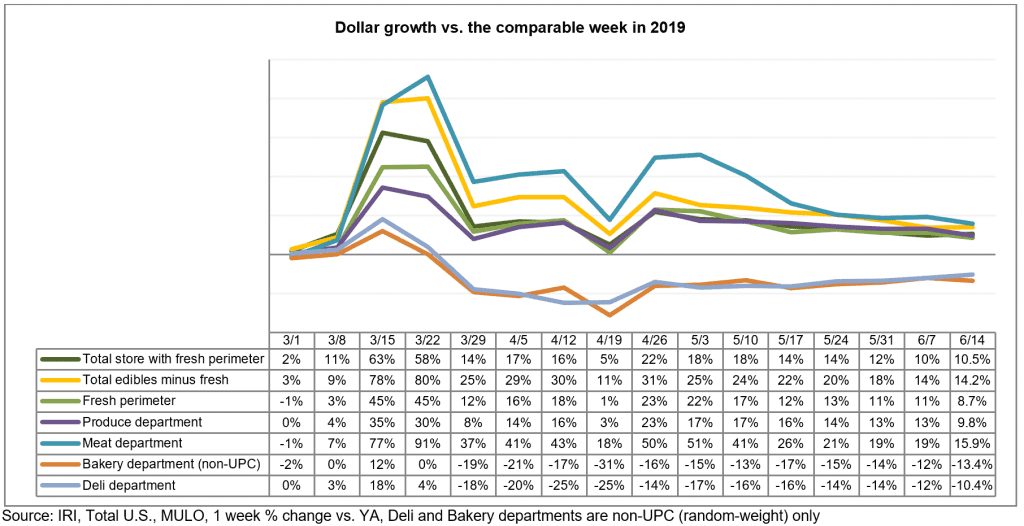 Next week’s sales report covers Father’s Day 2020 and will likely see a nice bump over the same week in 2019 as everyday and holiday demand continues to sit above last year’s baseline. From there, July 4th is around the corner and grilling season is in full swing. Given the disproportionate impact of the virus and economic collapse over the past three months, it is highly likely that the recovery will be highly disproportionate as well. The local speed of economic recovery along with any levels of latent social anxiety to re-engage with foodservice will drive the demand at retail in the upcoming weeks.