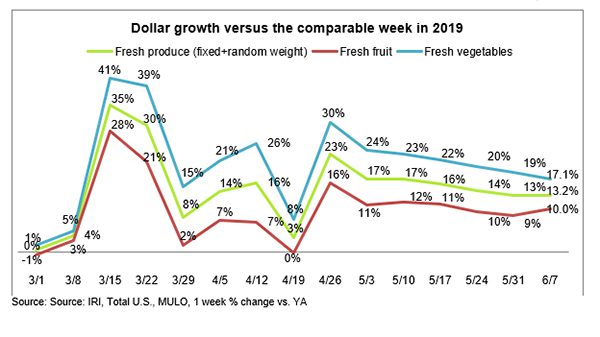 Additionally, trends in trips, basket size, product selections and channel choices continue to change as pandemic shopping develops. This results in an ever-changing demand landscape for fresh produce, and frozen and canned fruits and vegetables along with it. 210 Analytics, IRI and PMA partnered to understand how retail sales for produce are developing throughout the pandemic and as restaurants around the country are starting to re-open their doors.

During the first week of June, elevated everyday demand drove double-digit produce gains for fresh, frozen and shelf-stable fruits and vegetables. Fresh produce year-over-year growth for the week of June 7 versus the comparable week in 2019 increased 13.2%, the exact same gain as the week prior. Year-to-date, fresh produce sales are up 10.5% over the same time period in 2019. Frozen fruit and vegetables increased the most, up 22.3%. This gain is in spite of limited assortment availability for frozen vegetables and fruit, down 9.5% in average items per store selling.

“The fresh produce industry is resilient,” said Joe Watson, VP of Membership and Engagement for the Produce Marketing Association (PMA). “Throughout the COVID-19 crisis, retail has been the primary option for consumers to engage with fresh produce. As restaurant reopening across the country is bringing foodservice back online, demand is growing stronger each week. Understanding the changes and challenges ahead for our industry is of critical importance and staying connected on how we will worth together will bring forth successful solutions for all.”

Fresh produce generated $1.4 million in sales the week ending June 7 — an additional $166 million in fresh produce sales. Vegetables, up 17.1%, still outperformed fruit (+10.0%), but the gap was the smallest it has been since mid March. Additionally, this is the first week since early May that sales gains held steady versus the slow erosion seen each week. Fresh vegetable gains have been double digits for 12 out of the last 13 weeks.

“Last week, we saw cherries lead all produce categories in absolute dollar gains versus year ago. This week, fruit has significantly narrowed the gap with vegetables, once more with a big performance by cherries,” said Jonna Parker, Team Lead, Fresh for IRI. “As we saw in prior weeks, the trends of old are holding true even amid the pandemic. The summer season is in full swing, which means we need to optimize impulse and planned purchases to the fullest extent possible. Our weekly survey finds that consumers are looking to treat themselves and are tired of the same meal lineup. Fragrant, colorful, seasonal fresh fruit is a great way for the store to help provide that for them.”

Shoppers on the Retail Feedback Group’s Constant Customer Feedback (CCF) program commented on the improved availability, quality and freshness in the produce department in recent weeks.

One shopper wrote, “I always find the freshest produce and have been extremely pleased with the large selection during the COVID crisis. Produce is my most important area to shop in the store.”

At $1.4 billion in sales during the week of June 7, fresh produce is significantly larger than shelf stable ($169 million) and frozen fruits and vegetables ($135 million). This means that despite lower growth percentages, fresh has been gaining back much of its lost share.

“During the stock up weeks, the share of fresh produce fell to a low of 70%,” said Watson. “During the first week of June, we had to give up a percentage point to shelf-stable, but fresh sales are certainly in much better shape than March and April.”

Other consumers thanked the store for the extra hygiene-focused measures, “I appreciate that there were hand sanitizing stations at both ends of the produce department since this would be an area where people would be ‘touching’ to inspect the produce before they make their purchases.”

Out-stock-comments were few and far between, and IRI data shows an increase of 1.9% in the average number of fresh produce items sold per store.

With dollar gains unchanged at +13.2% during the week ending June 7, but volume sales accelerating slightly to +10.6%, the gap between fresh produce volume and dollar gains narrowed slightly to 2.6 percentage points.

Both fruit and vegetables saw volume growth tracking ahead of dollars the week of June 7 versus the comparable week in 2019. However, the volume/dollar gap for fresh vegetables was increased to more than three percentage points. In fruit, dollar gains tracked 1.7 points ahead of volume this week, less than the week prior.

The top three growth items in terms of absolute dollar gains for the week of June 7 versus year ago were cherries, lettuce and tomatoes.

“Just barely beaten out by tomato sales gains, berries dropped out of the top three drivers of new dollars for the first time in many weeks due to cherries having a massive week once again,” said Watson. “But cherries had a massive week once more. Cherries delivered an additional $25 million versus the same week year ago, representing a nearly 80% increase in dollars and +104.6% in pounds. Oranges and potatoes remained pandemic powerhouses even in the midst of the summer season with gains of 57.4% and 23.7% over the same week in 2019.”

Strong demand is driving volume along with dollar gains across the board. While some fruits and vegetables are seeing inflation, for others, prices remain depressed. Inflation is seen for several tropical fruits, including mangoes, tangelos and tangerines. On the vegetable side, prices for potatoes, corn, beets and garlic are up double-digits over year ago. Continued volume/dollar gaps persist for other areas, including avocados, cherries, grapes and plums. “The strengthening demand coming out of foodservice combined with the continued elevated demand seen in retail will continue to balance out supply and demand in the coming weeks,” said Watson.

“Reversing a three-week trend that saw a one to two-point decline in the fruit growth rate, fruit gains accelerated to +10.0% the week of June 7 versus the same week year ago,” said Parker. “Berries may not be a top three driver of new dollars the first week of June, but they were still nearly twice as big in dollar sales than the number two, melons. In all, citrus sales performed strongly, closely related to summer sales patterns and building the immune system, but also boosted by increases in price per volume for some.”

Five out of the top 10 items in terms of dollar sales saw double-digit increases during the week of June 7 versus the comparable week in 2019, whereas grape sales continued to see dollar sales pressure. Tangerines saw a gain for the first time in four weeks.

All top 10 vegetable items in terms of dollar sales gained double-digits the week ending June 7, with the exception of carrots. Lettuce was the top sales category followed by tomatoes and potatoes. Mushrooms have emerged as a strong seller during the pandemic as well, with double-digit gains ever since the second week of March.

In addition to double-digit sales gains for lettuce overall for three months running, fresh cut salad (included in the total lettuce number) continued to be a strong performer over the week ending June 7. Dollar gains topped 11% over the same week year ago, with weekly sales of more than $137 million — an additional $14 million. “The strength of bagged lettuce shows that consumers are still looking for healthy and convenient short cuts,” said Watson. “With salad bars still largely closed, bagged salad provides a terrific cross-merchandising opportunity for rotisserie chicken, frozen pizza or other time-saving solutions as shoppers are starting to go back to work.”

Frozen fruits and vegetables had their lowest growth rates since mid March, but were still up nearly 37% for fruit and 19% for vegetables. The same is true for canned fruits and vegetables that have seen tremendous growth ever since mid-March, with the one exception of the week of April 19, which was Easter week in 2019. While growth rates for frozen and canned have consistently exceeded those of fresh, the latter’s size drove much higher absolute dollar gains every week.

During the first week of June, the total gain for the fresh perimeter (+11.2%) was once more ahead of that for total store, up 9.8%, though slightly behind center-store edibles that increased 13.7%. Both the meat and produce department sales held steady versus the week prior in the mid to high teens, but continued struggles in the deli and bakery departments pulled down the average perimeter performance. 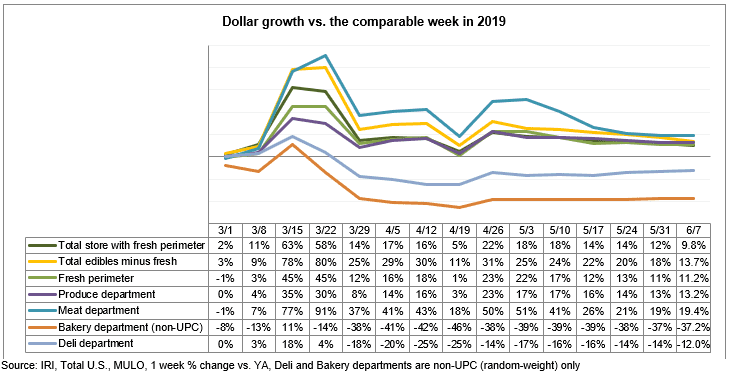 Though three months into the pandemic, demand patterns continue to shift. In most states, consumers are able to resume shopping, dining and working out of home. Restaurants and bars are reopening and summer vacations are under way in many states. However, fewer consumers are traveling this summer, kid summer camps are either closed or open with limited capacity in many places and restaurants dine in options have capacity restrictions limiting sales and transactions. Additionally, early June retail sales may have been affected by shortened store hours due to local curfews, particularly in urban areas.

Given the disproportionate impact of the virus and economic collapse over the past three months, it is highly likely that the recovery will be highly disproportionate as well. The local speed of economic recovery along with any levels of latent social anxiety to re-engage with foodservice will drive the demand at retail in the upcoming weeks.