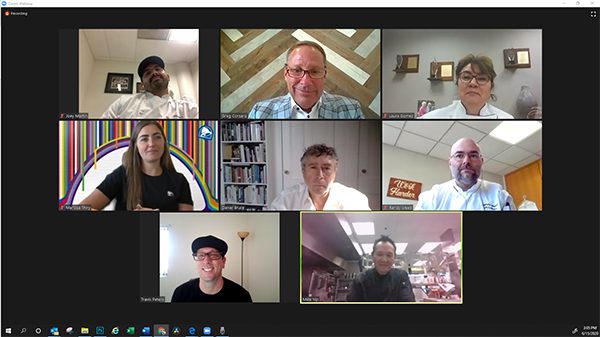 But, like we’ve all pivoted over the past three months, the conversation during United Fresh Live on June 16 was framed around managing foodservice during the COVID-19 crisis.

The diverse base of winners ranged from quick service to retirement communities and retail foodservice, a new category added this year.

“We gave people bulk ingredients and it allowed them to interact with our food a different way and take it home and build their own tacos and nachos with their families,” she said. “A lot of the fans to go relive that love they have for different products.”

Laura Gomez, executive chef for The Stratford Retirement Community had a different take on how to deal with diners who were confined to their rooms. This included serving hundreds of box lunches and dinners instead of offering cafeteria dining.

“The other thing that we implemented here was a grocery store,” she said. “We opened it to the residents in case they wanted us to order something for a meal. They didn’t have to worry if they needed something because they had to stay in their rooms for more than two months.”

“We didn’t want to leave out the adults, so the Community Food Bank of Eastern Oklahoma hired out restaurants to make adult meals and we would distribute those at a site.”

The COVID-19 crisis has been an unprecedented event for foodservice, and chefs shared some issues and trends that have emerged, that are likely to remain for the months to come.

“I’ve been asking if they could adapt to smaller pack sizes for smaller restaurants because I don’t want to waste anything and I refuse to,” he said.

For Dan Bruce, executive chef at the Boston Harbor Hotel, early shortages of items like fish and meat have led to fresh produce getting a larger portion of the plate.

“I found here when the restaurants closed it was very hard to get fish, so a lot transitioned into a lot more fruits vegetables, fresh herbs, grains, and we see that being part of how we reopen as well,” he said.

Joey Martin, Senior Executive Chef for the University of California Los Angeles, personalizing meals will be more common, and changes to facilitate more local produce and working closer with farmers.

“We took advantage of some of the things that weren’t really there for us before,” he said. “Different themes for holidays, for Mother’s Day we started offering more brunch-like items.”

Weed said customers also are past the panic-shopping mode and are exploring fresher produce and more culinary items at retail, like fresh herbs, too cook more at home.

Peters said he hopes changing shopping and dining patterns will stick around.

“I see the glass half full of COVID has forced people to rethink how they shop and maybe they aren’t going to grocery stores as often…maybe they’re getting to know their local produce growers,” he said. “Maybe not everybody will need a watermelon 365 days a year. It’s created a new awareness.”

Watch the replay of the session here:

Pamela Riemenschneider is the Retail Editor for Blue book Services.