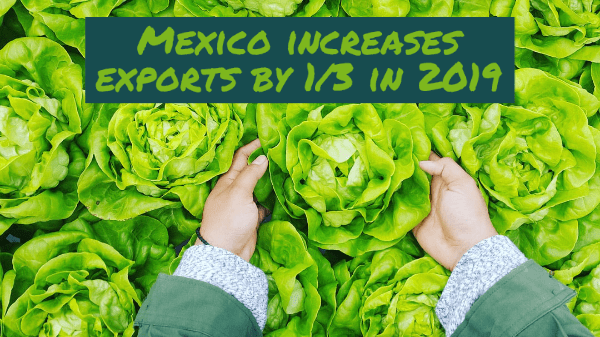 Mexico recorded a lettuce export worth $309 million in 2019, a year-to-year increase of 32.6 percent, according to data from the Ministry of Economy, as reported by Opportimes.

The amount set a new record, with the destinations being the United States (99.2 percent), Canada (0.6 percent), Belize, and Japan.

Mexico set themselves as the third ranked country with the most lettuce exports last year, behind Spain and the U.S. For its part, U.S. lettuce exports totaled $539 million, a year-to-year increase of 5.3 percent with Canada being the main destination receiving 85.8 percent. Mexico and Taiwan were also destinations, receiving 4.9 percent and 4.1 percent respectively.

The third biggest vegetable export per value for the U.S. during the 2017-2019 season was lettuce, with fresh romaine accounting for 5 percent or $402 million of the totals exported during that period.

Throughout the last two decades, U.S. and Canadian consumers have moved away from the iceberg variety as the salad making choice and replaced it with other varieties. Lettuce exports have actually declined in the past decade; however, these types of lettuce have yielded earnings of $100 million, representing a 33 percent growth.

Detroit remains Canada’s main port for lettuce exports, even as the value of exports has decreased in the past decade and shippers explore other port options such as Port Huron, Michigan. Detroit still accounts for with 26 percent of the total exports.