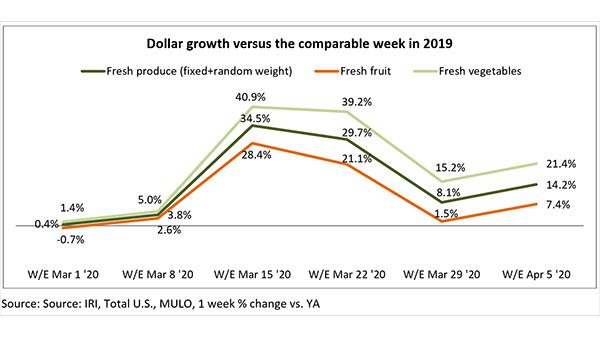 As the COVID-19 outbreak accelerated across states during the first week of April, grocery shopping continued to be affected. Produce sales at retail remained highly elevated during the week ending April 5, while the foodservice side continued to see deep declines. 210 Analytics, IRI and PMA partnered up to understand the effect for produce in dollars and volume throughout the pandemic.

The fundamentally different consumer engagement with produce amid COVID19 continued to show a three-way split of the produce dollar between fresh, frozen and shelf-stable during the week of April 5.

“Sales for the first week in April were likely influenced by the earlier Easter and a higher everyday demand that is driving a new baseline that sits well above the old normal,” said Joe Watson, VP of Membership and Engagement for the Produce Marketing Association (PMA). “At the same time, sales results must be seen against the backdrop of many stores having shortened opening hours, closed service departments, metered entry of shoppers, purchase limitations on popular items and continued out-of-stocks for others. Also think about the effects of cancelled events like March Madness on popular produce items used in entertaining.”

The March dollar growth trend line for fresh fruit shows very strong results for the week endings March 15 and March 22. The subsequent two weeks continued to have highly elevated sales, particularly for fresh vegetables. Compared with the same week in 2019, fresh produce generated an additional $170 million in sales, of which $129 million was generated by vegetables. It is important to point out that stockouts and purchase limits may have affected reported gains. Additionally, distributors are finding creative ways of going consumer-direct and some restaurants now selling groceries. Those sales are not reflected in these numbers.

The all important question is how much of a role price played in all this, with the heavily reduced foodservice demand providing ample produce supply. At the onset of coronavirus in the U.S., dollar and volume sales were relatively close together for total produce, at +0.4% for dollars and +1.3% in volume. Starting with the week ending March 22, volume sales far exceeded dollar sales, which would indicate deflation setting in at retail for some areas. For the week of April 5, volume increases exceeded dollars by nearly five percentage points.

The gap was widest for vegetables, particularly the last two weeks. For the week ending April 5, volume sales gains for vegetables were more than 10 points higher than dollar growth.

For the fourth week in a row, potatoes were the growth leader in absolute dollars, selling $35 million more than in the comparable week in 2019, or +66.9%. Others that gained big in dollars were berries (+$17 million), onions and tomatoes (+$15 million, each) and oranges (+$14 million). However, at the category level, big differences between dollars and volume were observed for some fruits and vegetables as well. “Avocados, onions and carrots are three big ones that jump out at me,” said Watson. “Others outside the top 10 in absolute dollar growth were limes (16 percentage point volume/dollar gap), asparagus (13 points), Brussels sprouts (14 points), cabbage (12 points) and celery (30 points. Celery has been a top seller amid the juicing trend, but for the week of April 5, dollars are down 3% whereas volume sales were up 27%.”

“Many produce items are loose and unbagged, thus allowing the potential for contact by other customers,” noted a shopper on the CCF program.

“I suggest bagging produce items prior to putting items out on shelves.”

Another said, “I love the touchless hand washing station in the entryway. It would be nice to see that in the produce section as well. I imagine people touching fruits and veggies and then putting them back is a good way to spread disease.”

“Despite continued reassurances that fresh produce is safe to consume, we are dealing with a situation where perception is reality,” said Parker.

Fresh Versus Frozen and Shelf-Stable

Consumers continued to split their produce dollar three ways during the week of April 5. Frozen and canned vegetables had ongoing strong growth during the first week of April and have been leading sales growth since the onset of coronavirus during the early weeks of March. 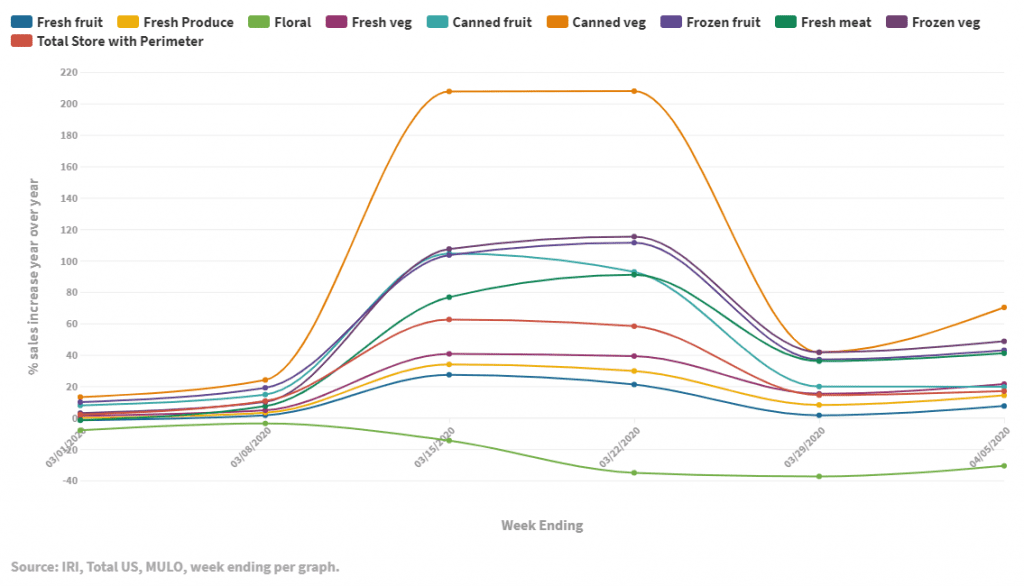 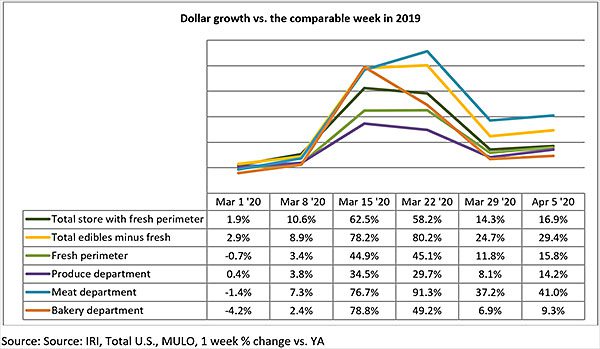 Consumers in most European countries that were affected weeks before coronavirus upended sales patterns in the U.S.. Most countries are shifting to a moderately elevated purchasing level post stockpiling. For food, the everyday baseline has been trending between 10 and 20 percent above the comparable week in 2019 for Italy, Greece and the Netherlands and between five and 10 percent for France and Germany. Non-edible sales have mostly leveled off and declined for some. Frozen food continues to see above-average gains in these countries. Produce is incorporated in the “fresh” line.

Please recognize the continued dedication of the entire grocery and produce supply chains, from farm to retailer, on keeping the produce supply flowing during these unprecedented times. #produce #SupermarketSuperHeroes  210 Analytics and IRI will continue to provide weekly updates as sales trends develop, made possible by PMA.

Anne-Marie Roerink is the president of 210 Analytics.