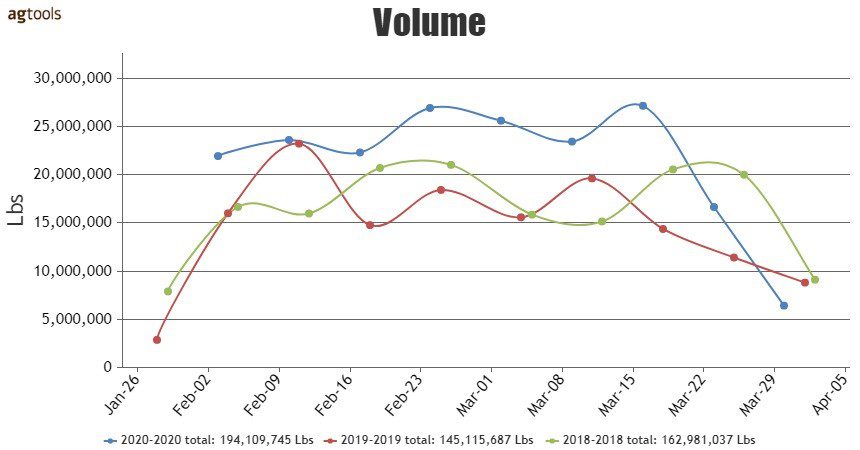 This year’s Mexican lime crop has been large and high quality, and through the first half of March demand was keeping up.

Then the restaurants closed. Prices and volume have dropped from there.

“During this year 2020 the lime crop has had better volume than in prior years,” said Raul López, an Agronomist Engineer for Agtools.

Blue Book has teamed with Agtools Inc., the data analytic service for the produce industry, to look at a handful of crops and how they’re adjusting during the pandemic.

“In February and half of March, the demand for was fairly stable,” he said. “In the second half of March there was a drastic decrease in demand even below that of 2018 and 2019. This decrease was due to the current public health emergency. We trust that it will not drop further and that demand will return.”

“When the public health emergency was declared, the prices showed a downward trend,” López says. “However, this was a similar trend as in previous years. We will have to see at what point the downward prices level off.”

PRICES OF LIMES FROM MEXICO IN CHICAGO, SIZE 230

Prices at the Chicago terminal market had been lower that the previous two years.
“During the second half of February and beginning of March the price was more stable,” Lopez says. “With the public health emergency, the price increased for a few days, only to drop back down to its earlier level. In the last few days there has been a slight increase recovery, however it is too early to see a lengthy trend, though the price is still lower than in the last two years.” 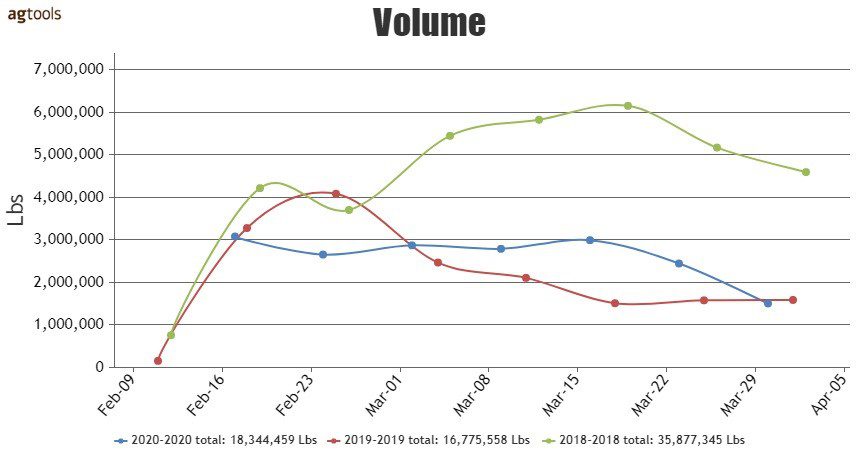 Mexican Valencia orange volume has been a little higher than last year but significantly down from 2018. California Valencia season is still about a month away.

The market for oranges in Nogales, AZ has had a stable performance in March, Lopez says.

“Even with the public health emergency, the pricing has not been volatile as it was in 2018. Nonetheless, with the current environment prices could make significant moves in either direction.”

California navel oranges have seen a slight rise in prices in the past month, as retail demand has been strong.

PRICE FOR VALENCIA ORANGES FROM MEXICO, SIZE 72S IN THE TERMINAL MARKET OF LOS ANGELES

“Reflecting their market of origin, the Valencia orange from Mexico, in the terminal of Los Angeles is a very stable market,” Lopez says. “Even though there was a slight decrease in price at the beginning of March, there has been stability with prices above those of 2019.”