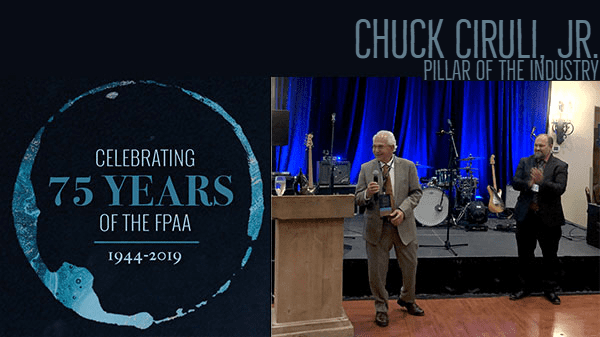 TUBAC, AZ – Chuck Ciruli Jr. was honored by the Fresh Produce Association of the Americas for a lifetime of leadership, both locally and nationally.

Ciruli garnered the group’s Pillar of the FPAA award November 8 during its 51st annual meeting.

One of the noteworthy items Ciruli was known for is his urging members of the association to not just think about their small part of the supply chain but to think bigger.

“It’s paramount to be part of the global industry,” Ciruli said.

Tom Stenzel, CEO of the United Fresh Produce Association, BB #:145458 said he worked with Ciruli on United Fresh’s board, and he has been a great advocate for Nogales-area companies in the broader produce industry.

Ciruli began in the produce industry at age 4 when his father used Chuck’s image on the packaging of his company, Ciruli Brothers. After Chuck’s father passed, Ciruli Brothers folded. However, in the late 1960s, Ciruli opened Ciruli Brokerage Co. in Nogales and then Amex Distributing a few years later.

After a few years of handling multiple produce deals, he began to specialize in importing mangos and even worked to form the National Mango Promotion Board to broaden the item’s profile in the United States, serving as the board’s first chairman.

In the 1990s, Ciruli convinced his sons, Chuck III and Chris, to join him in the produce industry, as they reopened Ciruli Brothers, BB #:155976 which the two sons continue to operate today.

“I’m very humbled,” Chuck Ciruli Jr. said at the ceremony. “This is one of the finest industries in the world because we’re doing something healthy for the world.”