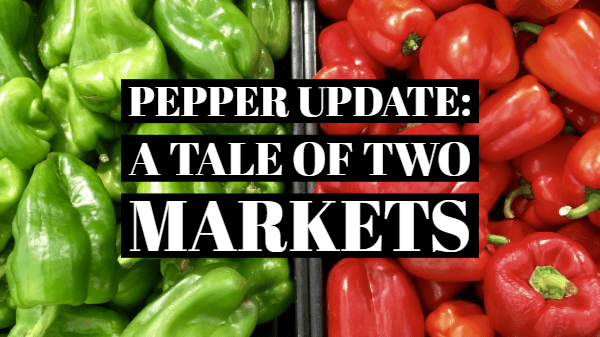 Bell pepper prices are either very high or pretty low, depending on which color you want to buy.

Red bell prices have been high for about a month, and growers expect them to remain high until the desert season starts in early October.

He said a few more growers will have supplies on the coast of California in September, but prices should remain high with light supplies until October.

Eric Bolestra, sales manager with Ken Corbett Farms, LLC BB #:274653 Lake Park, GA, said he expects the red pepper market to soften a little in September, as Canada remains in the market in the mid-$20 range for 25-pound cartons.

Meanwhile, green peppers can be found in local deals across the country, not to mention people’s backyard gardens, Burton said.

Green bell pepper prices are about $10 per 1 1/9 bushel carton from Michigan and North Carolina in late August, down from about $15 a month ago, according to USDA. F.o.b.s are $11-15 per carton from San Joaquin Valley, CA.

Bolestra said August is usually a low market for green peppers, but he expects prices could come up to the $12-14 per carton range, with good supplies from Georgia and the Carolinas.

“In Georgia, we’re watching the hurricane,” he said, referring to Hurricane Dorian, which is expected to hit Florida and possibly further north over Labor Day weekend.

“We should see a strong push on Mexican peppers by the middle of September and into the first week of October,” he said. “The crops have been very strong out of British Columbia this summer, and we’re expecting a strong finish to that crop as we phase into our Mexican and offshore program.”