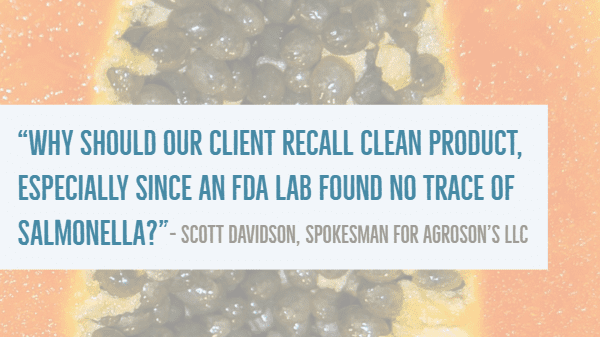 The papaya importer named by the Food and Drug Administration as “likely linked” to the Salmonella outbreak that’s sickened more than 70 consumers says it has no role in the outbreak.

A spokesman for Agroson’s LLC, BB #:275358, Bronx, NY, whose Cavi brand papayas the FDA linked to the outbreak, says the FDA demand for a recall “is absurd.”

Scott Davidson with Davidson Law Group, the firm representing Agroson’s, said July 19 that FDA hasn’t been able to link the source of the outbreak to his client or anyone.

“Since July 1, FDA has sampled and released all inbound shipments of Cavi papayas,” he said. “Why should our client recall clean product, especially since an FDA lab found no trace of Salmonella?”

On July 19, FDA released an outbreak update saying despite being linked to the illnesses, “Agroson’s LLC refused to initiate a recall.”

Davidson said a 2017 salmonella outbreak was tied back to the farm in Mexico that Agroson imports from, and he thinks it’s an easy target in this outbreak.

A few days later, Mexican officials challenged the FDA advisory, saying the traceback was inconclusive and no salmonella had been found on any papaya tests.

On July 7, FDA named Agroson’s papayas as the likely source, despite no positive product samples.

Davidson said he’s looking into his client’s options, but a lawsuit against FDA is unlikely.