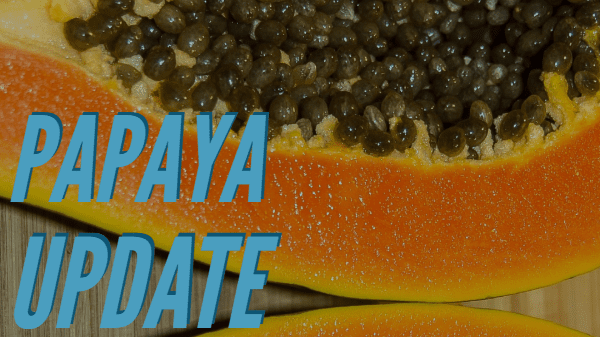 The Mexican government says the CDC and FDA’s advisory on Mexican papaya is premature.

According to a statement released by Ministry of Agriculture and Rural Development, the trace back is inconclusive, and the investigation being conducted by the CDC and FDA has not been completed.

Mexican officials said the FDA notified the Ministry that 62 cases of Salmonella Uganda infection have been identified in Connecticut, Florida, Massachusetts, New Jersey, New York, Pennsylvania, Rhode Island and Texas, but, according to a translation of the statement:

“It should be noted that, based on the information available to the National Reference Center for Pesticides and Contaminants of the Ministry, there is no isolation of Salmonella Uganda in papaya. Additionally, it is known that this strain has been treated only to processed foods of animal origin.”

The statement said Mexican officials have requested more evidence to follow up on the investigation to determine how people were sickened.

In the meantime, the CDC is recommending consumers not eat, serve or sell whole, fresh papayas imported from Mexico, or foods that contain papaya from Mexico in the affected states.

There is no official CDC or FDA recall at this time.

However, at least one retailer in the Northeast, Schenectady, NY-based Price Chopper/Market 32 reportedly recalled Mexican papaya.

The supplier community has responded. HLB Specialties LLC, Fort Lauderdale, FL, BB #:270717  issued a statement assuring customers its products, both grown in and outside Mexico, are not involved in the outbreak.

Brooks Tropicals, Homestead, FL, BB #:110555 also posted a notice on its website that it is not involved in the current outbreak.

The Produce Marketing Association issued a statement on June 28 about the advisory. Chief Science & Technology Officer Bob Whitaker said there could be more Salmonella finds as the investigation continues.

“We have historically seen with Salmonella outbreaks related to papaya that regulatory agencies increase their surveillance testing. Therefore, it is possible there will be additional sources of Salmonella identified though not necessarily Salmonella Uganda nor connected in timeframe or distribution channels to the on-going outbreak. The industry should be aware that this could result in secondary recalls. This is just a point of awareness and the only suggested action is to re-affirm your recall system and team should history repeat itself.”