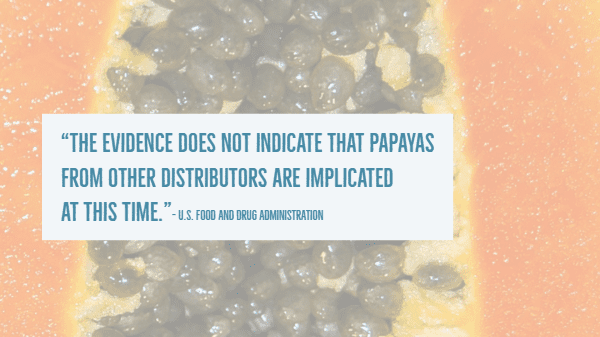 The CDC and FDA say epidemiological and traceback information in the ongoing investigation of a Salmonella Uganda outbreak that has sickened more than 70 people is linked to one shipper in Bronx, NY.

The agencies say traceback points to Agroson’s LLC BB #:275358 as the sole distributor of Mexican papayas that made consumers from this outbreak sick. Agroson’s markets the Cavi brand.

To date, there have been no positive product samples, according to information updated by the FDA on July 5.

“The FDA has consulted with the firm on the possibility of a recall,” the update said. “Should that happen, the FDA will update this advisory, including any recalled products, as more information becomes available.”

The advisory goes further, saying “the evidence does not indicate that papayas from other distributors are implicated at this time,” and that “FDA is narrowing its recommendations to consumers, restaurants, retailers, importers, suppliers and distributors, limited to Cavi brand whole, fresh papayas.”

This comes days after a July 1 statement by Mexican officials saying the CDC and FDA’s advisory on Mexican papayas was premature, and that there has been “no isolation of Salmonella Uganda in papaya,” and that the strain is more commonly associated with processed foods of “animal origin.”