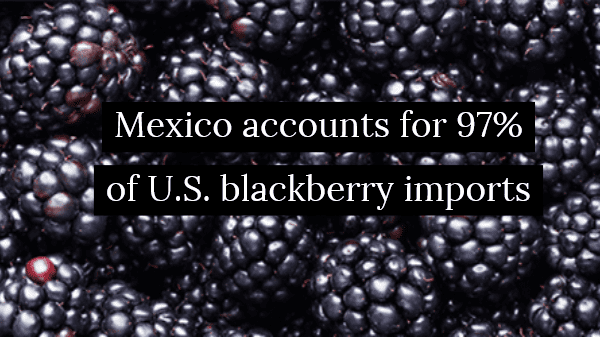 As the blackberry import season finishes and domestic volume – mostly from California – fills the summer pipeline, it’s important to note where the berries come from the rest of the year.

According to USDA’s Economic Research Service, Mexico represents 97 percent of the U.S.’s fresh blackberry imports. And of that huge volume, 96 percent of that comes from the state of Michoacán, producing over 260,000 tons, Ruben Medina Niño, head of the Secretariat of Rural Development and Agricultural Food (Sedura), stated to MiMorelia.

The state of Jalisco comes in a distant second, producing around 7,000 tons annually, he said.

Medina Niño said Michoacán has an area of 12,000 hectares used for blackberry production. While also stating that Sedura is giving great importance to the phytosanitary needs for the export of the fruit, irrigation, and support to producers through macro-tunnels and greenhouses.

In addition to this, a phytosanitary program was started in an effort to transition the land from chemical fertilizers to organic fertilizers and boost the productivity until doubling production per hectare.