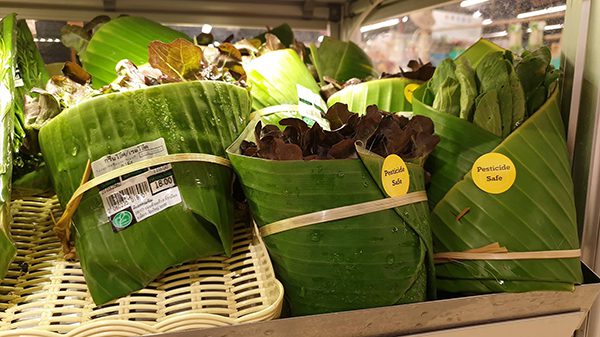 While Trader Joe’s in the U.S. has committed to reducing the amount of plastic packaging in its produce departments, most retailers on this side of the pond haven’t done much that’s specific to produce.

Out there in the wide world of retail?

On one hand, we’ve got Marks & Spencer, Tesco, Aldi and Iceland (the grocer, not the country) piloting either plastic-free or reduced-plastic initiatives.

There’s even a retailer in New Zealand promoting higher sales by merchandising what it calls “food in the nude,” a catchy way of saying bulk.

But then, there’s this.

The company already offers biodegradable shopping bags that break down in eight months when discarded, zero Styrofoam biodegradable containers, and a fun reminder to consumers that “it is so nice to reuse” cardboard boxes picked up in-store.

The new banana leaf packaging was posted to social media by a real estate company, where it has promptly gone viral. Pictures show things like cucumbers, asparagus and bananas wrapped in banana leaves and tied with a piece of bamboo.

Are we, in the U.S., prepared to go plastic-free? I’ve often discussed that there some compelling reasons we’re packaging some items, like those that enhance shelf life, and that we really need to be looking into improving our recycling system if we want a meaningful impact on reducing pollution from discarded plastics.

Many items marked recyclable are simply going to the trash – even though consumers think they’re doing the right thing by separating and sending to their municipal systems — and this is a problem.

But even at South by Southwest, where I expected to hear extreme arguments against plastic and packaging produce, one of the panel discussions that was asked about packaged produce had a surprisingly reasonable debate.

Panelists in the session The Future of Eating, covered topics like personalized food, local, technology and sustainability.

Moderator Robyn Metcalfe, Director of Food + City, a non-profit organization that is a “platform for bold exploration of the global food system,” pointed toward innovation in edible packaging, but also said that there are trade-offs when it comes to packaged produce.

“If packaging impacts food waste in other ways, such as food safety and shelf life…it can be a paradox,” Metcalfe said.

Henry Gordon-Smith, Founder and Managing Director of Agritecture, also pointed to research that consumers value something that’s local over a reduction in packaging, which I’ve mentioned in the past.

Max Elder, Research Director for the Food Futures Lab at the Institute for the Future, said that kind of good vs. bad thinking often reinforces an idea that’s not grounded in fact.

“This type of research makes me nervous because the distance food travels is a nominal percentage of the environmental impact,” he said. “Most of it is production. It is much more sustainable to for you to eat food grown far away if it is plant-based than it is to eat local grass-fed beef.”

Consumers aren’t sure what’s right or wrong when it comes to packaging, said Art Markman, Professor of Psychology & Marketing at the University of Texas.