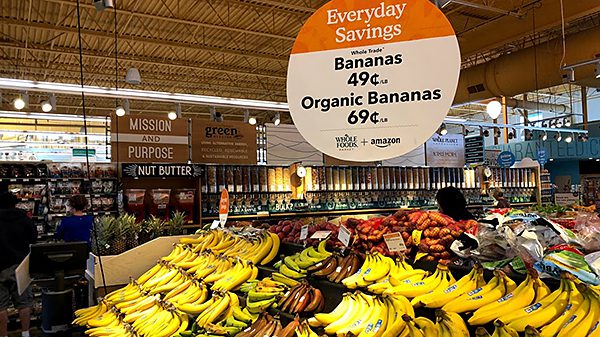 The past 18 months have been the quiet before the storm. The grocery world was shaken when Seattle-based Amazon bought Austin, TX-based Whole Foods Market Inc.

Was this the beginning of the Amazon invasion of grocery?

Retailers across the U.S. upped their digital fulfillment — both pickup and delivery — either by joining up with a third party like Instacart or expanding their own in-house offerings.

And very little good came out of Whole Foods and Amazon in the first year, if we’re going to be honest here.

Price reductions, that weren’t actually savings in the long run.

I live in the Austin, Texas, area. I watch Whole Foods closely. There’s a 365 right next to my house. I still CAN’T GET DELIVERY.

When Whole Foods was acquired, I immediately thought:


A week or so before the acquisition was announced, in June 2016, I sat through a panel of Generation Z shoppers at United Fresh talk about their opinions of online ordering. Every single attendee expressed disdain for the idea of groceries delivered by Amazon.

But, what if those groceries were picked and delivered by Whole Foods? That’s no cardboard box tossed on a porch only to be stolen by a neighbor while you watch with a digital doorbell.

This is a complete image makeover. Whole Foods has a tremendous amount of equity in its brand, especially among younger shoppers. It also has cost perception issues, but I think the widely-reported price reductions, and Amazon Prime deals in-store, have done a lot to dispel that image.

Now, the Wall Street Journal is reporting Amazon plans to expand the Whole Foods footprint to more mid-market areas, like Utah and Idaho, to new locations that are slightly larger to accommodate expanded pickup and delivery fulfillment.

Well, my friends. Game on.