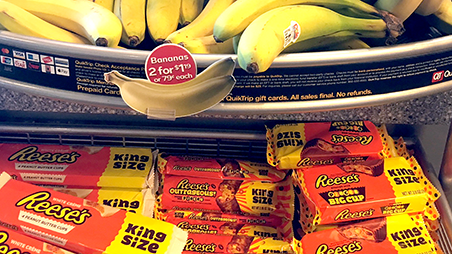 This display at a convenience store perfectly sums up why bananas easily sell for so much at these locations.

There are lists all over the internet of industries that millennial age consumers have killed – diamonds, napkins, beer, home ownership, print news (YIKES!), Applebee’s – but there’s one that those of us who follow retail produce should be watching: bananas.

Saying millennials might “kill” bananas is an extreme, and meant to be provoking. But, let’s think on this for a minute.

My topic was the retail price perception of bananas in North America, based on a conversation I recently had with Jennie Coleman, president and CEO of Equifruit, a Montreal-based Fairtrade banana supplier.

Bananas are cheap. They’re too cheap. We all know they’re too cheap to be sustainable in the long term. Retailers in North America have kept their banana prices low for decades, sometimes into loss-leader territory, to maintain a price perception that I think is becoming outdated.

It used to be that “everyone knows the price of bananas,” but I really don’t think that’s true for Millennials, and even Generation X, and CERTAINLY not Generation Z consumers.

If you’re holding your banana prices low to market to these groups, you’re missing the target. That’s marketing to a millennial’s grandmother.

The gap in likelihood of purchase for millennial and generation Z consumer purchase of bananas continues to widen. These consumers choose items like berries, club and branded apples and mangoes.

Seven or eight bananas is a big ask for some of these consumers, who can’t seem to plan farther ahead than breakfast.

Couple that with the troubling sustainability story in much of the banana world, and it could be a recipe for a sharp decline in demand. There are exceptions, of course, with organizations that are working to change these conditions, but it’s an uphill battle from almost every angle: marketing, supply chain and retail.

I showed a series of pictures to the WBF group, painting a bleak picture of retail, from 39 cents a pound up to 99 cents a pound.

Where were bananas NOT cheap, though?

Bananas are a thriving addition to these locations because they’re a natural trade up, nutritionally, from candy bars or potato chips.

It’s an easy swap for a captive audience. Paying 50 cents or a dollar for a banana is no big deal when your alternative is 500 calories of chocolate for the same price.

I’ve seen a few retailers take a stand with banana prices, but they’re few and far between. The good news is, most of the retailers I know of who lowered prices to match Amazon’s Whole Foods price ploys only lasted a few months, at best.

That steep loss of margin puts a lot of pressure on other produce categories.

Something has to give, or bananas will be the latest entry on this:

Pamela Riemenschneider is the Retail Editor for Blue Book Services. You can reach her at PamelaR@BlueBookServices.com.