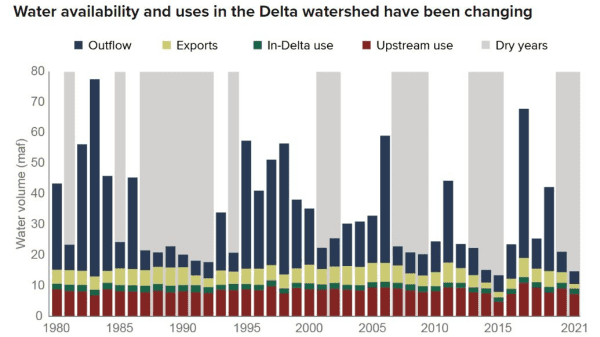 If you don’t understand the California water scene, you’re in a large company. Most of the state’s residents don’t either.

Partly because it is almost impossibly complicated.

Some explanation is in order.

In the first place, most of California receives practically no rain between May and November. Agriculture thus relies heavily on irrigation, using water from the great state and federal water projects.

The state’s Central Valley—the heart of its agriculture, including the produce industry—runs some 450 miles more or less north-south (more or less) between Redding in the north and Bakersfield to the south. It is 40-60 miles wide at various spots.

These rivers are largely fed by rainfall, runoff, and snowmelt from the Sierra Nevada Mountains in the east.

The three-year statewide drought (labeled as “extreme” in many areas) from 2019 to 2022 cut into much of this supply. California: Water, Politics – Rural Migration News | Migration Dialogue (ucdavis.edu)

The torrential rains of the past few weeks (which delivered 15-25 inches of rain to various areas) have put an end to the “extreme” aspect of the drought.

But they have resurrected a perennial issue in the fertile but semiarid state. It focuses on the Delta, which is fed not only by the Sacramento and San Joaquin rivers, but other rivers coming down directly from the Sierras.

The Delta is not only the center-point of California’s water system but of controversies about it.

These have to do with how much water should be allowed to flow through the Delta into San Francisco Bay and how much should be diverted for agricultural use (especially in the San Joaquin Valley).

Agricultural interests want more of the Delta water pumped south so they can grow crops without having to delve even further into their depleted groundwater supplies. Of course, they feel this need especially acutely now, after years of drought.

Environmental interests want to keep the Delta flow-through high to maintain it as a wildlife habitat.

The Delta is home to some endangered species, such as the delta smelt, which of course makes the issue more acute. As California’s delta smelt spirals toward extinction, a future in captivity awaits – Los Angeles Times (latimes.com)

The torrential rains have renewed this decades-old controversy.

A Los Angeles Times article drew a great deal of attention when it cited figures from the federal Bureau of Reclamation saying that nearly 95 percent of the water passing through the Delta will go into the ocean. Anger flares as California stormwater washes out to sea – Los Angeles Times (latimes.com)

The Democrats control both the governorship and the Legislature. This helps explain why many California agricultural leaders (rightly or wrongly) contend that the state government is blind to their interests, such as increased Delta pumping.

This article is not a call to action, nor does it engage in editorializing.

It is simply explaining some basics without which you just won’t understand what’s going on with California water.

It took me some years to figure all this out, so I’m trying to make it easier for my readers.