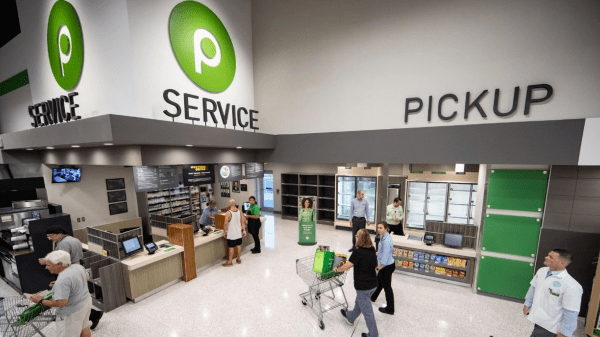 Kroger had maintained a strategy of staying out of Florida until recently. When it did announce plans to enter in 2017, it was with an ecommerce-and-delivery-only solution. Kroger opened its Ocado-powered, robotic fulfillment center in Groveland in 2020 at a cost of $55 million.

Kroger also has two hubs in Jacksonville and Tampa and plans to open smaller fulfillment facilities in South Florida, including a micro-fulfillment center powered by Ocado. Kroger sees Florida, with its fast-growing population, as a test market for expanding this model into the Northeast.

The Kroger ecommerce-only approach results in slightly lower prices than Publix can offer, as well as speedier delivery in many cases.

However, he suggests that Publix can use its reputation for customer service to counter Kroger’s expansion in the market.

“Do you want to be served by Betty the Butcher or Bob the Robot?” he asks.

Further, he says the chain’s existing and successful relationship with Instacart can also help Publix differentiate itself in a positive way.

“Instacart has been using Publix to promote its new initiatives, like deli sandwiches and prepared foods,” Lempert notes. In fact, Publix has been employing billboards to highlight its relationship with Instacart whenever Kroger enters one of its markets.

Speaking of ecommerce, another giant is also expanding its presence in the state.

“Amazon is making a clear play in Florida by building robotics fulfillment centers and delivery stations costing in the billions of dollars,” adds Carol Spieckerman, president of Spieckerman Retail in Bentonville, AR.

This is an excerpt from the Florida Supplement in the September/October 2022 issue of Produce Blueprints Magazine. Click here to read the whole supplement.