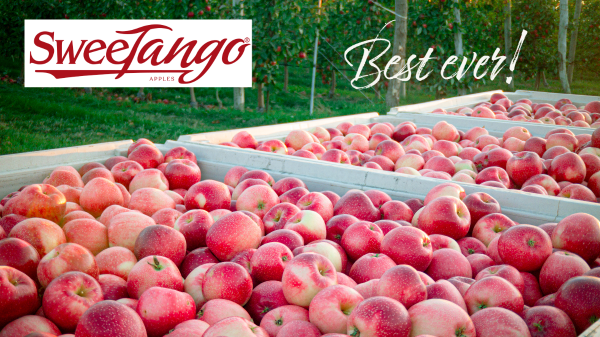 Swedesboro, N.J. – SweeTango apple growers and packers are universally singing the praises of this year’s crop, and urging retailers to place orders now to take advantage of the brand’s marketing plans.

“I don’t remember ever having as nice a crop hanging on the trees as we’ve got this year, both volume and quality,” said Scott Swindeman with SweeTango Midwest Region sales desk Applewood Fresh BB #:348232. “With this high quality a crop, it is going to sell itself.” 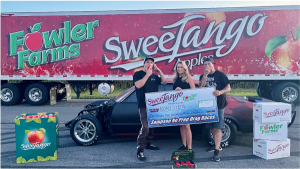 “We’re excited to get back into the marketplace with this crop,” agreed Austin Fowler of SweeTango’s Eastern Region sales desk Fowler Farms BB #:122041. “SweeTango is the kick-off of the entire apple season, it just doesn’t get any better. It’s easy to be enthusiastic about this apple.”

“This year without a doubt will be the best eating experience ever, the flavor is the best bar none,” added John Cushing of Eastern Region sales desk New York Apple Sales. “Once a customer has taken a bite, they will come back for more.” 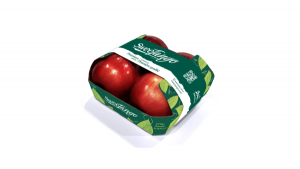 “This apple has proven its success over many seasons. It consistently ranks as the top club apple, and a top-10 apple variety, when it’s in the market” in both dollars and volume sold, Shales said. “Consumer demand has always been there. So let’s make sure we get it out there on promotion, and get people experiencing it early.”

This year, Next Big Thing, A Growers’ Cooperative (NBT) is coordinating a hub-and-spoke marketing strategy with its regional sales desks that will deploy both “push” and “pull” strategies to motivate consumers to purchase. In a year when some consumers might be concerned about inflation, SweeTango will prove its worth to consumers and retailers alike.

“We are really stepping up our targeted digital advertising and social media to leverage our passionate fan base, they are huge part of our marketing strategy,” said Jennifer Parkhill, NBT executive director.

Each respective sales desk will layer on its own regional marketing activities, including working with their respective retail partners to customize customer “pull” promotions, and partnering with local influencers. For example: The Central Region’s Applewood Fresh is working with its retail partners on in-store sampling, promotions and circular ads. The Eastern region’s Fowler Farms is geotargeting ads to reach their retail partners’ customers, and is sponsoring popular local drag car races. New York Apple Sales will be sampling fruit in-store and at industry events, and has opened an e-store to reach otherwise unserved consumer fans.

Responding to the pandemic-related rise in popularity of SweeTango’s 2-, 3- and 5-pound pouches, the Western Region’s Stemilt Growers is testing in limited markets a four-pack featuring larger pieces of fruit that typically sell bulk; the package’s materials are sustainably sourced. That four-pack, and an in-store display bin in use in some sales regions this season, preview a refresh of the brand’s shipping cartons and in-store packaging that will roll out in 2023.

To get SweeTango in front of influential retailers attending International Fresh Produce Association’s first-ever Global Produce and Floral Show in Orlando in October, SweeTango ambassadors will hand out apples packaged in a special single-apple pack at registration; buyers can then learn more about the brand and place orders with the sales desks during the show’s expo.

Early-season pricing for SweeTango is strong, reflecting the strength of the SweeTango crop in light of the smaller overall U.S. apple crop this year; SweeTango sales desks also report that retailers have been understanding about the economic pressures facing growers and packers.

“From the country’s biggest national retail names to leading discounters, they’ve been willing to listen about our increased costs, from inputs to labor to packaging to transportation,” said Applewood Fresh’s Coates.

Coates, the former retailer, talked up SweeTango’s trade-up sales opportunity. “Trade your customers over and up from low-margin varieties to SweeTango, that’s going to drive more sales dollars in your department,” he said. He also urged retailers to think more critically about the club varieties they decide to carry. “A great thing about SweeTango is there’s a national supply.”

Next Big Thing, A Growers’ Cooperative is a member cooperative of more than 50 family growers, spread over five time zones from Nova Scotia to Washington state. The co-op licenses, grows and markets premium, managed varieties of apples, beginning with SweeTango.

SweeTango’s signature taste, texture and quality stem from careful breeding, meticulously-selected growing locations and expert horticultural practices. Expert apple breeders at the University of Minnesota crossed the sweet Honeycrisp and the tangy Zestar! varieties to create SweeTango’s more complex, crowd-pleasing flavor profile: sweet, with a touch of citrus, honey and spice. First introduced at retail in the United States and Canada in 2009 and supported by coordinated strategic marketing, this brand has grown into a perennial top-5 trademark apple. SweeTango is a registered trademark of Regents of the University of Minnesota. More information on SweeTango can be found at www.sweetango.com or on Facebook at www.facebook.com/sweetango, @SweeTango on Twitter, and sweetango_apple on Instagram. 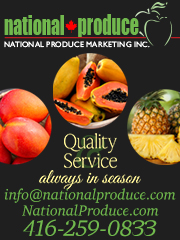