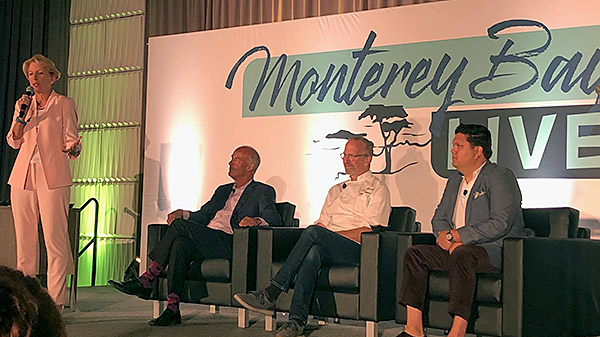 A panel at IFPA’s annual Foodservice Conference pondered many challenges confronting the food segment, and one major theme was creating systems and processes that give people greater access to high quality fruits and vegetables.

MONTEREY, CA – For foodservice professionals to get people to eat more fruits and vegetables, they have to think big.

A panel at IFPA’s BB #:378962 annual Foodservice Conference pondered many challenges confronting the food segment, and one major theme was creating systems and processes that give people greater access to high quality fruits and vegetables.

Michel Nischan, founder and chairman of Wholesome Wave, said innovation comes out of creative people in independent restaurants, but they are too small to create big changes in American consumers’ consumption habits.

He said he’s a huge proponent in produce prescriptions, one of IFPA’s recommendations to the Biden administration ahead of the September conference on food and hunger.

Schools are another vehicle to reach large numbers of people, Nischan said, as well as working with big food companies.

“You have to make food that’s good for lots of people,” he said. Younger consumers want to know the story behind their food, so “if they want the story, give them something to read. We market transparency and flavor.”

For instance, for Nischan’s ethnic recipes, he works with chefs from those backgrounds. “Ethnic food must be authentic,” he said.

Bruce Taylor, CEO of Taylor Farms, said his company supplies many restaurant chains, and it constantly asks questions of its customers to see where demand is.

One thing the company heard was the desire for fresher and more local produce, so Taylor Farms has invested in growing areas and processing facilities across the country.

As far as innovation goes, the company challenges every employee to be creative and present ideas for improvements without fear of failure.

“Everyone is challenged to innovate,” he said. “We learn from mistakes and don’t repeat them.”

Taylor said produce consumption won’t rise because of low cost but because of high quality and memorable eating experiences.

He said he also supports the push for more government help in getting fruits and vegetables to consumers, whether through schools or SNAP or produce prescriptions.

“I’ve never looked at government to help us,” Taylor said. “But they may see that keeping people healthy is cheaper than fixing them. But no one will eat their vegetables because the government told them.”